Home
»
Interviews
»
An Interview with Adam Biles of Shakespeare and Company 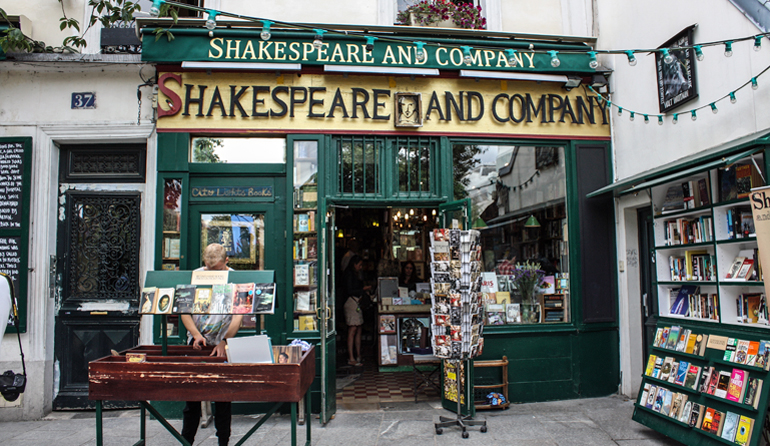 Shakespeare and Company is one of the best-known bookshops in the world. The first time I visited was a hot summer’s day many years ago. I was a little embarrassed about my tourist’s awe. I’d known a young woman taken in by the bookshop as one of their tumbleweeds, student writers who help in the shop during the day and sleep among the books at night. I felt lucky just to see the sun buffing the gold letters of the shop’s name. This year I was invited back as a visiting novelist.

Adam Biles, author of Feeding Time and events manager of the famed bookstore, is the man who brings authors to the shop. He chooses who to invite—from George Saunders and Karl Ove Knausgaard to Olivia Laing and John Berger—gathers everyone together for the reading, and takes writers to the little French bistro around the corner for dinner.

Rowan Hisayo Buchanan: What makes the shop so unique?

Adam Biles: How long have we got? Every bookstore is shaped over time by the people that work there and the readers that pass through. At Shakespeare and Company, it just so happens that it’s been here a long time—since 1951—that George Whitman, the founder, was a dyed-in-the-wool eccentric bibliophile, and that the people who’ve passed through include the near thirty thousand young writers who have lived in the bookstore over the years. So it’s had a lot of opportunity to develop some character. Being in a seventeenth century former monastery—a condemned building in a slum neighborhood when George moved in just in front of Notre Dame Cathedral—helps generate the unique atmosphere too. Towards the end of George’s life, his daughter Sylvia Whitman took over the day-to-day running of the store with her partner David Delannet. The pair of them run the place with a combination of restless energy and a love of books and people that never ceases to impress me. But don’t tell them I said that.

RHB: Do you have a personal favorite thing about the shop?

AB: Late in the evening, the atmosphere in the bookshop is very special. We close at 11 p.m., seven days a week, and there’s something particularly calm, particularly contemplative about that space in the hour or two before closing. The tumbleweeds curl up in corners to read, Aggie [Author’s Note: Readers may be interested to know that Aggie gets her name from Agatha Christie because the little brown cat just showed up one day in the mystery section] the shop cat strolls around, like a night watchman.

RHB: You must have so many authors and publishers hoping you’ll stock their books. What makes you decide to order a title in?

AB: Because a physical bookshop will always be limited in space, the choice has to be carefully curated. Luckily that task doesn’t come down to me. Our head buyer Linda Fallon, who has just celebrated ten years at the bookshop, strikes the perfect balance between new literary titles, classics, poetry and the kind of books that people might want to buy when they’re in Paris. We’ve recently expanded our children’s section too, and hope to do the same with art and graphic novels. The books you give display space to will inevitably reflect the values of a bookshop, so if you look on our nonfiction table today, for example, you’ll see new books by Naomi Klein, Reni Eddo-Lodge, and Ta-Nehisi Coates, alongside classics by Howard Zinn and James Baldwin.

RHB: You describe the books as reflecting the values of the bookshop. I wonder if you had a sentence or two on what those are?

AB: George always liked to say that Shakespeare and Company was a socialist utopia disguised as a bookstore. But beyond any firm ideology, the real underlying value of the bookstore is hospitality: to the young writers who come to stay here of course, and to our readers, but also a hospitality to different ideas, different viewpoints, different voices. In our own age particularly, that manifests itself as us making sure that as many possible voices are given a fair hearing, particularly those who might not always receive one. So stocking books by writers of color, LGBTQ literature, books in translation from languages and cultures that are underrepresented (from houses like the brilliant Tilted Axis, for example), as well as from indie presses that publish challenging or unusual writing, is all very important.