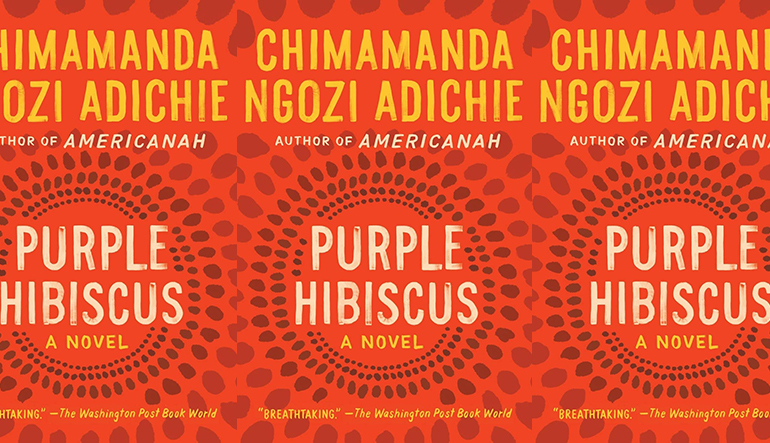 Kambili, the protagonist of Chimamanda Ngozi Adichie’s 2003 novel, Purple Hibiscus, is the daughter of Eugene, an important publisher in Nigeria. Nigeria is in the middle of a dictatorship; while many people flee, Kambili’s family is of a privileged class, and thus initially choose to stay. Despite this status, however, they are not immune to the damage inflicted by the dictatorship.

While living under a dictatorship, one’s carnal responses of flight or fight are in play. As Eugene’s sister, Aunty Ifeoma, says at one point, “When a house is on fire, you run out before the roof collapses on your head.” Living in a country with a dictatorship means living in a world where you watch your homeland, your home, catch fire. You can leave it and hope that all your loved ones make it out too, or you can stay and fight, hoping you don’t die from the burns, from the smoke in your lungs—in a dictatorship, no one gets away. When your home catches fire, then, it’s not a question about what do you want to do. It’s a question of what can you afford to lose.

Eugene speaks out against the dictatorship, about the wrongs and falsehoods he sees; he publishes critical editorials despite the death threats he and his employees receive. Eugene has the privilege and intellect and resources to combat the regime, and feels he has the responsibility to do so. As Edmund Burke wrote, “The only thing necessary for the triumph of evil is for good men to do nothing”; Eugene feels he needs to stay and do something, for if he does nothing, his home’s loss would be his own.

But to fight a dictatorship, Eugene has to be desensitized to the threats of violence he receives—and, ultimately, he enacts violence on those around him. When drinking tea, for example, Eugene passes around his cup so that the rest of his family can drink, but Eugene shares his tea when it is still too hot. Kambili drinks the tea despite the pain it causes her, telling us, “I knew that when the tea burned my tongue, it burned Papa’s love into me.” To Eugene, feeling this pain is a way of showing love for your home. Eugene is pained by all the things that publishing his editorials do to him and the people he works with and loves, but this is how he demonstrates his love for his country. When Kambili drinks the hot tea, feeling the pain Eugene shared with her, allowed Eugene to feel loved by her.

Eugene struggles, however, whenever he is opposed. He cannot afford to be self-reflective when facing a dictatorship. “Eugene quarrels with the truths he does not like,” we learn. He struggles to see out of his own worldview, and cannot question his decision-making when the stakes are so high. The flames are too high; he cannot waiver in his response.

This inability to waiver is apparent when Kambili watches a driver bribe a police officer, something that Eugene told her he would never do. Even when cops take their time searching the car, Eugene never pays. “We cannot be part of what we fight,” he tells Kambili. Kambili knows the car she watches will move along quickly, but she also can sense her father’s teachings: paying is letting a home aflame to continue to burn.

Eugene stands up to the dictatorship in the face of death threats to himself and his employees. The very traits he is praised for within the community, that help him stand up against the dictatorship, however, are the same traits that hurt Kambili, her mother, her brother. To riff off Audre Lorde’s statement, maybe one can tear down the master’s house with the master’s tools, but Eugene brings these tools into his home—and these tools have never done anything besides oppress those who live in houses such as his.

Later in the novel, when Eugene feels betrayed by Kambili, he beats her, badly. He has Kambili stand in a bathtub and then pours boiling water over her feet. When the tea burns Kambili’s lips, she equates it to love. Eugene is a stern man, as many who combat dictatorships are, but the boiling water on her feet does not come from her father’s love. What results is not a scar but an active wound. Eugene does not realize that he is becoming exactly what he fights. Preying on the weak, preying on those that rely on him to show them the way. Eugene burns Kambili in a way she may never fully recover from—just like how Eugene may never fully recover from the burns he receives fighting the dictatorship. The pain is cyclical. The fire rises.

Of course, you can always leave the burning home. Live in exile. This is what Aunty Ifeoma eventually does. Aunty Ifeoma speaks the truth against the dictatorship; when one woman warns Ifeoma that she is on a list of people who are “disloyal” to the regime, Ifeoma says when she speaks “the truth, it becomes disloyalty.” Dictatorships lash out against truths that don’t flatter them. (Despite Eugene’s desire to not be a part of a dictatorship, this trait is eerily similar to how Eugene deals with the “truths he does not like,” further solidifying the parallel between the two.) Aunty Ifeoma tells Kambili’s mother to leave Eugene after a particularly brutal beating, she speaks the truth about the burning home she sees. Aunty Ifeoma says, “This cannot go on…When a house is on fire, you run out before the roof collapses on your head.” Eugene thinks he is putting out a fire, but he is actually pouring gasoline all over his home. The family’s country and home are on fire; the roof is collapsing on all of them. To Aunty Ifeoma, there comes a point where staying is no longer an option.

When Aunty Ifeoma’s office is raided, Kambili’s cousins talk about the possibility of having to leave Nigeria. Leave their home. Cousin Amaka asks, “Why do we have to run away from our own country? Why can’t we fix it?” Amaka believes that it is their responsibility to stay and help fix their home. They need to put out the fire. Cousin Obiora responds by saying what they are doing is “not running away, it’s being realistic. By the time we get into university, the good professors will be fed up with all this nonsense and they will go abroad.” He thinks that the tools needed to destroy the master’s house are not available to those who stay in Nigeria.

Aunty Ifeoma fears what exile will bring to her family. A friend of hers talks about how living in exile is unnatural. How one who leaves will be viewed by Americans as a “monkey who had developed the ability to reason.” The friend says doctors and lawyers drive taxis and wash plates in restaurants in the United States. You can’t nurture and develops skills in a new place that doesn’t trust you have any. Escaping a burning home does not mean you have a new one.

Aunty Ifeoma’s friend thinks the only way to live is to stay. “The educated ones leave, the ones with potential to right the wrongs. They leave the weak behind,” she says. “The tyrants continue to reign because the weak cannot resist. Do you not see that it is a cycle? Who will break that cycle?” To her, the fires will not stop if people keep running. Good people can’t afford to do nothing, or their home will turn to ash, to nothing, at the hands of evil men. But Aunty Ifeoma sees what is happening in her homeland, in her brother Eugene’s house. So she takes her children and lives in exile. Kambili says that Aunty Ifeoma “ignores the present to dwell on the past and future.”

Adichie’s novel shows a homeland and a home on fire. For the generation living through the dictatorship, regardless of whether they leave or stay, they lose a home. Good people have responsibilities that will get the smoke in their lungs, that will burn them. They themselves will turn to ash, to nothing. And those who run will only know a home in the past tense. But the cautious optimism of the novel lies in the next generation, in Kambili, her brother, and her cousins. There is a chance they can break the cycle, outlive the fire, and maybe use the space to plant their gardens, to make their homes.