Home
»
Writing
»
Writing Advice
»
The Candles and the Soap: On Vonnegut, Death, and Repetition 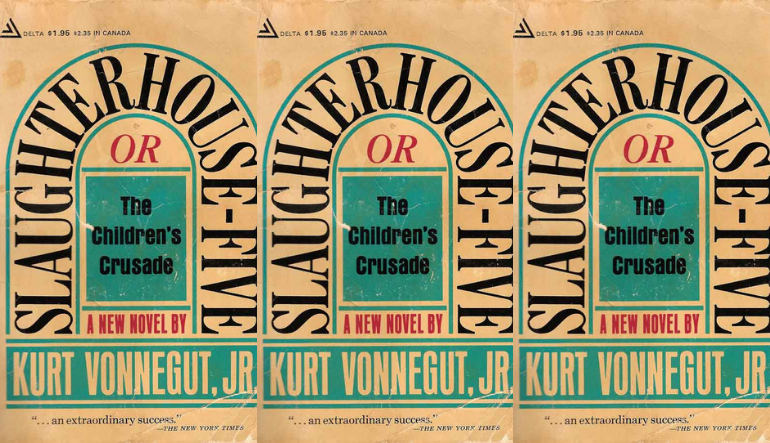 Placed after a mention of death or dying, Kurt Vonnegut’s “So it goes” refrain throughout Slaughterhouse Five utilizes repetition to explore the inevitability of death. Early on in the book, Billy Pilgrim writes a letter to a newspaper about his experiences with extra terrestrials, and explains the origin of the phrase:

When a Tralfamadorian sees a corpse, all he thinks is that the dead person is in bad condition in that particular moment, but that the same person is just fine in plenty of other moments. Now, when I myself hear that somebody is dead, I simply shrug and say what the Tralfamadorians say about dead people, which is ‘So it goes.’

The phrase simultaneously dismisses and accepts the inevitability of death. “So it goes” seems so detached as to be irreverent and inappropriate. An incredibly simple three word sentence—so informal it catches the reader off guard in its plainness—is striking in juxtaposition to death. The phrase is so casual, it smacks of false familiarity and dismissiveness. It feels unceremonious, yet becomes ceremonious through its repetition, like the refrain of a song. It is so much more complex than just those three simple words; it admits the inevitability of death and offers a pause for the reader to truly consider the weight of what is written.

Removing the repetition of “so it goes” from the text alters the book—note how the omission of it from the above paragraph makes the sentence so dark and depressing it’s almost impossible to read. Stripping the informal refrain of “so it goes” makes the book too formal, too gloomy; it robs the deaths their due attention, their pause, and removes the carefree yet careful acceptance of the uncompromising inevitability of death. Nothing can be done about death, and Vonnegut’s cool acquiescence of it serves as deeper advice than at first glance—a mantra of sorts.

“So it goes” is the best-known example of repetition in the book, but Vonnegut’s prose is loaded with the literary device. In the line above, for instance, “the candles and the soap” is repeated twice in the same paragraph. It has a lovely cadence to it, and draws the reader’s attention to seemingly unimportant household objects that hold deeper significance. After one reads this, candles and soap don’t look so innocent.

The most important thing I learned on Tralfamadore was that when a person dies he only appears to die. He is still very much alive in the past, so it is very silly for people to cry at his funeral. All moments, past, present, and future, always have existed, always will exist. The Tralfamadorians can look at all the different moments just the way we can look at a stretch of the Rocky Mountains, for instance. They can see how permanent all the moments are, and they can look at any moment that interests them. It is just an illusion we have here on Earth that one moment follows another one, like beads on a string, and that once a moment is gone it is gone forever.

Coming back to Bill Pilgrim’s letter to a newspaper, Vonnegut again employs repetition. Writers are oft encouraged to use a wide range of words, keeping a thesaurus at hand and freshening up the prose so it doesn’t get repetitive. Yet repetition has a place. Here, the word “moments” is used six times in one paragraph. The phrases “always have existed, always will exist” are reminiscent of Catholic prayers or Buddhist scriptures, and smacks of reverence—compounded with the mention of “beads on a string,” as if alluding to prayer beads or rosaries. The last line repeats “gone” twice: “once a moment is gone it is gone forever.” The reiteration of a simple word like “gone” brings more weight and attention to a simple, straightforward, four-syllable word.

Life is repetitive, and there’s an honesty to Vonnegut’s prose. Bill Pilgrim’s lack of fresh vocabulary paints him as a simple character, a common man, yet the subjects he’s dealing with—death and time travel—are things most avoid. The use of repetition allows the main character to become accessible, when most might find a time-traveling, Tralfamadorian-loving man incomprehensible. Despite the fact that Slaughterhouse Five deals with subjects of death, war, and time travel, it has remained an American classic. Author Tim Horvath noted that Vonnegut writes “esoteric subject matter presented in exoteric language or form.” The accessibility of language, aided by repetition, affords the book a certain readability, even making it funny and joyful. So it goes.