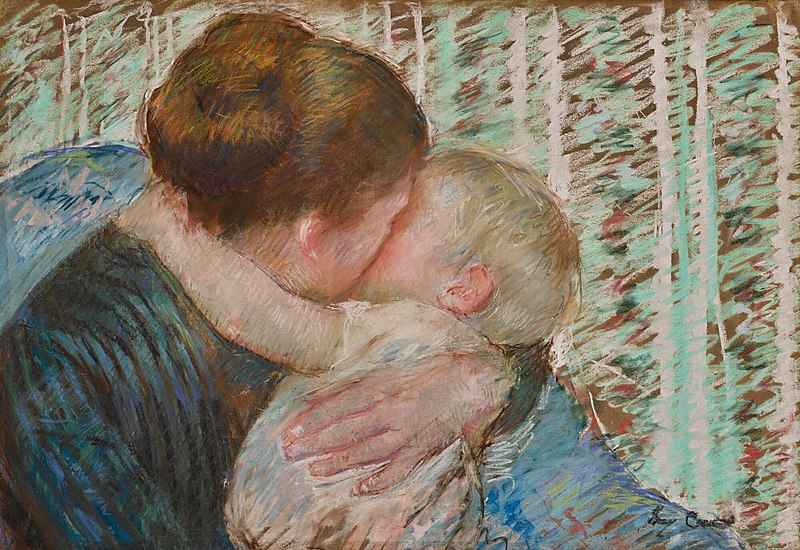 One question I’ve been getting a lot in the 3.5 months since my daughter was born has been, “How is being a mother different the second time around?” I have several answers to that question, all of which can be neatly summed up in one overarching statement: I know myself better.

I know I trick myself into believing my body doesn’t require sleep until it’s too late. I know I can be really mean to myself about belly fat. I know any feeding challenges make me extremely anxious. I know that I can never quite tell if my baby is hungry, tired, or gassy at any given moment.

Most importantly, I know myself as a mother. When my eldest was born I experienced an identity crisis. I was overwhelmed by a love that was so powerful as to feel toxic. My brain was hijacked by caretaking, and leaving any energy for my own needs and desires was a daily struggle. I ended up fighting to balance out the different parts of my personality: the mother and the person. Writing was especially difficult. It already took so much self-hand-holding to get myself to that blank page, and attempting to do so when I felt I had to be somebody else for my child was almost insurmountable.

Now, the word “mother” is already an ingrained part of my identity. I’m called by it every day and answer to it without a thought. The identities of person and mother no longer feel dichotomous, which means I can do the work that makes me feel whole while also caring for my children. I have to figure out a lot of things with my new baby, but who I am is not one of them.

But what does a mother do when the core of her identity does feel fragmented? When she can barely remember her life before children and struggles to take care of them every day?

The narrator of Ilana Bernstein’s 2018 novel, Tomorrow We’ll Go to The Amusement Park, is a young single mother of two children, ages five and six. Over the course of a stormy week, she depicts her battle with an unnamed mental illness that includes symptoms of anxiety and depression as well as nebulously described dissociative episodes as she passively counts down the days until her rent extension is over and she and her children will be out on the streets. Both her symptoms and the side effects of her medication leave her feeling frazzled and sleepy, with holes in her memory.

As she shifts between making all sorts of plans for saving all of their lives and giving into imminent devastation, the narrator attempts to find enough energy and focus to work on a book—the same book in which she is a character. In this book, she wishes to offer her own story, though she struggles to recall even basic facts, such as what she used to do for a living and how she came to live in her current apartment. She is an unreliable narrator both in the book she is writing and the book she is written into, but she is also the perfect narrator for the story she wants to tell. She doesn’t care to share the specifics of her relationship with her children’s absent father or her history of mental illness. She makes vague mention of some of her darkest moments, such as the evening when her children were ages two and one when she walked out of the apartment and didn’t return for two days. Instead, she depicts the disorienting tornado of life with children who need food and attention that she can’t always provide, with neighbors who make malicious remarks, with a social system that threatens to institutionalize, and without money, food, or partnership.

What is most vivid in the narrator’s monologue, so harsh as to cut through the fog of the book’s intentional fragmentation, is the way the narrator is tugged and jostled by motherhood; how it takes over, saving her and destroying her at once. “Mothers hold society in one piece,” she writes. “They maintain order, providing children for the machine, sacrificing them to the Moloch. . . . If men understood the deep meaning of motherhood . . . But fathers don’t want to hear about the difficulties. Difficulties can shake them up. Men want to know they can rely on us. That we are well-oiled machines. And that if one of us falls off the line we just keep on going.” This is the story the character wants to tell, acknowledging that it would be dismissed by those wishing to ignore not only her own unique circumstances, which stem from the symptoms of her illness but also the inherent ugliness of any motherhood: The way children fill every silent moment with incessant chatter. The way their moods swing from content to demanding regardless of what one has to offer them. How mean they can be. How they can sometimes suck up every last drop of a mother’s energy. How a woman can regret having them in the first place.

“My psychiatrist once told me that an event becomes traumatic because we don’t predict it. A man crosses the street toward a falafel stand. He’s already imagining the crispy balls, the dripping tahini, the fresh pita, when all of a sudden—bam, he’s lying on the ground with a broken leg. That’s trauma. That’s how we define it. I couldn’t decide if childbirth is traumatic for the birthing mother as well as the baby. If children in and of themselves are trauma. If parenting is, in fact, a post-traumatic experience. All I knew was that I was lying on the ground with a broken leg.” This kind of statement is considered taboo even for this character, disconnected as she is from a normative lifestyle. “You love your children,” others tell her. “Every mother loves her children. You aren’t the first woman in the world to whom life was cruel. People overcome. Children can help you. Your children will save you, they said.” But she insists: “Life wasn’t cruel to me. I don’t want to be a mother. I don’t want two children. . . . I told them. I warned them. And they wouldn’t hear it. Anything to keep from shattering the sanctity of motherhood.”

It is often said that having children can help in managing depression and anxiety because one simply has no choice but to be pulled out of one’s own mind in the service of caring for them. The narrator of Bernstein’s novel is no exception. Time and again, having to answer to her children’s needs helps pull her from the brink of despair. And what’s more, this is something she’s good at. She manages to turn their turmoil into adventure, their hunger into appetite. She looks deeply at her children, notices their personality traits and quirks, identifies pieces of herself in them, and celebrates their uniqueness. But at the same time, having to feed them and remain awake for them takes everything she’s got, leaving her very little to invest in attempting to find the money needed to avoid eviction. “There were days,” she says, “not long ago, when the children were the only people I saw for days, or sometimes even weeks. I had to lift my head above our territorial water. Sometimes, more than once, I wanted to drown. To let go. Instead, I talked to myself, spewing out the statements I heard around me in loops. Being a mother is the most intense experience of my life, pregnancy and childbirth is a miracle, the most important thing is that I have two healthy children, children are a joy, the greatest happiness a woman can aspire to, I don’t know how I ever lived without them. And, truth be told, I really couldn’t remember what my life looked like before they were born.” She is rendered powerless because of parenthood and in spite of it. She sees the scars of trauma forming in her children’s minds as they fend for themselves and attempt to shield her from the world, but she is as helpless to change their own trajectory as she is to change hers, watching their life become derailed as if observing it from the outside.

Ultimately, this is a portrait of a motherhood so demanding and a depression so immersive that it becomes impossible to tell which came first. Is this the story of a mother working to care for her children in spite of the obstacles posed by her mental health? Or is it the chronicling of a woman whose mind has been injured by parenthood? Does she owe it to her children to overcome her circumstances, or are they the result of bringing these children into her life in the first place? Throughout the book, the symptoms of the narrator’s different conditions, including being a mother, become indistinguishable from one another, forming a chaotic storm of emotions that bleed into one another. “In terms of anything that had to do with kids,” Bernstein writes, “we barely saw fathers. This was a world of mothers. A world of women, women, educated and ignorant, who worked in the backstage of life without getting any appreciation. We were in a position of inferiority, most of the women around me. Most of them preferred to defend their position without realizing its effect on our bodies, on the way we presented ourselves to the world. On the way we treated ourselves. On the way others treated us.”