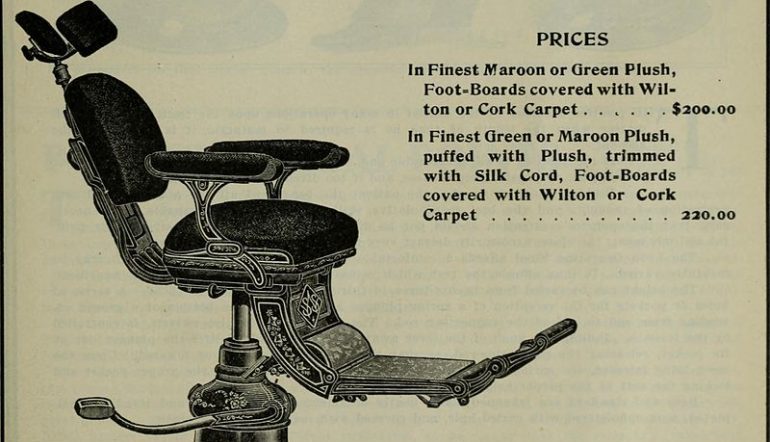 In Zadie Smith’s novel White Teeth, no matter the characters’ race or religion, they all have white teeth. Smith uses teeth as a symbol of unity, a shared feature that connects all people.  But what about when a mouth is filled with cavities? Or shiny veneers? There are many ways in which teeth can also set people apart. In the short story “Teeth” from the January/February issue of Kenyon Review Online, Erin McGraw explores classism and the power of wealth through the symbol of teeth.

This story is aptly set in a dentist’s office, where the narrator works as a receptionist. On this particular morning the narrator is late to work because her car wouldn’t start, and by the time she finally does get to the office Dr. Ross, her boss, is already working on a patient. “This patient must have been a walk-in,” thinks the narrator, “probably waiting at the door when Dr. Ross arrived. Meaning a mess in the mouth. Meaning no insurance. Meaning four or five wadded bills pulled from a pocket.” In these short declarative sentences, the narrator moves from talking about teeth to money to paying medical bills out of pocket without missing a beat. In her mind, all of these details are linked.

Dr. Ross’s assistant, Marnie, scolds the narrator for being late. “‘You know what to say to these patients. They listen to you,’ Marnie says, pretending she isn’t looking at the hole in my mouth where a tooth should be.” It’s one of the first major signals we get that the narrator is in a lower class than both Marnie and Dr. Ross, putting her in an interesting position. Clients may see her as part of the establishment—she’s the one who initiates conversations about payment plans, after all. But to her bosses, she’s in the same category as “these patients.”

At this point, the moans of the walk-in, a woman, can be heard throughout the office—even with the music turned up. The narrator listens as Dr. Ross gives his normal speech about viable teeth, and “how teeth are a structure meant to last a lifetime, but they require maintenance.” Sure, that seems logical. And someone with dental insurance and enough income to pay for this maintenance may nod along in agreement.  But after hearing this speech the narrator quickly thinks, “Does he know that everybody in town calls him Doctor Dollar?” Again, we see this quick transition from teeth to money, from the patient’s suffering to Dr. Ross’s profit.

The narrator then hears another voice coming from the examination room—the patient’s husband. She finds this curious because family isn’t normally allowed beyond the waiting room. Who would want to see “a dead, gaping hole” in their loved one’s mouth? Her interest piqued, the narrator moves a little closer, until she hears this woman’s husband (soon identified as Mr. Poole) say, “Take them all out.” It’s a hair-raising notion, one that Dr. Ross objects to at first. There are still viable teeth, he explains. He could be sued. But Mr. Poole, sounding exhausted, argues his case. Everyone in their family loses all their teeth eventually. He’s just trying to save his wife from pain. They both had to take the day off of work—without pay—so who knows when they’ll be back? And how big of a mess will his wife’s mouth be then?

Dr. Ross agrees. But first the Pooles must sign a waiver (a “Do Not Sue” form according to Marnie) and it’s the narrator’s job to explain to the patients what exactly they are agreeing to when they sign. “Marnie reminds me every month or so that it’s the most important part of my job. Of course it is. It keeps her from having to have an actual conversation with the portion of our clientele who don’t arrive in cars with good paint jobs and who really watch the TV in the waiting room.” So, according to Marnie, the most important part of the narrator’s job has nothing to do with dentistry at all, really. It has to do with money. And making sure that Dr. Dollar doesn’t lose a cent.

Up until this point, the narrator has remained an observer. She hides the gap of her missing tooth when she smiles. She notices things like Marnie’s expensive hair color, Dr. Ross’s shiny car, but she always keeps her thoughts to herself. But when Mr. Poole gives her his information she purposefully transposes a few numbers in his phone number and address. That way when he misses a payment it won’t hurt his credit. “It’s worked before,” the narrator says.

No matter how sympathetic or nice a doctor is, they are ultimately the one with the power. They have the training and the knowledge to heal you. So in this small, yet forceful, act of defiance, the narrator is giving some of that power back to the patient.

In the end, after estimating that Dr. Ross will probably only get sixty dollars for his work that morning, the narrator smiles at Mr. Poole, a smile that shows the gap where her missing incisor should be. And in this moment, her missing tooth is no longer a symbol of what class she’s in, but rather it’s a way to signal where her loyalties truly lie.