Home
»
Critical Essays
»
The Cocoon and the Vista: Rebecca Solnit and Czeslaw Milosz on Vastness 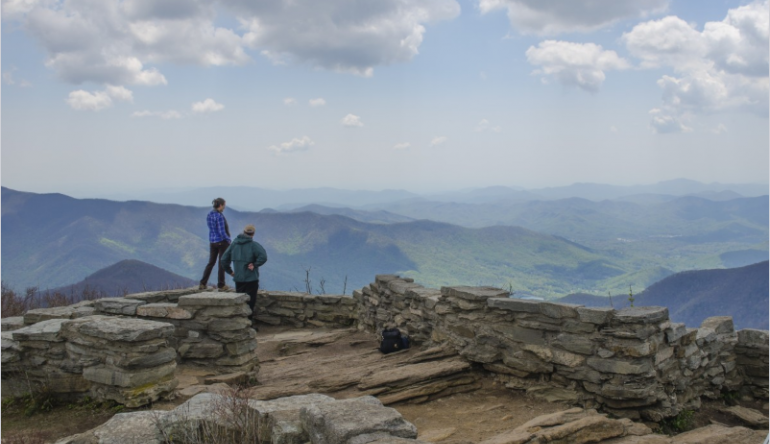 It’s spring again, and after months spent in the enclosed spaces (apartment, car, overheated university buildings) and tedious chores of winter (de-icing the car, keeping warm) I find myself outside again, drawn to sweeping statements about the vastness of landscapes, both urban and rural. In spring, the little town where I live feels suddenly expansive, with its flowering trees and wide flat roads. I’m thinking these days about how to convey expansiveness in writing without slipping into generality, nostalgia, sentimentality. For models, I turned to two collections of essays: Czeslaw Milosz’s Visions from San Francisco Bay and Rebecca Solnit’s Wanderlust: A History of Walking. Both Milosz and Solnit are concerned with conveying vastness, exuberance, and the pleasure of seemingly endless vistas. Both have an ambitious eye that observes landscapes in their full complexity, and doesn’t shy away from conveying the romantic allure of, say, a small desert town, or a rowdy parade down Market Street in San Francisco. Both Solnit and Milosz transform picturesque vistas into fully alive places on the page. Their methods are instructive not only for writing about place, but as tools for toggling between any set of Big Questions and the particulars of moving as a body through streets.

Solnit’s essays on walking alternate between personal experience and historical narrative. In one of Wanderlust’s later chapters, titled “The Solitary Stroller and the City” Solnit begins with an image of encountering San Francisco anew after a long absence. The early sentences of the chapter are crackling with energy and color: “I walked everywhere in the balmy days and nights of May, amazed at how many possibilities could be crammed within the radius of those walks.” She doesn’t shy away from big pronouncements about the pleasures of walking in San Francisco, and the sentences are breathless, dense with meditations on the nature of cities in general:

Cities have always offered anonymity, variety, and conjunction, qualities best basked in by walking: one does not have to go into the bakery or the fortune teller’s, only to know that one might. A city always contains more than any inhabitant can know, and a great city always makes the unknown and the possible spurs to the imagination.

Solnit goes on to make distinctions between urban and rural walking, and then launches into a history of streets and cities that spans London to New York, and weaves in voices from Wordsworth to Woolf. She matches the vastness of personal experience—the “jumble of possibilities” that make up San Francisco—with a different vastness, that of other cities and other walkers in a variety of historical moments. This combination of historical and personal expansiveness makes itself felt in the language of the essay: for example, Solnit classifies “urban walking” as something that can easily turn into “promenading, shopping, rioting, protesting, skulking, loitering.” The essay begins with a delight in the intricacies and possibilities of a city: and then it moves this delight onto different planes (historical and literary), maintaining the energy of the general as it touches down on different particulars.

In Visions from San Francisco Bay, Milosz’s essays begin from even broader premises than Solnit’s. With titles like “Religion and Space” and “Migrations” the essays unabashedly devote themselves to Big Questions. On occasion, they get lost in generalities or vagueness—and some, like “A Short Digression on Woman as a Representative of Nature,” veer towards the self-indulgent or outdated. Still, many of Milosz’s concerns in the book remain enticing: he’s interested in expanses, and the interplay between the “cocoons” we create for ourselves (physically, intellectually, emotionally) within the vastness of the American continent.

In “Facing too Large an Expanse,” Milosz, like Solnit, revels briefly in the pleasures of the vistas and landscapes in which he finds himself. He describes Mt. Tamalpais, across the bridge from San Francisco, “where the border of ocean and land, shattered into promontories, looks like the first day of creation, I stand stripped and destitute.” Milosz avoids reducing the power of vastness by refusing to make an argument out of the wordlessness he feels in the face of vast landscapes. He acknowledges, instead, an intense subjectivity that by necessity overshadows our perception of the natural world:

To itself neither beautiful nor ugly, nature no doubt is only a screen where people’s inner hells and heavens are projected. But the majestic expanse of the Pacific seacoast has imperceptibly worked its way into my dreams, remaking me, stripping me down, and perhaps thereby liberating me.

In this passage, Milosz acknowledges the folly of using nature as self-reflective even as he admits its powerful effect on him. The essay concludes with the speaker musing on a central conundrum of writing. Milosz writes of the dual impulse to avoid “that chaos which dispenses with valuation” and the knowledge that in order to make lasting work, the writer must “clash with what awaits me close at hand” —that is, the “mountains and the ocean […] those many moments when I have gazed upon boundless immensities.”

Perhaps what’s most helpful about both Solnit and Milosz’s work is the authors’ willingness to engage with a world beyond the self, to see introspection and isolation as an essentially limited route to creativity. As Solnit writes: “In small doses melancholy, alienation, and introspection are among life’s most refined pleasures.” What seems key to me here, especially after emerging from the suffocating indoor spaces of winter, is Solnit’s insistence on “small doses.” Even a failed attempt to engage with the world beyond the “cocoon” is a valuable act.