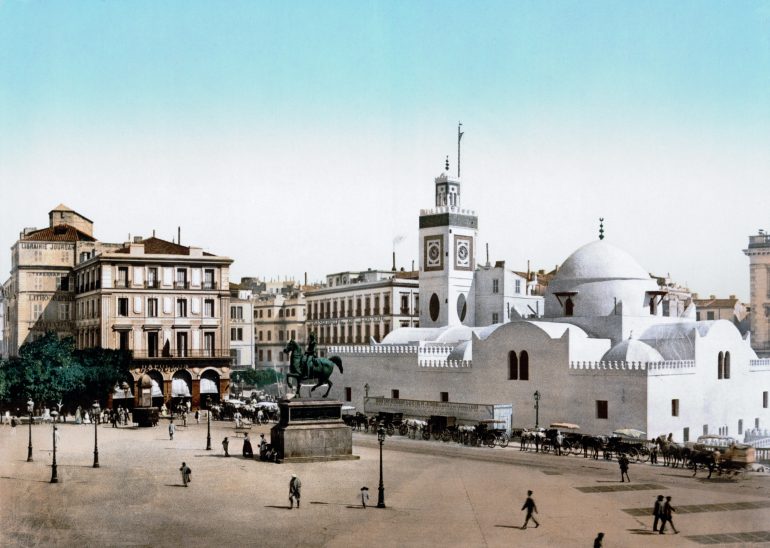 Asking to whom a country belongs, let alone considering whether the descendants of former colonists have a right to call a former colony home, feels profane. Yet, to not acknowledge the memories of groups like the pieds-noirs in Algeria is an act of erasure–albeit one that swims through the murky waters of colonial history.

Claire Messud’s novel, The Last Life, intimately considers the legacy and trauma of the pieds-noirs through the story of a family living in Marseilles, France in the 1980s and 1990s. Sagesse LaBasse, the narrator, is the daughter of a pied-noir father and American mother who in the end chooses to take on an American identity after a series of events that causes her to leave her hometown as she reconsiders her family’s history.

Sagesse didn’t ask to be born into her former colonial family, with its customs and French dialect that “were the antiquated trivia of an Algerian life no longer extant, or rather, existing only in such households as her own, and as a result of virtuosic mimicry all around.” The pieds-noirs, who were often not even ethnically French but were more often Spaniards, Italians, Maltese, Swiss, or North African Jews who became French citizens under French rule in Algeria, Tunisia, and Morocco, were considered to be one of the largest diaspora groups in France in the twentieth century. According to Benjamin Stora, a historian of French Algeria and a descendant of Algerian Jews himself, the pieds-noirs are part of the “crisis of French national storytelling, in that France historically has seen itself as a place of assimilation and integration.” They do not fit neatly into the narrative of France where every immigrant becomes a part of the contemporary French mainstream, instead clinging onto what makes them different. Additionally, the pieds-noirs often have a “rosy picture” of their past says Stora, one which celebrates their former high place in Algeria above native Algerians, which is problematic in contemporary France—due to the overwhelming anti-colonial sentiment and the co-opting of the pieds-noirs’ story as a symbol of greater France by Jean-Marie Le Pen, founder of the National Front—the time during which The Last Life takes place.

The Last Life acknowledges how problematic the history of the pieds-noirs is; indeed, at the crux of Sagesse’s struggles is her understanding of and reconciliation with her inherited history. She realizes that her grandfather, who turns the family’s life inside out after he shoots at Sagesse’s friends outside his hotel, has political opinions that many consider to be despicable—in particular, that the issues in France are because “Arabs, Africans, the English-speakers, all of them–assailed [French culture] on all sides”—and that most people find the history of the pieds-noirs to be “ghastly, an insidious pollutant in the aquarium of French honor . . . France’s error made flesh . . . guilty simply for existing,” not unlike the shame the French feel in acknowledging collaborations with the Nazis in Vichy France. France didn’t want to acknowledge that Sagesse’s family existed; it would have been more convenient, she thinks, had families like hers “been gloriously martyred in Algiers.”

Sagesse opens the novel by saying that she isn’t American by default but by choice, implying, as we later learn, that embracing her American identity is a process of leaving the mess of her pied-noir legacy behind. In saying that the United States was the only place where she felt like she could breathe, she suggests that it could be for many a safe harbor where problematic histories have been left behind—but for her, as for many, getting to that safe harbor is a process. Sagesse makes sense of her story by heavily identifying with her father, who was the last living member of her family who had lived in Algiers, leaving at the height of the Algerian War in June of 1962.

Alexandre LaBasse left Algiers under duress, having refused to leave a year earlier with his parents and sister. He and his grandmother were the only family members left in the country; they clung to the routine of the twice daily visits of the doctor who attended to Alexandre’s his grandmother, of his parents’ biweekly phone calls, and of Alexandre’s own afternoon walks. But at night, Alexandre couldn’t pretend all was well, listening to the silence, imagining the “attack[ing] and pillag[ing], flashing knives and walls of flame”—images that would eventually reappear in his PTSD-induced dreams in the months after his arrival in France. Eventually, after his grandmother’s death, he leaves, packing his grandparents’ wedding photo, three silver coffee spoons, socks, a cushion cover needlepointed by his grandmother, and a small framed watercolor of the Bay of Algiers that Sagesse later takes with her when she moves to the United States—“a light-filled, buoyant picture painted early in the century, in happier times, a tableau in which the water winked in the foreground, the city’s residents strolled the seafront and, up the hillside, the buildings gleamed, pristine, unmarred by dust or blood.”

Dutifully, Alexandre had found a coffin so he could bring his grandmother’s body to France, and manages to get passage on the last ship going out. But in trying to bring his grandmother onboard, the coffin won’t fit. She is launched into the sea; the black coffin “slipped, with muted splash, into the oily Mediterranean” with everyone watching onboard, “this reminder of the dead they left behind, and their own deaths to come, and the glinting white glory of their city, lost to them like Atlantis, wavering there on the hillside, so near, but gone forever.”

Reunited with his family in France, Alexandre falls into a depression that no one seems to understand and then attempts suicide. He then becomes almost a version of the self that had left Algiers, but without the same vibrancy that he had once had. This continues throughout his life, which ends when Sagesse is 16, not standing against suicide’s “siren call” like St. Augustine and Albert Camus, but singing along. She quotes Augustine in saying, “By pining, we are already there, we have already cast our hope, like an anchor, on that coast. I sing of somewhere else, not of here: for I sing with my heart, not my flesh,” and in doing so recognizes how her father’s unacknowledged pain was what lead to his death.

After her father’s death, the Algiers familiar to Sagesse’s family no longer exists. It is “an imaginary city, a paradise conjured of words and partial recollections, a place that never, on the map, existed.”

In choosing to leave France rather than waiting until she is forced to leave, Sagesse is breaking her family’s circle of history. She says, “We move the pieces when movement is possible, because possibility and necessity, on some plane, are one; because what is fated and what will be are inescapably the same, and illusion is our only choice, choice our illusion.” To leave when she has a choice is to choose the future, Sagesse suggests. To enter the unknown is a kind of death, which is in its way a rebirth.