Home
»
Uncategorized
»
The Color Master: An Interview with Aimee Bender 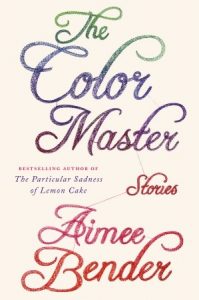 Certain stories never leave you. When I was six years old, I read such a story in Alvin Schwartz’s In a Dark, Dark Room and Other Scary Stories: “The Green Ribbon.” In it, a young girl named Jenny wears a green ribbon around her neck and never takes it off. When her beloved asks, she says her green ribbon is a secret. Even after they marry, she refuses to give him a reason for wearing it. Finally, on her deathbed, she tells him to untie it—he does, and her head falls off.

In Aimee Bender’s new collection, The Color Master, she twists this childhood urban legend into “The Red Ribbon,” the story of a woman who begins charging her husband for sex and becomes infatuated with a shop girl who wears a red ribbon around her neck. Though no one’s head falls off, the influence is clear—both stories are ultimately about the secrets we keep from those we love.

This is Bender’s particular talent—teasing out the human elements from the mythical, and refashioning these tales into something we can all relate to. In “The Devourings,” a human woman who marries an ogre must deal with the ethical, physical, and emotional consequences of her decision when her husband mistakenly eats their six children. In the eponymous story, “The Color Master,” a young woman hones her craft of dressmaking by learning how to fit emotion into garments—and in the process, saves a princess from marrying her father.

But it’s the very human interactions between characters that make this collection sing. In the stories  “Bad Return,” “The Fake Nazi,” and “The Doctor and the Rabbi,” characters find a particular kind of comfort in the hearts of strangers. In “Faces,” a young boy’s mother tries to reconcile with her son’s inability to recognize faces, while “On a Saturday Afternoon” features a young woman orchestrating a sexual encounter between two of her straight male friends.

Like “The Green Ribbon,” Bender’s stories stick with you. They are imbued with magic; colored by the echoes of tales you’ve heard somewhere before. Ultimately, though, they are brought to life by the kinds of emotions that make us human—self-doubt, envy, desire, curiosity, and hope.

Aimee was kind enough to answer a few of my questions about the collection:

Ploughshares: Many of your stories contain classic fairy tale elements. In “The Devourings” a human marries an ogre with tragic consequences. But in your stories, these human and mythological elements create a real harmony. What about the mythical attracts you?  What do you think fairy tales say about our modern lives?

Aimee Bender: It’s hard for me to even answer—my attraction to the mythical feels so primal and basic and I think I like everything about it. The imagery—the bold choices in storytelling. The quickness of storytelling, as Calvino discusses in his essay of that title. The way metaphor creeps in but is secondary to story so it doesn’t feel heavy-handed. The necessariness of these tales which seem to show up in every culture.

I subscribe to the Bettelheim belief, which is that the tales give us a way to grow up, a way to see the world through a lens that helps us learn how to be a person. I teach a course on fairy tales so the two retellings here, “The Color Master” and “The Devourings”, probably came from repeated readings of tales I love for that class. (“Donkeyskin” and “Molly Whuppie” being those tales.)

PS: There seems to be a very real sartorial theme with this collection. “The Color Master,” “The Red Ribbon,” “Bad Return,” and “The Fake Nazi” all contain a clothing item or accessory that holds special power for the wearer, either purely emotional or magical. What about jewelry and clothing inspires you?

AB: Good point! I guess I’m just drawn to clothing at the moment.  Feeling drawn to colors and textures, maybe? Mary Gaitskill talks about clothing so well (and deeply) in her novel Veronica—and about the kind of outfit of an era that feels neutral but with a little time suddenly seems so dated. I remember how reading that book felt empowering, because she took something so surface, in clothing, and plowed deeply into it for meaning.

PS: In your stories “Lemonade,” “Faces,” and “Americca,” you capture, for lack of a better word, the angst of being an adolescent outsider so well. In some ways, these stories stand apart from your others in their innocence and sense of hope. What about this age draws you to write about it?

AB: I find teenagers always fascinating and I felt fairly absent in my adolescence which is probably why I keep feeling drawn to it. It was difficult in that I just had no sense of being there at all—was a bit spacey and floaty and unsure what I liked or wanted to do. There were many feelings I didn’t feel and maybe that’s why I want to look at them now.

Also, adolescence is a time of extremes, and I do think we carry some of those same elements into adulthood, just more processed, more subtle.  So adolescence is a way to talk about those things in their most stark and vulnerable form. (Which relates to the sex question next, actually.)

PS: Sex is a recurring element in your work, but it’s often a type of sex that could be considered deviant in some way. In this collection, “Saturday Afternoon” deals with a young woman convincing her two male friends to have sex with each other; in “Bad Return” the narrator is a witness to a massive orgy; and in “The Red Ribbon,” the narrator finds she needs her husband to pay her for sex. Have you encountered any resistance or narrow-minded interpretations of these types of “deviant behaviors” as a result of these stories? Do you think writing about sex helps create a more open and honest dialogue?

AB: I haven’t encountered much resistance, though occasionally an Amazon reviewer will take offense. Mainly, I think my impulse to write about sex this way is the same impulse that leads me to magic in storytelling (and adolescence!)—all these elements push something so that it’s overt, on the surface, and therefore more tangible and easier for me to explore.

In the liner notes of a PJ Harvey album, she has a picture of herself holding up a sign that says something like “Don’t Be Subtle.” (It might actually be “Fuck Subtlety” but I’m not sure.) I liked that. Of course her music is totally subtle in other ways, but I like the idea that making something un-subtle in certain strong surface choices means the issues might be made more clear. So ‘regular’ sex wouldn’t provide that—it would be too nuanced!

The Color Master is available in hardcover, eBook, and audiobook from Doubleday.