Home
»
Reading
»
The Comfort of Writing Guides: On Benjamin Percy’s “Thrill Me” 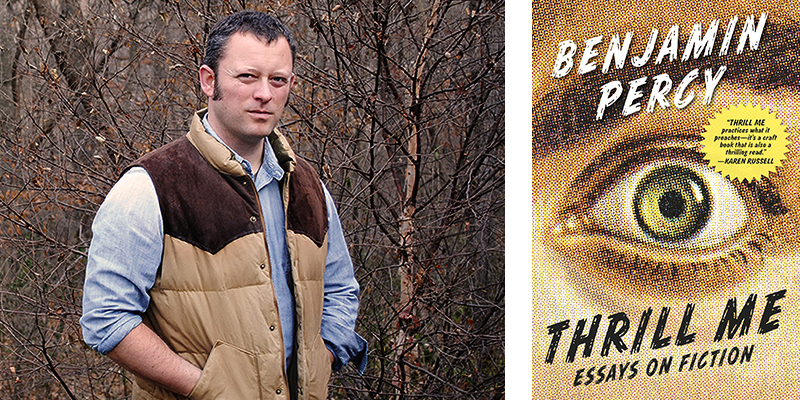 About a year ago, I heard Benjamin Percy give a craft lecture in Seattle. The talk, “Making the Extraordinary Ordinary,” concerned blending literary and genre fiction. The best cross-genre work, Percy argued, tempered its more out-there genre elements with deep characterization and an eye for detail. Percy—ever the comic book aficionado—spoke of his childhood disappointment with Tim Burton’s Batman film, and compared it to Stephen King’s novel The Gunslinger:

The world King created—a postapocalyptic world, a sorcerous world—enchanted me, but it was Roland who ultimately moved me, transformed me. The story had heart… Roland was the reason King was writing a novel, whereas Gotham was the reason Tim Burton was making a movie, which resulted in something heartless: all style, no substance.

Percy invoked the careful cross-genre blending of George Saunders, Kelly Link, and Téa Obreht, and ended with a call to genre writers to remember that “the normal stuff is necessary” in order for a reader to believe.

I enjoyed the talk, and was surprised the next day to read a take-down of it in the Seattle Review of Books. Paul Constant, a Seattle literary critic, wrote “last night’s… lecture by Benjamin Percy at Hugo House had all the familiar cooing cadence of how-to-write books, but Percy did not manage to deliver one original thought in his entire 45-minute talk. All he offered were writing-guide clichés, polished and lined up for presentation.” And a writer writing clichés is a writer who isn’t doing his job. “When a writer discussing the craft of writing relies on cliché to make his argument, his audience should treat everything he advises with great suspicion.”

Constant was right. Percy hadn’t said anything new—he had only said something old in his own way. Constant’s review didn’t diminish my enjoyment of the talk, but it informed my reading of Percy’s recently released essay collection Thrill Me, of which “Making the Extraordinary Ordinary” is a chapter. Thrill Me is a book on craft that draws examples from sources as wide-ranging as Cormac McCarthy and Jaws to explore the boundaries between literary and genre fiction. Percy weaves in dozens of anecdotes from his own life—student writing, family stories, a memorable sketch of his father-in-law—and while readers of craft books will find some of the essays a little familiar, Percy talks about modulations in tone and writing about work in ways that felt fresh and new to me.

Thrill Me isn’t aiming for the exaltation of John Gardner’s The Art of Fiction or the autobiographical sweep of Stephen King’s On Writing—two craft books Constant praises in his review. It’s too down to earth, too pleasantly wrapped up in its own examples and anecdotes. As Constant wrote of Percy’s talk, “after a certain point, all the tips and tricks and affirming quotations blend together into a whirl of positivity.”

But is that really so bad? Writing is hard, and a whirl of positivity can be the updraft an aspiring fiction writer needs to reach new heights. A good-but-not-groundbreaking craft book is a cheerleader, an encouraging letter from a friend. It doesn’t have to flip your understanding of writing on its head in order for it be successful; it just has to reassure you that you’re not the first person to face these particular problems. If it’s not new—well, few craft questions in prose-writing are. In the end, I was happy to have Benjamin Percy in my corner, with his gruff criticism of “feckless pondering” and his exhortation to find the image that resonates, to make it real. Percy, along with Stephen King and Anne Lamott and John Gardner, now has a spot on my personal cheer squad.