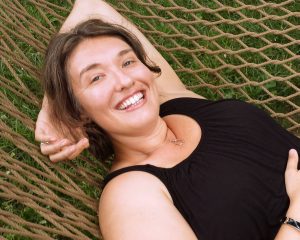 Catechism: A Love Story is not a romantic tale. It’s the story of the bride who ran away and the future bride who helped her. Author Julie Marie Wade, Lambda Literary Award winner for her memoir Without: Poems, doesn’t romanticize about finding love in this book-length lyric essay. She navigates its angles and curves, armed with a range of hybrid techniques that blur the lines between poetry, prose, and the three-act play, to go back to her pubescent times. All the way back, clamoring through romantic/sexual memories and the childhood formation of gender expectations.

The book’s essayistic elements come to play as Wade attempts to suss out how to live a romantic life. It leads her beyond the fantasyland of being in love with love and into new territory when a female friend helps Wade escape her elopement. Soon enough the two women are living together. They begin traveling the country together, visiting friends, family, determining which geographic location is most conducive to their lesbian relationship. It is not a tale of woe, not a tale of self-pity, not a tale of anger. Instead, this traveling is a lovely metaphor, and grants great rhythm to Wade’s piloting through her new life outside the tired traditions handed down by her parents.

“‘So, are you planning to tell your parents?’ A. asked. This was the return trip now, our venture out of anonymity and into a world of recognition.”

Throughout the journey, as obviated by the book’s title, Catholicism weaves through the book to commence a literary braid. Another strand includes frequent mentions of and inclusions of Wade’s idols, Adrienne Rich and Naomi Shihab Nye. Another strand contains mathematical attempts to resolve issues that she didn’t opt for the traditional route, a technique which sometimes works well.

Where does the sufficiency meet necessity?

The use of calculus, trig, and geometry could be understood for its proofs and arguments, but the level and frequency with which it’s used here threatens to alienate a group not particularly known for its mathematical skills. Could it be that a dislike for logic is a metaphor for the narrator’s dislike of trying to find logic instead of enjoying herself and her new wife?

It’s a tale of discovering one’s sexuality, accepting it, and getting comfortable within it—and within marriage. One of the most emotionally riveting parts of this lyrical memoir is the working out of how Wade herself feels about recognizing she is a lesbian and how she cowers behind hetero-normative roles rather than self-expression, which her friend/fiancé/wife A. (as well as the before-mentioned writers) finally help deliver her to.

A case in point is when the narrator is talking on the phone with her mother. “‘A. is going to live here. A. does live here,’ I declare. I want to make it a declaration and not a confession. I want to continue to stand in the light.

‘But there’s only one bedroom.’

‘And there’s only one bed.’

In that simple, declarative conversation the reader can’t help but move from sympathy (or perhaps empathy) and into rooting on the narrator.

Lesbianism and self-development are repeat topics in Wade’s prolific work. Her opus includes Wishbone: A Memoir in Fractures; Small Fires: Essays; chapbooks, and (lately) a number of collaborative prose poems/braided stories in Fourth Genre and elsewhere with Denise Duhamel, who, like Wade, teaches at Florida International University. She is a master of exploratory (AKA hybrid) nonfiction. A little poetic verse here and there, some fictional elements, essayistic searching, dramatic structure, and memoir, of course. She forges ahead not with aggression, certainly not with arrogance, and never with feeblemindedness. There are few lyric writers as gifted or literarily courageous. Wade is the thinking writer’s writer, a writer for all thinking women, and a writer for those who dare to dance through the fractures and symphonies of self-discovery.

Noctuary Press, headed by Kristina Marie Darling, seems a stellar fit for this Wade title. Noctuary “strives to open up a dialogue,” says Darling, “about what constitutes a literary genre” and even the politics of defining, labeling, and categorizing genres. The press also focuses on female writers. Furthermore, the font and formatting are especially classy touches, paying homage to early 20th century book formatting from the likes of say, Penguin Classics. Read a Seneca Review essay here that found its way into Catechism.