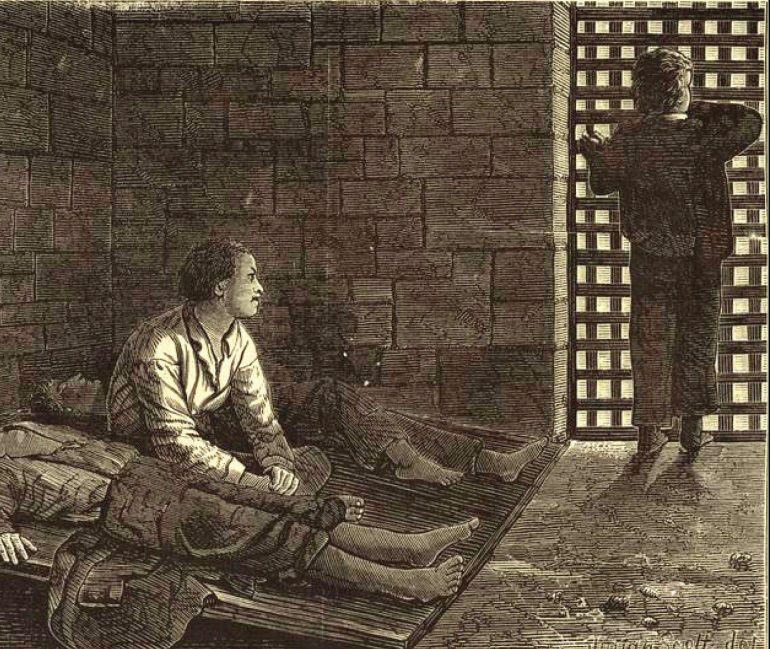 Discovered in 2009 at an estate sale and published for the first time in 2016, Austin Reed’s 1858 The Life and the Adventures of a Haunted Convict—the first known prison memoir written by an African American—presents a multitude of seemingly paradoxical claims and opinions. The book evades generic stability, blending memoir with picaresque, bildungsroman, jeremiad, and others, and Reed’s fervid statements on morality continually seem in contradiction with each other. By subverting expectations, however, Reed reveals the injustice of the justice system and the perpetuation of a criminal cycle enforced by a racist state. Though it was written over 160 years ago, Reed’s work remains relevant even today. An analysis of how he builds his arguments leads the reader to question the universality of fiction and the criminal cycle in the United States.

Haunted Convict begins by destabilizing the reader’s expectations: the very first sentence introduces a “bright sun . . . shining into the window of my father cottage,” but swiftly revokes any positive connotations from this sunny setting—the same sentence concludes in death: “I was called . . . to come and take the last look of my dying father.” Through this preliminary contradiction, Reed establishes that common expectations and logical associations will not be upheld in the following pages. We encounter Rob, a young black boy who enters the New York prison system after attempting to seek revenge for wrongful punishment and indentured servitude. Though the trajectories of nearly all the supporting characters in Reed’s book suggest a theme of sinner taught to seek virtue, Rob never escapes the criminal cycle. By subverting the reader’s expectations in both genre and plot, Reed unearths the impossibility of social and moral elevation in a white-dominated society for the young black boy.

Accepted as a memoir by the book’s editor, Caleb Smith, Reed’s assumption of a separate name for his main character, Rob, adds a distance between author and subject reminiscent of fiction, while Reed’s obsession with novels—particularly crime novels—consistently pulls the reader into questioning just how to classify Haunted Convict. Reed pens two lengthy tirades against the glorification of crime in fiction novels, claiming that novels feed readers lies and that “novels are books that will bring many a young man to a gloomy cell.” He later adds that even “in the very brightest . . . of [a man’s] days he finds an empty cell in a state prison, all through the influence of reading Novels.” By once again denying any positive connotations of “the very brightest”—harkening back to his opening line—Reed implies that fiction’s glorification of crime has the same power to derail a young man’s life as a father’s death. Reed explicitly calls his own work’s genre into question in these tirades as he claims that stories within such novels are perceived by their readers as “the life and the adventures of some great man.” The direct reference to the title of his book confirms that Reed, by writing a memoir which depicts “the life and the adventures” of a boy who dreams of crime, may be intentionally blurring the line between memoir and fiction, allowing for an analysis of generic instability alongside that of his content.

Reed relies heavily on crime and punishment or moral elevation plots for nearly all his supporting characters, while he deviates from this predictability in Rob’s trajectory. Many of the stories embedded within his narrative depict people who sin, such as Thom King, Mr. Wellington, and Fanny Miller. Each of these characters receives punishment for their crimes, as Thom King dies after lying, Mr. Wellington falls severely ill when drunk, and Fanny is sent to prison for her prostitution. Rob’s own plot, however, strays from the predictability associated with Reed’s views on morality, suggesting that social context affects how the values of virtue and sin influence the life trajectory of a young black boy. Among all three of the aforementioned supporting characters, Reed is careful to point out a blackness either in spirit or in eyes, a body part often considered spiritual: Thom King has a “black spirit,” Mr. Wellington has “eyes all swelled up and black as ink,” and Fanny Miller has “eyes as black as indigo.” By associating vice with metaphysical blackness through his supporting characters, Reed challenges his reader to see the same association between criminality and black skin that white men force on Rob, which keeps his life trajectory rooted in crime and non-standard moral progression.

Haunted Convict seems to mirror a bildungsroman as it follows Rob in his struggle to find a place for himself in the world and evade the wrongful punishment that looms over him, beginning with his first imprisonment after seeking revenge for being whipped. Throughout this cycle of crime and punishment, Reed treats Rob’s crimes as decreasingly significant to the plot while giving increasing focus to their inevitability and ensuing punishment, building tension between the structure of his memoir and the reader’s expectation of a traditional bildungsroman in which the protagonist will eventually accept society’s moral code and thus be accepted in return. Reed’s protagonist, however, soon learns that such a trajectory is not possible for him, as we see Rob acknowledge the inevitability of crime in his life. After being offered a safe living place and promise of education, Rob claims that he “must now occupy the place of a dog and become the villain of cruelty and the scoundrel of vice and crime,” a statement that seems like a leap of logic after just entering such a promising household. Later, as Rob finds himself in a position of safety “under the roof of [his] mother’s cottage,” he instead thinks of the inevitability of his criminal future by “preparing [himself] one day . . . to be a harden convict . . . where [he] must be loaded down with shackles.” Each time Rob enters a physical space of safety from the criminal cycle, he himself predicts that he “must” re-enter it, rendering crime in his society an unbeatable force for the young black boy. After Rob pursues the vice he predicts for himself, the reader sees that crime, rather than virtue, brings Rob into spaces he would not otherwise have access to, such as when

being well dressed and clean about [his] apparel, and with one hundred and sixty dollars in [his] trunk which [he] had made . . . by gambling with the common sailors . . . [he] was allowed to put up there with them and to take [his] regular meals at the second table.

By partaking in vice—gambling with the sailors—Rob eats at a higher table than where he would normally be permitted due to the color of his skin, indicating that crime for the young black boy is often the only path to survival. Through this inversion of traditional moral progression, Reed’s memoir can perhaps be read as an anti-bildungsroman.

In keeping with the decreasing significance of crime in the book, Reed does not give any page space or description to Rob’s final crime. Instead, the reader learns that Rob “returned Home and committed a crime which brought [him] back to a gloomy prison.” By omitting any detail about the crime, Reed asserts that Rob is unable to escape criminality due to the restrictions and assumptions society places on him, that his crimes are no longer relevant to the plot because they have become inevitable, and that the only significant aspect of Rob’s criminal cycle is the ensuing punishment. Reed implies that the punishments Rob endures perpetuate his cycle of crime, as his only options are to submit to wrongful and inhumane imprisonment and punishment, or to resort to immoral and criminal methods of subsistence to evade said imprisonment and punishment.

Towards the end of the book, Reed undertakes a long, jeremiad-like exposé of the justice system in New York, revealing the root cause of his criminal inevitability: that the state forces black people into criminal roles in order to uphold its racist conceptions of behavior. While the officers in the prison believe other inmates are responsible for egging on Rob’s criminal behavior, Reed informs the reader that the exact opposite is true. He claims “it was those hard hearted officers that had made [Rob] hard and cruel . . . preparing [him] for higher crimes and making [him] to become the fit subject of the gallows.” To name only a few of their wrongdoings, the officers break the rules they create for the inmates, threaten Rob at gunpoint for refusing to show remorse even after he takes his punishment, whip the inmates so extensively that some “expired a few days after,” and more. Reed also points out an unsurprising double standard, as “black hearted law breakers,” or whites who commit crimes, were “allowed to go unpunished,” while Rob “for one small crime was to become a dog, a fugitive and a vagabond, and the inmate of a dark and gloomy prison.” To further emphasize just who is responsible, Reed consistently specifies the “state prison” rather than just “the prison,” as well as the “New York House of Refuge,” or simply “New York,” throughout this latter portion of the book, invoking the state’s lack of accountability in its justice system.

By exposing the racist state’s responsibility in perpetuating the criminal cycle, Reed ultimately argues that the prejudice and hypocrisy of the racist and inhumane state perpetuate the criminal cycle for young black boys and prevent them from pursuing either moral change or social elevation. Pairing this argument with his tirades against the glorification of crime fiction and the novel’s ability to land young boys in prison, the reader can finally understand the paradox of Reed’s own genre. By writing a memoir in the form of an anti-bildungsroman that depicts “the life and the adventures” of a boy dreaming of crime while simultaneously railing against novels with the same content, Reed offers his own life as a direct counter to both the moral progression in the bildungsroman that is unattainable for black people as well as the misplaced agency given to the protagonists in crime novels. For the young black boy in an antebellum North, the state plays the largest role in enforcing a criminal cycle—a truth that we can unfortunately still find in our society now, over 160 years later.

Tags:Austin Reed, The Life and the Adventures of a Haunted Convict