Home
»
Uncategorized
»
The Culture of Fire 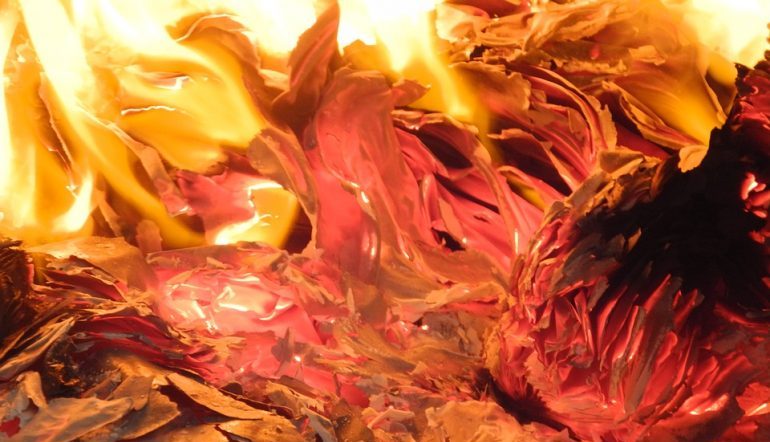 Welcome to another fiction writer, Carol Keeley, who will post every Friday. As always, thanks for reading, and we welcome any and all comments these guest blogs provoke.

Young women of a certain temperament tend to have a Frida Kahlo period. Mine bloomed post-Plath, pre-Rilke. I was bewitched by the fever of colors, her mythic suffering–skewered by a steel handrail, then thirty-two operations, mostly spinal, many botched, a crushed foot and leg, finally amputated–the eyebrows Diego Rivera described as “the wings of a blackbird,” and the unflinching self-portraits. But what gripped me most was the moment her body was fed to the furnace.

Sick of years spent in bed, often wearing plaster corsets, Frida dreaded burial more than death, so she planned to be cremated. Friends crowded the primitive crematorium as Rivera helped lift her body from the coffin and laid it on a cart. It rolled along iron tracks toward the crematory oven as mourners sang. Then the oven door roared open and heat blasted everyone against a back wall, shoved Frida into sitting, her hair a blazing halo. One witness said she seemed to wear a wry smile, framed in a crackling sunflower. The singing continued through the four hours she spent in the oven. Her ashes emerged as a delicate skeleton, which Rivera sketched just as a puff of wind erased it.

The last words in her diary were, “I hope the exit is joyful–and I hope I never come back–Frida.”

Long after I stopped observing any other remnant of Catholicism, I still found myself at Mass every Ash Wednesday. I believe in penitence–my favorite Jewish holiday is Yom Kippur–but that wasn’t what compelled me. It was the stark lyricism of kneeling as the priest wet his thumb, jammed it into a bowl of burnt palms, then intoned, “Remember that thou are dust and unto dust thou shalt return,” as the ashes chuffed against my forehead. Some particles so large, they scratched, others so fine, they powdered my cheeks as the smudged cross formed. It was very tactile, both coarse and tender.

Not long ago, while researching cremation for a story, the facts became so metallic, dispassionate, I turned to Thomas Lynch. That there’s a poet named Thomas Lynch running a family funeral home in a small town seems consolation on its own. That he has an ancestral home in Ireland and once fell from a third-floor fire escape, then answered the concussion testing question “Who’s president?” by reciting Prufrock with sloppy joy is all somehow congruent. That he and one of his five brothers boarded a plane for Florida with a traveling kit of embalming supplies after their father’s last coronary, then prepared him for the trip home to join their buried mother, is pure solace. As is Lynch’s fluency in what comforts: great literature, harrowing wit, a nonetheless faith and love.

In an essay, he observes that the Western Church equates fire with damnation, whereas in the East, it’s a purifier “that unites us with our elements and origins.” Somewhere between Kahlo’s solar exit, Lynch’s insights, and the crunch of ash against a forehead, it began to seem odd that we don’t attend cremations.

I’m driving alone on rural Michigan roads, following the car that carries my mother in a cardboard coffin. The crematorium is in the countryside, a vault within a pristine garage that, from the road, looks like home to farming equipment. This oven is owned by a robust and gentle man named Lee Paschal. I repeat his name as we shake hands. An Indian family came years ago, Mr. Paschal tells me. It was the only other time mourners came for a cremation. They put their father’s body in the oven and the eldest son asked if he could run the controls, since it was his responsibility to light the funeral pyre. Then they said prayers and left. Mr. Paschal is clearly still moved by this.

It’s a gorgeous October dusk, warm enough to leave the garage door open, so he does. The box is stamped in green: Handle With Extreme Caution. One end is marked HEAD. The men shift it gracefully from the car to the oven’s mouth. On the box’s heart, I leave a kiss-print of lipstick and three white roses, hold the rosary and wooden Madonna that made the trip with her. Mr. Paschal brings me a folding chair draped in fake red fur, asks if I’d like a cup of coffee. I would. I’d seen a grimy coffee pot chugging away in their cluttered office, but Mr. Paschal dashes off to a nearby restaurant instead. “Their coffee’s much better,” he says shyly.

On the cinder block wall, a calendar features a 1968 Super Stock Dodge Dart being admired by people in shorts. Beneath the furnace controls, there’s a certificate with my mother’s name. Mr. Paschal hovers, lets me be silent, then leaves me alone. I drift between spent and serene. A nearly full moon rises behind me as I face the oven, holding the rosary and the notebook I used as a nurse’s log to track the morphine, her pulse, the emptied catheter, things murmured during night vigils, incandescent moments as this woman’s eight children encircled her, eased her dying.

A few hours pass. The bathroom off the wood-paneled office is purple. Even the water heater is globbed with purple paint. Someone has glued eyes to it and dubbed it Barry. It’s clear there are few women here. Such a pascal color. Churches are adorned with purple every Easter.

“Have you ever attended one of these before?” Mr. Paschal asks, then discreetly explains that he’s going to open the oven door and stir a bit. He’s not sure if I want to see that. I’m not sure either, so I stand back, but it’s so beautiful, I end up nearly beside him, asking questions as he rakes. There’s a glow with particles of gold, sinuous heat, floating snow. What’s left? I look for tangibles. The torso? Maybe a pelvis. As a big piece explodes, he says, “That’s the pillow.” Synthetics in the pillow take longest to burn. He seals the furnace, removes his industrial gloves, tells me about losing his first wife. She died in their bed, cancer. His father died in that home, as well.

Near the end, his son Luke joins us, bare-armed and goateed, with a few toppled teeth. Also robust and gentle, he works heartily alongside his father, a sweet team, and talks about how he’s saving for a trip to Europe. He and a buddy. The trip is planned around obscure, poetic pilgrimages. Clearly, they’d be treating my mother just as tenderly if I weren’t here. The moon is now overhead, the garage door still open, and it’s getting chilly. I appreciate the red fur of the chair and the kindness of these men. When the box first bumped into the oven, I felt the vibration of my mother’s presence there still. I’d found it hard to leave her after Mass. When it’s done, I bend over the ashes with them as they use a magnet to remove bits of metal–from her teeth, from one shattered ankle. The ash is lovely. It could be star dust or bone snow, particles of burnt palms or compost. But it is not my mother.

Dust to dust. Open pyres on the shores of the Ganges. It is an old Hindu rite for the eldest son to crack a parent’s skull with a bamboo stick to release the spirit. Then he lights the funeral pyre and walks away without a backward glance. The same stick is then used to stir the pyre until the end, when it is thrown into the flames. It’s said that the stick represents the ego, constructed identity. It is the infernal, eternal query, “Who am I?”, consumed by fire and released.

This is Carol’s first post for Get Behind the Plough.