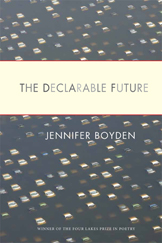 When I teach poetry, I often turn to Jennifer Boyden‘s work for startling images, masterfully paced tension and complicated, big subjects rendered accessible. The Declarable Future—Boyden’s second book of poems—not only showcases this signature voice I’d expected from it, but it moreover succeeds as a holistic, cohesive project.

With its connected themes, recurring characters and a hint of narrative arc in each of its four sections, The Declarable Future offers a vivid and disquieting vision. Here Boyden launches an inquiry into nothing less complex than humanity’s future, both as a species and for individuals existing in social structures. In the hands of a less skilled poet, the result might have ended up didactic, abstract or even predictable—but Boyden pulls the reader in and keeps her engrossed with every surprising turn.

The Declarable Future opens with a neighborhood, looking for disembodied voices. The voices “told us to buy clothes for ourselves,/ cover our bodies with lotion, find salvation.” These images prime the reader to expect a commentary on our advertising-saturated culture, but then with Boyden-like unpredictability, the poem heads to “one unbothered … neighbor/ who understood it was finally the angels speaking.”

Even though that one man is convinced he knows who the voices belong to, “the rest of us searched our houses,/ looked inside each vase, each cup, the boots, gutted/ our couches [convinced that the voices] … wanted to include us.” But the source of the voices is never found. So after having already entertained notions of commercials and angels and an insistent yearning, the reader is left with a sense of unease and a lack of resolution—a feeling that sets the tone for the rest of the book.

Boyden’s poems explore an impressive breadth of subject matter. She invites the reader into mythical realms of giants, and creation stories inhabited by gods; into natural and urban landscapes and indoor into homes; and even into the realms of science and technology. Images of loss and violence and environmental destruction are pervasive throughout many of the poems, some “Counting the Dead”, some declaring that “bleeding is code only for bleeding”.

But even when presenting the ugly, Boyden’s inventive details and rich imagery establish an honesty and tenderness that persistently seeks—and often achieves—moments of connection. It’s this tender, but sharp voice that gives dignity to suffering and ultimately makes this book so accessible and compelling.

It’s worth noting that Boyden’s first book, The Mouths of Grazing Things, also brims with her signature insight into great complexity. But while I’d normally be tempted to suggest that one book  is better than the other, in Boyden’s case that is not only impossible but beside the point. So I’ll more appropriately say that The Declarable Future expands a remarkable body of work—one I hope to see growing, delighting and chilling for years to come.

For now Kristina Kopić lives in the Boston area where she teaches college kids how to argue. She is also the curriculum coordinator for emersonWRITES.