Every morning, as part of my quarantine routine, I’ve read several pages of classic literature, both in English and Chinese. One day, in particular, I came upon these lines in The Odyssey, as translated by Stanley Lombardo:

A man who has been in the fields all day
With his wooden plow and wine-faced oxen
Longs for supper and welcomes the sunset
That sends him homeward with weary knees.
–– 13.32-35

They remind me of a poem in the Book of Songs, the oldest existing poetry collection in China. Its first stanza reads (translation mine): 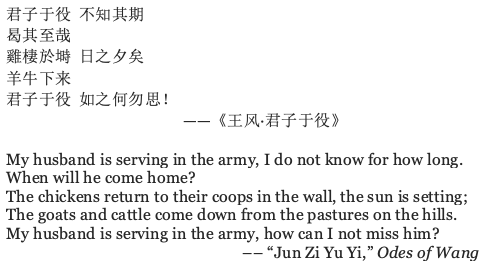 My Chinese ancestors painted this idyllic image more than two thousand years ago, though for many contemporary Chinese, it still illustrates the idea of a happy life: to live close to family members on a plot of ancestral land, labor during the day, and come home to loved ones at sundown.

Odysseus’s journey, also envisioned over two thousand years ago, is filled with heroic plots and supernatural phenomena. Yet his desire to return home for supper is nothing out of the ordinary. Even my semi-literate mother, who has lived her life in the land-locked mountain valleys of Southeast China, and who knows nothing about Odysseus, well understands the internal force driving the hero on his treacherous voyage. During my brief visits home over the years, she has often said to me: “Every day, when the sun goes down the mountains, I want to go home. It’s very strange that you like to live so far away. Don’t you miss home in the evening?” I fall into silence.

I left home when I was seventeen. I wandered to the north and then overseas for education and experience. For years, when the sun set, I ate alone. I swallowed dumplings at a small desk under my bunk bed in my university dorm in Wudaokou, and boiled instant noodles in a rooftop room I rented from a migrant New Yorker’s rent-controlled home. Slowly, home was blotted out as the future-gazing of immigrant life demanded my full attention. Now, America, disintegrated by a tiny virus, screeches to a halt, leaving me a small buoy on the open sea.

I’ve turned to history for illumination.

Ming dynasty essayist Zhang Dai (1597-1689) described the joy of my ancestors relishing homecoming stories at a time when seaward travel was rare and awe-inspiring. I also come from the mountains, and I have flown across the sea. When I return home, I need not introduce any exotic delicacies, as iPhones have reached deep into the villages. The newest iPhone models have even done away with their home button, allowing users to sail seamlessly on a silver screen. Yet my Identity 2.0’s transition back home has never been smooth. I left home searching for the new and intellectual, and in the end have found myself aching for the old and tangible. To my disappointment, the physical artifacts I look for in China are either destroyed or dilapidated, and my childhood memory cannot be digitized, thus can hardly hold attention. I come and go, skimming on a slimming surface.

Today, I am quarantined in a one-bedroom apartment in a hundred-year-old building in Atlanta. I’ve recently noticed that none of the walls are straight, straining to hold space and stories. One day, through a crack in the plaster wall, a possum squeezed in. It hopped on the dining table and gnawed on a pineapple. In a fluster, my husband lifted the possum’s long, pink tail and threw it out the window. It landed on the steps, stunned, then stood and swaggered away. Deeply shaken, I scrubbed every surface of our space.

I work from home and work out at home. I shop online and type in my mailing address or billing address, which may differ from my permanent address. In my thirty years on this earth, I have lived in six cities across two countries and will most likely change my home address again, and again.

In China, homeowners do not own their homes; when they purchase permanent property, it means they lease it from their country (typically for seventy years). As a little girl, my mother lived with her peasant family and slept on a silo cover under a leaky roof, the wooden crossbar cutting her small back. After she married and gave birth to three daughters––I was the last disappointment––she moved us to the city, opened a business, and found success. Over the years, she purchased several properties under her name: first a humble apartment in the hardware center, then an upscale one on the outskirts, and finally, in her words, an entire house 有天有地 including sky and earth. Still, she continues to search for a perfect home.

As my mother upgraded, I dreamed of leaving. Under the one-child policy, I was born illegal in my home country. For two decades, my parents dodged the hefty fine named social maintenance fees. I had misused China’s limited social resources, saved for the only child. I felt ashamed of my transgression. Twenty-three years after I was born, my parents finally paid off their mortgage of me––plus interest and taxes––so I could leave China debt-free.

By leaving my homeland, I demonstrated my freedom of choice and a quest for knowledge. Yet physical detachment only heightened my yearning for an emotional homecoming. In the decade since I first boarded an international plane to the United States, distance has lent me both a sharp lens and a soft gaze to examine my country of origin. I navigate the personal and political wilderness by learning and unlearning what I have been taught, trying on and taking off two largely incompatible languages. All the while, rifts between different peoples are widening, rupturing the ground of my unsteady reality.

Throughout his life, Song dynasty poet and politician Su Shi (1037-1101) was exiled time and again by political rivals, which sharpened his feeling of displacement and heightened his sensibility to the transient nature of life. Had the constant departures and arrivals blurred the edges of his personhood, memory, and home, like the thawing prints on the muddy snow? Or did a life on the road illuminate his purpose of travel, which infinitely closed the distance between him and his idea of home?

In ancient China, banishing one from his homeland, stripping his social ties, and threatening his identity from without constituted a punishment perhaps only second to––or worse than?––a death sentence, a sentiment shared in Shakespeare’s world.

‘Romeo is banished’––to speak that word
Is father, mother, Tybalt, Romeo, Juliet,
All slain, all dead: ‘Romeo is banished,’––
There is no end, no limit, measure, bound,
In that word’s death; no words can that woe
sound.––

There is no world without Verona walls,
But purgatory, torture, hell itself.
Hence-banished is banish’d from the world,
And world’s exile is death,––then banished
Is death mis-term’d: calling death banishment,
Thou cutt’st my head off with a golden axe,
And smil’st upon the stroke that murders me.

A life in exile was translated into a fate of death only when such unknown was imagined against the security of home and the sweetness of love. What if home is the source of instability and love, cruelty? Today, poverty, conflict, and persecution have displaced nearly eighty million people around the world. Twenty-six million refugees seek protection far away from their homes. Being granted asylum in a developed country not only signals basic security but also betrays a stamp of privilege––does it dull or sharpen one’s innermost yearning for home?

In China, young people like myself are fleeing a stifling political climate, darkening economic prospects, and a widening spiritual void––willingly banishing ourselves into the unknown. Truthfully, I have chosen to migrate only because I know the option to return home is available.

When I think of home after I close my eyes at night, I do not think of politics, but the rolling tea slopes wet under morning fog, a lush bamboo grove greening a monk’s sleeves; the steady toll of a distant temple bell, a pot of rice wine brewed with dew-drops from the leaves; a wooden boat rowing under ten miles of lotus flowers, ripples glistening like shredded feathers; a pair of orioles exchanging love songs through a spring willow, a line of white egrets soaring into the wild clouds. Landscape does not move or speak, and thus it does not disappear nor disappoint. It will always be there waiting for me, I tell myself.

I think of the local dialect and ancient poems still clinging to the air that once wetted my ancestors’ hair. My people speak like birds across rice fields and treetops, their words flying on wings. Some of the syllables preserve ancient Chinese utterances that have died out in northern Chinese languages, including Mandarin, the official language I learned in school. If Mandarin was a train ticket out of my hometown, English was a plane ticket out of China. While I feel proud to claim English as my work language in America, I am most comforted to be able to speak in the dialect my ancestors spoke eight hundred years ago, each syllable a wild crane calling me home.

As far as I know, my hometown has never been colonized by a foreign power. It has survived millennia of dynasty changes and seventy-one years of Communist rule. It endures domestic tyranny the way a mountain withstands earthquakes and absorbs foreign ideology the way a river receives rain. This steadiness, I feel, is my greatest privilege.

What is the native language of America? What does home mean to those without a voice or choice? When I imagine my home plundered, my history erased, and my native language extinguished, I wonder if my longing for home would turn as violent as the force that has destroyed my imagination of it. Homesickness has provided me a vital source of strength, allowing me to live in the undying history of my longing and belonging. To lose home or lose the ability to return home is perhaps the greatest bitterness Odysseus tasted, a risk my mother wisely avoids.

This piece was originally published on November 17, 2020.