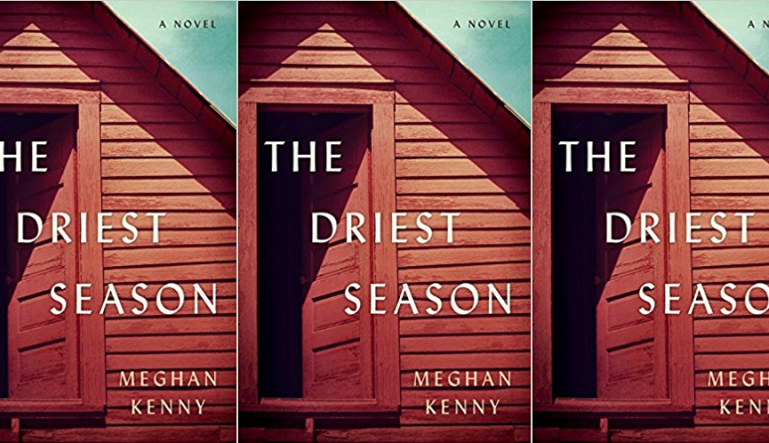 The Driest Season, Meghan Kenny’s debut novel, is compact and efficient, clocking in at just under two hundred pages. Borne out of a short story which won the Iowa Review Award, the novel takes place in Boaz, Wisconsin during six weeks in the summer of 1943. The story is told in a close third-person voice as we follow Cielle, a girl on the brink of turning sixteen. The prose is precise and strong, never overly lyrical or excessive, and it perfectly matches Cielle’s character and outlook on life. Kenny’s first book, Love is No Small Thing, which was published in 2017, is a story collection; here, too, her writing is concise and character-driven.

The brevity of the novel—in page count, not in depth—means that it’s easy to read in a weekend. Falling into this book and living completely in its world for a day or two may be just the right way to read it. The kind of reading experience that I equate with childhood, and with those first books I loved, works wonderfully here because the book unfurls in such a confined time and place. For two days, we can retreat to the Wisconsin summer during World War II and live there, with the characters, as their lives twist and turn.

And you may be forced to do this; the novel’s opening grabs the reader and doesn’t let her go. So often, novels that begin with an inciting, dramatic event mean that the novel will be exploring the good stuff: what led up to that event and then what follows. (Julie Buntin’s recent novel, Marlena, works similarly.) Here are the opening lines of this novel:

In that driest season, Cielle’s father hanged himself in the barn. A rope tied to a beam above stacked bales of hay, a wheelbarrow, rusted cans. Cielle found him. Home from summer school in the middle of July, and her legs couldn’t move beneath her. She looked and didn’t look. Her father hung still, bloated and blue.

Throughout the book, this is always the way Kenny operates: she walks right up to a situation, and forces her characters, and her readers, to live in these uncomfortable moments, to feel their weight. There were times when I cringed for the characters, when I “didn’t look,” wanting to alleviate the pressure, but it is this honesty and this willingness to confront that makes this novel so fresh and successful. The tension never wavers.

And that tautness makes such sense here because it mimics the way that Cielle behaves in the world. She is one of the most original female characters I’ve encountered in a long while. She is a strong girl who rarely backs down. She speaks her mind. She questions, she worries, she grieves, and we’re given access to her innermost thoughts. We’re with her as she tries to make sense of her father’s suicide and to understand her place in the world. Most critically, though, Cielle watches and observes. She makes sense of things through what she sees. In a flashback, she remembers the moment that her mother brought her to meet an Amish man at a market:

When they were close to him, only feet away, Cielle noticed the gray stitches that sewed his shirt together, like stitches in a wound. Like knowing what held a person together and kept them from falling apart. Wide, gray stitches in his navy blue shirt and suspenders.

Cielle is trying to understand what led to her father’s death, what it was that made him commit suicide. These slivers of comprehension get threaded into the narrative, Cielle noticing a small detail which seems to open up a space of understanding.

The novel is largely inhabited by strong women; even Cielle’s older sister, Helen, whom she disapproves of for her desire to marry and live a conventional life, is often straightforward and uncompromising. Cielle’s mother is especially well-drawn. When we first meet her, just after Cielle has found her father’s body, she is in the bathroom: “She found her mother in the claw-foot tub, lying still, looking at her feet in front of her; she did not bathe in the afternoon or during drought.” Seeing her only through Cielle’s eyes, we become frustrated with her inability to connect to Cielle, to provide comfort. But then, in the moment when it matters, we see that she, too, has an iron core.

The world of this novel is one where successes and failures are linked to the land and to the weather. Kenny describes the way in which these people are connected to this place by constantly showing us the land, the sky, the air. The dryness and the heat are palpable, and that weight adds to the grief and gloom:

The ground radiated heat. Dry grasses on the shoulder of the road crunched under her feet, and she became heated as she walked. She thought a dry piece of grass might be stuck in the back of her throat. The sun made the top of her hair almost too hot to touch.

The workmanlike nature of the prose beautifully echoes the land as well as the characters.

For much of the novel, one bad event follows another and, at first, it felt like too much. How much more can this family endure, I kept thinking. When will this girl get a break? But I came to understand that the book is about survival as much as it’s about grief and coming-of-age. What’s particularly wonderful here is how unsentimental this all is. Kenny is not interested in nostalgia, or in describing a world of the past where everything was simpler and, therefore, better. While this is a historical novel, it’s primarily a character study: the characters lie in relief against the backdrop of history.

This is a tough, unrelenting world, and Cielle is learning how to navigate it. By the end of the novel, we know she will not only survive but, with any luck, will go on to take over the world.