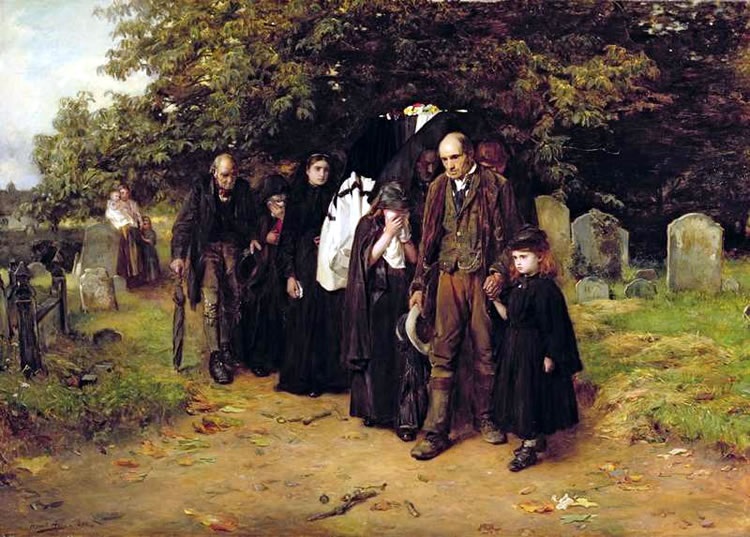 I am the Resurrection and the Life, or The Village Funeral, Frank Holl, 1872, Leeds City Art Gallery

Any funeral is poignant. But that’s particularly the case for those who die anonymously, unclaimed by friends or family. In the Netherlands, city poets have responded to the tragedy of “lonely funerals” by researching each deceased person and writing a tailored poem. The poems are short, stark, and moving speculations on identity and loss.

The lonely funerals phenomenon is especially moving as the Netherlands is a largely non-religious society: two-thirds of the population has no religious affiliation. Death would be sharpest for those who don’t believe in an afterlife, and the non-religious would have little reason to believe that dead souls could somehow be comforted by the words written to mark their lives. So the significance of this ritual, even more than other funeral practices, is for the living. It addresses our sense of the tragedy of someone dying unclaimed. It attempts to reassure us that no one can leave the world unremarked.

The lonely funeral poems were the brainchild of the delightfully named Bart FM Droog, the city poet for Groningen, in 2001. (The city poet designation came with an initial award of EUR 5,000 per year.) Droog’s idea soon spread to other Dutch cities, as well as to parts of Belgium. In Brussels, volunteers attend funerals that would otherwise be unattended.

There’s now a competition for the best lonely funeral poem written each year. The simple prize is funded by the arts research program The Art of Impact. The competition is named after and judged by Ger Fritz, a former employee of the Amsterdam Department of Funerals who has been central to the recognition of lonely funerals in the Dutch capital. The same year that Droog’s first poem was prepared for an anonymous deceased person in Groningen, Fritz began honoring the lonely dead in Amsterdam. He arranged a simple funeral service for each such person, with flowers, appropriate music, and pallbearers. He has attended more than five-hundred lonely funerals, often with poet Frank Starik, who incorporated the poetry aspect into Amsterdam’s funerals for the unidentified.

There have been over 210 such poems written in Amsterdam alone, where a dozen people might die unclaimed each year. They might be homeless, forgotten and elderly, undocumented migrants, victims of crime, or addicts. Their bodies might be found in canals or derelict houses.

These are reminders of the people a society lets down. A state-provided funeral and a poem may be gestures, however slight, toward addressing that neglect.

Originator Droog has referred to the poetry tributes as being a “social task of the poet.” He’s wondered whether his interest in mystery deaths stems from the fate of his uncle Niek, who was never found after his time in a concentration camp during World War II. “Each death has its own story,” he’s commented, and Niek’s has gone untold.

Starik also sees the role of narrative as important. As he told the Dutch radio service, “People are story machines. . . . What the Lonely Funeral does is return stories to people who have somehow lost theirs along the way.”

It’s not an easy task to construct (or reconstruct) these stories. The city authorities give the poets some details about the deceased, but given the sparseness of readily available information, sometimes the poets act as detectives, talking to neighbors, researching the areas the individual came from, and searching for information online if the person’s name is known. It’s not a lot to go on.

Farewell sir,
without papers, without identity. What were you looking for?
How much did you lose along the way?

Poet Hester Knibbe has reflected on the difficult task of speaking of a person in this way: “How do you write a poem about someone you don’t know anything about…? It’s like a word that just won’t come: you describe, you try to imagine a basic life, trying to force it into some highs and lows.” In the case of Lonely Funeral #6, Rotterdam, Knibbe ended up writing a poem acknowledging what wasn’t known, and speculating about the contours of an ordinary life.

This poem makes you wonder how much you can ever know about another person, even a friend. There’s an urge to fit their story into a familiar story template, like the biopics of famous musicians that all end up following the same narrative arc.

A bit more information is known about the man buried in Lonely Funeral #178, Amsterdam. Poet Jos Versteegen received a report about a twenty-five-year-old man named EZ, born in Bacau, Romania and found in a central Amsterdam hotel room. The cause of death was an overdose of amphetamines. There wasn’t much else in the room: clothes, a backpack full of condoms, and four phones. EZ had recently obtained a social security number and a sex worker’s license. He had a distinctive butterfly tattoo.

Versteegen’s poem has a haunting refrain of “E. of Bacau,” “E. from Bacau.” This seems like an attempt to fix the man geographically because other aspects of his identity are so slippery. For the foreign-born, this sense of geography becomes especially salient in the funeral details. One poet looked for Nigerian mourning music to play at a Nigerian immigrant’s funeral. Another reported that in Rotterdam, foreigners are buried at the top of a triple grave, in case their bodies need to be excavated later.

If the details on a police report become the last official record of a person, then it’s not surprising that EZ becomes, in the words of the poem, a “butterfly with an overdose”–or that the song chosen to commemorate him is R.E.M.’s “Everybody Hurts.” There’s little else to tell.

The 2016 winner of the Ger Fritz Prize was Menno Wigman, for his poem “Gestript gedicht” (Stripped poem):

And when the house is finished death arrives.
Those words, read long ago god knows where,
once haunted my thoughts for days,
I had moved, kept painting,
the work completed, death stayed away.

You too moved into a brand-new house.
The floors, people said, you left bare.
The walls remained unstripped.
Only the bedroom was used.
There you withdrew further into yourself.

The house remained unfinished. Even so the end came.
You were a human being. Lived unimpeded.
Who could have painted your walls?
Who could have given you words, warmth, light?
Thinly veiled shame. This stripped poem.

unofficial translation by Inga Buyse, with permission of The Lonely Funeral Foundation

In the announcement, Fritz noted the looming presence of death in the poem, even tied to the seemingly prosaic act of painting a house. The poem was prepared for GM (1942–2016), who was born in the Italian village of Polistena and died in an Amsterdam hospital. His house in Amsterdam was bare and apparently unused, except for one bedroom. No contacts could be found for him.

Image: I am the Resurrection and the Life, or The Village Funeral (Frank Holl, 1872)