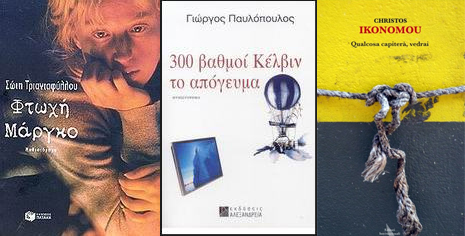 This interview is part 1 of a 2 part series on contemporary Greek letters and the economic crisis.

Literature survives. Always has, always will. Modern Greek letters alone have seen the rise and fall of the Ottoman Empire, two world wars, followed by the Greek civil war in the 1940’s along with its recovery period and its military junta soon thereafter. And most recently, it’s overseen six years of Economic crisis, which has seen Greece on the brink of exit from the Eurozone. No matter—the literature survives. And in that there’s not only hope but celebration.

Some would argue, because of the crisis, that Greek letters are more popular than ever before. I talk with Evangelia Avloniti of the Ersilia Literary Agency about just that: the economic crisis, the future of Greek letters, and the author she’s most excited about right now.

Daniel Peña: Your agency has done so well despite the circumstances. How does one, in the Greek book industry, survive amidst the Greek economic crisis?

EA: I believe that the first prerequisite to surviving and thriving in difficult times is to love what you do truly and passionately. The second is not to let fear paralyse you and to continue being creative and resourceful even when everything around you falls apart.

And to always look at the big picture. It is never just about you. As an agent, you are only a part of the chain and as such you need to think of others (the authors, the publishers, the readers, everyone) with compassion and respect, without, of course, compromising your standards. There were cases when I could have pushed for higher advances in the last five years but I knew that short-term benefits would be detrimental to the longevity of the fragile Greek market. Instead I chose to concentrate my efforts on careful ‘matchmaking’: that is selling books that will prove good investments for Greek publishers whilst keeping my foreign clients happy. Greek publishers cannot afford to make bad choices these days. The last five months following the January elections and the protracted loan negotiations have led to a serious liquidity crisis. Add to this the recent capital controls and extended bank holiday, the Greek book market is practically reeling. I can think of no other way to survive in these circumstances than to mobilize our business acumen, unwavering professionalism, compassion for others and true love for what we do.

DP: You mentioned Greek publishers simply cannot afford to make bad choices. Are you seeing any trends in Greek publishing right now? What does a good choice look like right now?

Good, risk-averse choices cannot guarantee success—success is too heavy a word when everything here revolves around survival—but they can guarantee fewer losses if the book does not fare well in terms of sales.

We tend to associate good, risk-averse titles with mediocrity or conservative, predictable choices, which—to me—is wrong. A good, risk-averse choice can be high-quality fiction or original thought-provoking nonfiction that does not cost a fortune to acquire, is right for a publisher’s list and manages to strike a chord with Greek readers. That’s where good matchmaking on the part of the agent comes in.

DP: One might say that the Greek publishing machine has found itself, in a way, in an enviable position. The U.S. economic crisis in 2008 pales in comparison to what is happening in Greece today, but I remember a certain segment of American millennials who, in a healthy economy wouldn’t have been writers, suddenly found themselves writing. There was this kind of, “why not?“-attitude—the stakes of everything were so low. Many millennials found themselves with no job and an ungodly amount of time. Do you feel like, in some ways, the Greek economic crisis has positively affected Greek letters? Is Greek fiction, in particular, getting more interesting because there are more writers with more subjectivities? Whose work are you most excited about right now?

EA: I’d say that the gold rush is definitely over in Greek publishing. Fewer and fewer first-time Greek authors are being published and even though Greek fiction is on a rise due to a marked decrease in foreign fiction titles, total title production has gone down significantly in recent years. Publishers are becoming increasingly reluctant to invest in new names but—bad as this may be for unknown writers—it has definitely led to more selective and better-curated publishing. In a way the economic crisis has helped underscore the publishers’ authority as curators and gate-keepers and has helped bring forward the new voices that truly matter.

Judging from the subject matter in so many high quality fiction titles of the last five years, the economic crisis has affected writers’ sensibilities in a profound way. And yes, Greek fiction has become more interesting, urgent, deep, humanistic, and universal than it’s ever been in the last twenty years because of that.

Thankfully, the Greek reading public has embraced these books warmly, which has not only benefited sales but also the Greek collective psyche. To paraphrase the Italian theatre director and artist, Romeo Castelluci, I believe deeply in the role of the reader at this very crucial juncture. To be a reader today is a political act of prime importance.

DP: Whose work are you most excited about right now?

EA: In my view, the most brilliant voice to have come out of Greece in the last five years is short story writer Christos Ikonomou. Described by Italy’s La Repubblica as “the Greek Faulkner,” Ikonomou writes with profound sensibility, deep humanism and astute foresight about the human condition using the Greek economic crisis as a backdrop. His short story collection, Something Will Happen You’ll See (Polis Editions, 2010)—a wrenching yet optimistic elegy to Greece’s working classes—was the most reviewed Greek book of 2010 and the recipient of the prestigious Best Short-Story Collection State Award. It has been translated into six languages and is being published in the U.S by Archipelago in 2016. His new collection of novella-like stories titled, All Good Things Will Come From The Sea (Polis Editions, 2104), the first title in a planned trilogy about the civil-war-like effects the economic crisis has on a nondescript island in the Aegean, is a powerful and deeply-affecting book which has received great reviews and has already been sold to Italy and France.

DP: Thanks, once again. This was super fascinating.