Home
»
Uncategorized
»
The Ecstasy of Influence 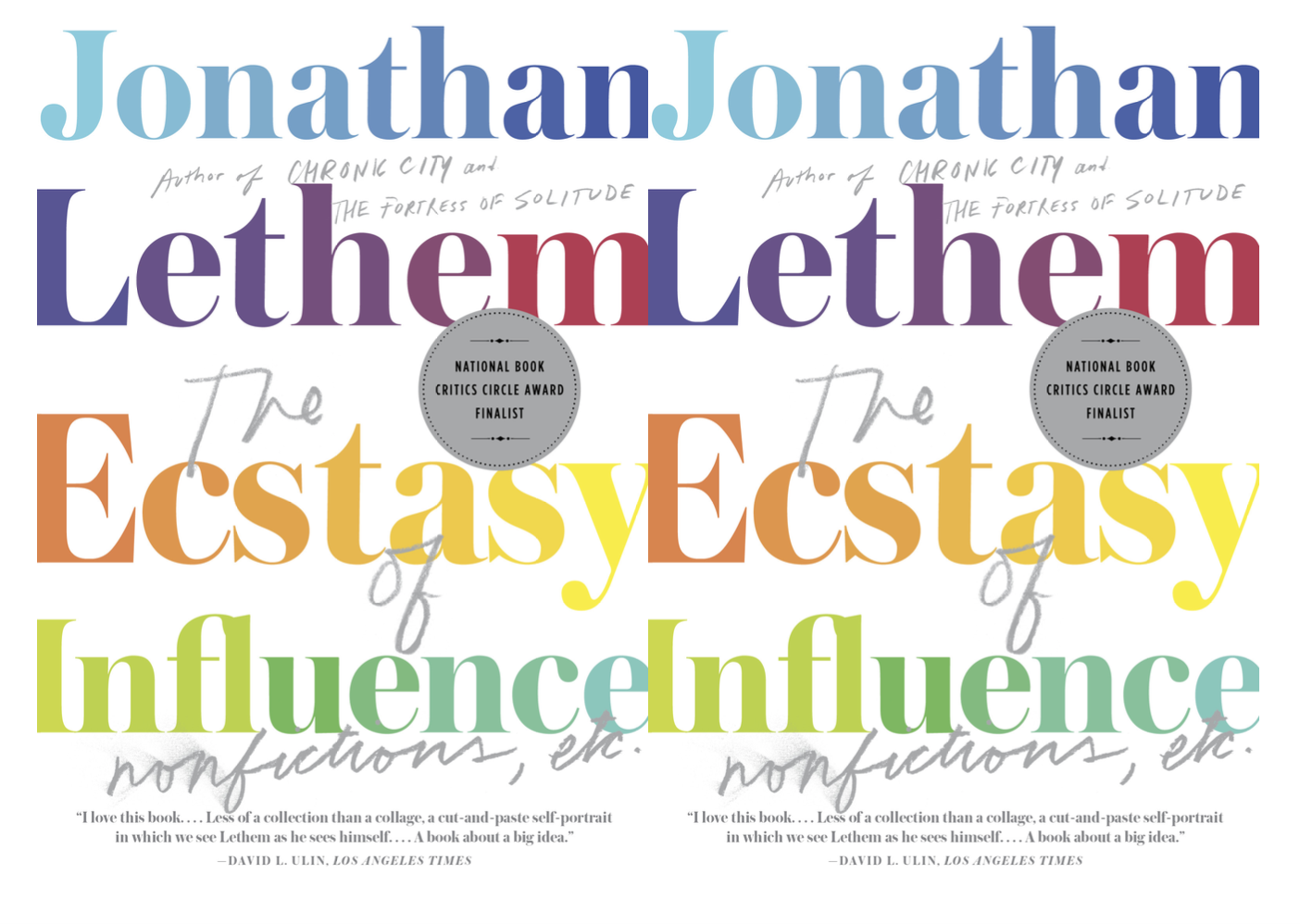 Have you ever found, after a long trip with a friend, that you’ve grown tired of their voice? That approximates how I felt after reading Jonathan Lethem’s most recent collection of prose, The Ecstasy of Influence: Nonfictions, Etc. Not that I didn’t enjoy the book—there’s a lot to like in its 437 pages of essays, short fiction pieces, and criticism, some previously published and some not, comprising a colorful range of subjects in an eclectic mix of what Lethem calls “White Elephant Writing (big, ungainly, awards-season stuff)” and “Termite Art (prestige-immune routes of curiosity through the cultural woodwork).” But the collection spirals from one to the other, and it’s sometimes trying to keep up with Lethem as he waxes philosophical, quirky, poetic, and back to philosophical again.

Examining the cultural woodwork is something Lethem is known for, so perhaps unsurprisingly it was the “termite art” I was more drawn to here. (Some of my favorites were “Top Five Depressed Superheroes,” “The Drew Barrymore Stories,” “The Used Bookshop Stories,” and “The Mad Brooklynite.”) Lethem’s world is built atop a foundation of his likes and interests: comics, Brooklyn, science fiction, obscure rock music, and even more obscure writers and thinkers—and though I don’t personally share many of his particular passions, I appreciate being privy to his thoughts.

On the other hand, the book’s title essay is definitely a piece of white elephant writing, and it’s also among my favorites. Lethem argues the validity of borrowing existing art to create new art in a provocative yet maddening piece that we believe to be Lethem’s own writing, until we arrive at the end to find that it’s entirely plagiarized from a clever blend of sources. It’s an impressive feat that serves as a testament to Lethem’s innovation and creativity, but also his reverence for the existing literary and artistic canon (and perhaps more importantly, that canon’s outliers).

However, where Lethem really shines is a more poignant section, titled “9/11 and Book Tour,” in which he recalls what it was like to grapple with the events of 9/11 as a writer living in Brooklyn, walking back and forth between his apartment and the Brooklyn Bridge promenade—staring across the river to Manhattan’s scarred skyline. (Lethem grew up in Brooklyn, but now lives in Claremont, California, where he’s taken over David Foster Wallace’s appointment as the Roy Disney Professor of Creative Writing at Pomona College.) It’s writing like this that reminds us of Lethem’s ability to evoke the importance of place, of our position in time and culture, and it’s a solid blend of termite and white elephant. Lethem, the self-proclaimed “Lorax of Brooklyn,” says he “misses Brooklyn a lot… I dream my way back in my writing.” In that dreaming comes his strongest writing.

Ecstasy of Influence is a collection steeped in nostalgia, for certain places and certain times and certain artists, but it’s also smart, witty, and moving. It may be too much to digest in one sitting without growing tired of the author, but it’s worth savoring in parts, hopping from piece to piece—as Lethem himself would probably want.