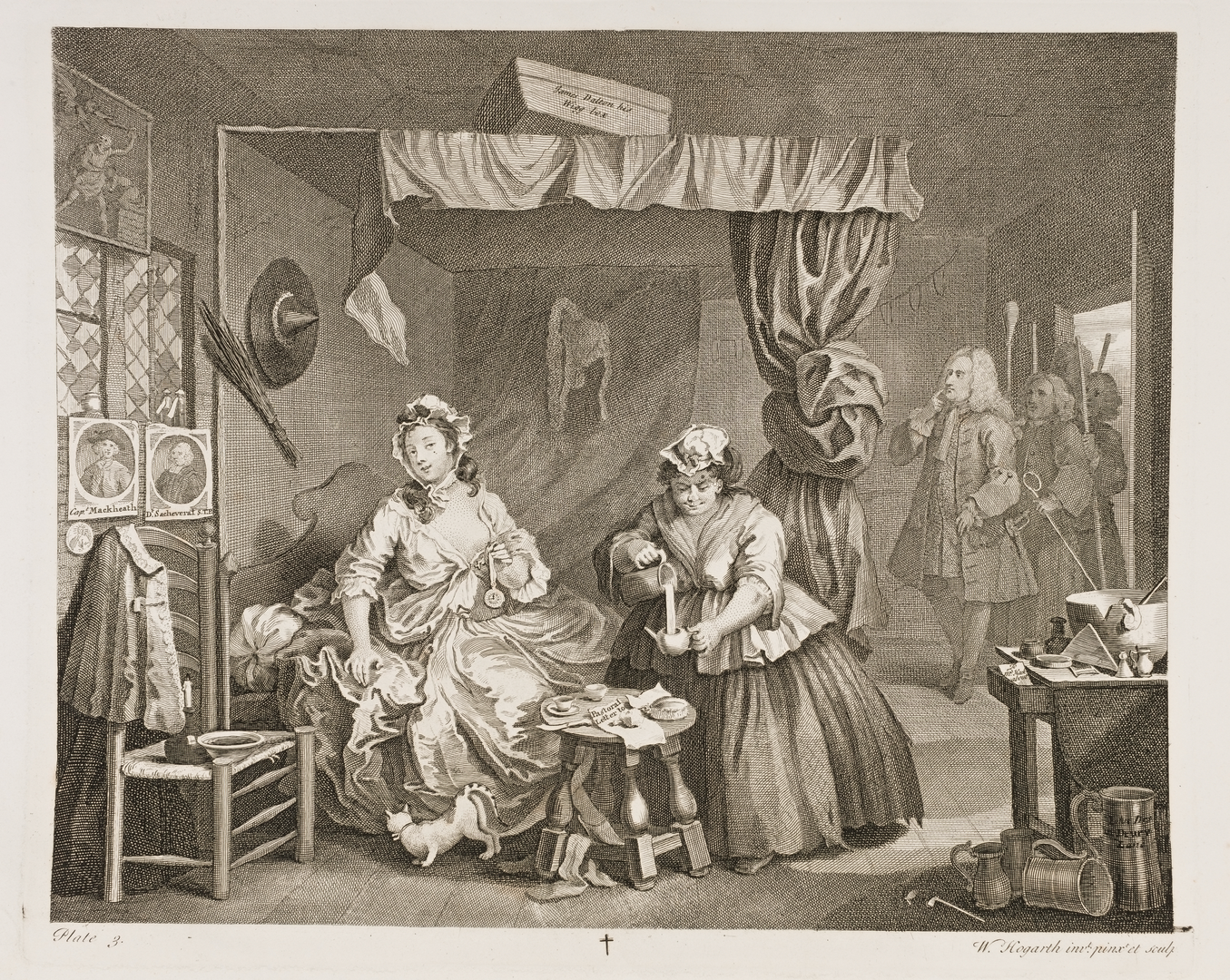 Daniel Defoe’s later novel Moll Flanders purports to be a memoir with Defoe as its editor and self-professed censor. It is filled with characters we know only by their aliases, including Moll herself. “It is enough to tell you,” Moll says directly to the reader, “that as some of my worst Comrades, who are out of the Way of doing me Harm…knew me by the Name of Moll Flanders; so you may give me leave to speak of myself, under that Name till I dare own who I have been, as well as who I am.” Born in Newgate, the notorious prison in the City of London, Moll’s life unfurls with rollicking panache as she moves from place to place, husband to husband, and, eventually, theft to theft as she descends into the criminal underground of the city. The only woman with whom she creates a lasting bond is a midwife who steps in to help her at an opportune moment. The midwife, generally known by the name of “the Governess,” proves to be a character whose teachings indicate accomplishments applicable far beyond the parlor, and whose background parallels the complexity and fascination of Moll’s own.

Defoe himself seems to be taken by this character so much that in his preface to the novel, he calls the midwife’s story one of the most “beautiful parts” that he doesn’t have time fully to relate, but that merits a separate volume in itself. “The Life of her Governess,” he says, “seems in a few Years all the eminent degrees of a Gentlewoman, a Whore, and a Bawd; a Midwife, and a Midwife-Keeper, as they are call’d, a Pawn-broker, a Child-taker, a Receiver of Thieves, and of Thieves purchase, that is to say, of stolen Goods; and in a Word, her self a Thief, a breeder up of Thieves, and the like, and yet at last a Penitent.”

By including the business of midwifery in the same breath as thievery, Defoe provides a salient instance of how the midwife has often been an ambiguous figure both in the history of literature and within the history of labor. By the eighteenth century, the newly-coined “man-midwife,” and the (male) physician who began to include labor and delivery as a lucrative addition to his services, while still controversial, had reached acceptance to an extent that they posed a significant social and economic threat to those working in one of the few historically uncontested roles for and by women.

Readers soon find where on the social scale Defoe’s particular midwife stands. After undertaking adventures in the countryside, where Moll meets and marries her most-beloved husband, an Irish highwayman named James, she finds herself returning to the capital alone because it is not presently convenient for her companion to be seen there. Before they part, they absolve each other of marital responsibilities. Moll finds herself without friends and, to all appearances, carrying a child out of wedlock. Her landlady takes notice: “she sent for a Midwife of the right sort, that is to say, the right sort for me.” Introduced as Mrs. B—, and alternately referred to as Governess, Mother Midnight (a term encompassing both midwife and bawd), old Woman, old Beldam, and Mother, Moll learns almost immediately that she has met a woman whose talents outpace those around her.

Although Moll’s depression had deepened into an encompassing illness, once the midwife assures her of her discretion and that she will be well cared for, her very words have a rehabilitating effect. They “put new Life and new Spirit into my very Heart; my blood began to circulate immediately, and I was quite another Body.” The moment stands out in its use of language readers would sooner expect in a conversion narrative—here it appears in this world of itemized bills of sale and fluctuating bank accounts that govern the lives of so many of Defoe’s characters. The ambiguity of Mrs. B—’s character deepens, however, as Moll moves into an apartment in her capacious house that, under the sign of the cradle marking the midwife’s profession, Moll finds is host to many women in predicaments similar to her own.

The question of what to do with the child once it was born was a difficult one.  At the time of the novel’s publication in 1722, it would be seventeen more years—and after Defoe’s own lifetime, in spite of his early advocacy for this cause—before the first foundling hospital was established in London in 1739.  Moll herself was a child of the same circumstances—fatherless, her mother “transported to the Plantations,” she was passed from place to place until by luck she ended up in the countryside with a kind woman who provided her with the rudiments of education and means of gaining employment once she came of age. In Moll’s discussions with the midwife, it is clear that she is aware that her already difficult childhood was fortunate compared with the fates of other children born in similar situations. Again, the Governess assures Moll that the child would be placed in the country with a family who, for an annual fee, would care for him. Eventually, Moll accedes to the plan. It is one of many troubling dimensions to the novel, where “bastard” children are born and disappear from the narrative, paralleling the invisibility and neglect they faced in English society at the time. Defoe’s brutal realism on this front, highlighted by the Governess’ council to Moll to “be contented with things as they must be, tho’ they are not as you wish them to be,” mirrors William Hogarth’s in his widely-circulated Modern Moral Series of the same period.

Despite Moll paying the least of Mrs. B—’s wards, she is treated with the utmost circumspection and care. When her time comes to give birth, “my Governess did her part as a Midwife with the greatest Art and Dexterity imaginable, and far beyond all that ever I had had any Experience of before. Her Care of me in my Travail, and after in my Lying-Inn, was such, that if she had been my own Mother it cou’d not have been better.” Just as Defoe-as-editor allows Moll this complimentary account of the midwife’s skill, he is quick to undercut it with further details of her past. Her criminal history as a successful pickpocket seems to be the source of her skill in child delivery—the symbolism here is unavoidable—and with a “bewitching Eloquence, and so great a power of Perswasion,” in both pursuits she preserved her safety from the gallows.

After the birth, Moll moves on to another marriage and thereafter becomes widowed, once more being left penniless. She finds herself advanced enough in age that marriage and childbearing are no longer practical means toward securing wealth, and she casts about, with increasing desperation, for a way to sustain herself. Finally, she confesses, “The Devil carried me out and laid his Bait for me,” and she steals a bundle of linen left unattended—a felony crime and punishable by death. With these goods and more on her hands, she finds herself once more in her Governess’ path. Having been, since they met last, herself financially ruined by a lawsuit, still she was a “stirring bustling Woman, and had some Stock left, and she was turn’d Pawn Broker, and liv’d pretty well.” The worldly Governess recognizes Moll’s skill and, Moll says, “gave me such Directions, and I so well follow’d them, that I grew the greatest Artist of my time,” with the agreement that the Governess would receive the stolen goods, take a cut from their sale and, eventually, orchestrate future heists.

Lest the success and colorful episodes of this criminal history overshadow the moral purpose of the novel, Moll eventually is caught, convicted, and sentenced to death. Of course Defoe, a Dissenter who in his own life reinvented himself many times over, ensures that both Moll and the midwife repent and undergo conversion experiences after the larger pattern of the spiritual narrative. Positioned to end her life in the place where she was born, Moll’s conversion in Newgate—and the eloquence with which she expresses it—so moves the minister to successfully arrange her transport to America in place of her death sentence. In however improbable a boon over and above this miracle, she reunites with her beloved James and they end their days together as prosperous farmers in the New World. As for the midwife, though she herself was not implicated, Moll’s conviction causes her such distress and guilt that she, too, seeks out a minister and begins the “Work of a sincere Repentance.”

Moll informs the reader of her final departure from England and her last scene with the Governess, “a dear Friend, and all the Friends I have in the World.” She continues, “I was never so sorrowful at parting with my own Mother as I was at parting with her, and I never saw her more.” There is a plaintive note to the brevity of this concluding remark. If the final conversions come as an expected part of the plot machinery winding to a close—in the world of this novel, the most life-altering connections are the fleeting ones that happen between people and reveal a thread of meaning, however fragile, in a fallen world.