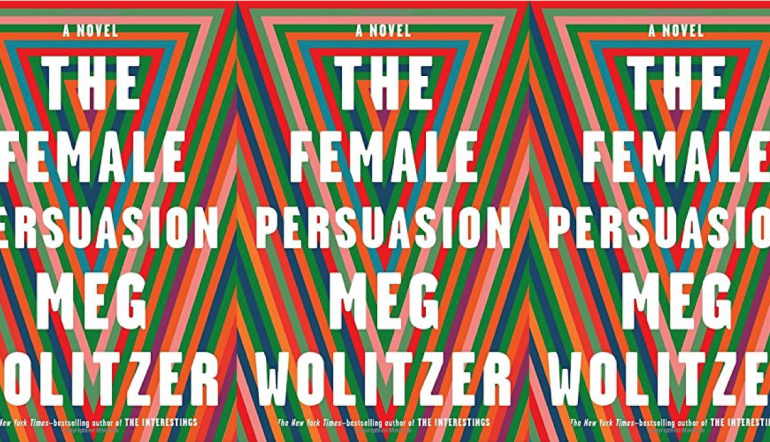 Meg Wolitzer writes novels that contain worlds. The contemporary world that we know, the one that the novel is reflecting, is there, but the world of the fictional characters, characters who become real to us as we read, is also present. In The Female Persuasion, as in a number of her prior novels, Wolitzer uses her wonderful storytelling skills to move from one point of view to the next, allowing us to see these worlds through different viewpoints. It is precisely this ability to see emotional truths clearly through different lenses that allows Wolitzer to create such rich works and for us, in turn, to so fully inhabit her novels.

At the start of The Female Persuasion, it is 2006 and Greer Kadetsky has just started college. We meet Greer in those awkward first days, as she, in turn, meets Faith Frank, a world-famous feminist who will become Greer’s mentor and muse. Their relationship forms the backbone of this novel, and it is Greer who takes the lead, part of a new generation of feminists, determined to make a difference. There’s also Cory, Greer’s boyfriend; Zee, Greer’s best friend from college; and Emmett, a businessman from Faith’s past who finances her foundation.

Each of these characters takes a turn in telling the story, as we move from 2006 to the present. Part of the joy of a novel like this is in the surprise of who-gets-to-tell-the-story-next; part of the frustration is landing on a character in whom you’re not all that invested or when the novel strays too far from the narrative present. This a long book, with some long chapters, especially early on, and there were occasionally moments when I caught myself thinking “But, wait, I want to know what happens to Cory!” or “What’s going on with Zee?” But the roving POV largely works here because Wolitzer is such a master at this form.

Wolitzer’s writing is always so comfortable. It never feels strained or effortful; it’s like a friend telling you a story. There’s wonderful humor throughout—how can you not smile every time you read that Cory works at “Armitage & Rist” or that Zee works at “Teach and Reach.” And she has the amazing ability to move from present to past and back to present again in an almost seamless fashion. Much of each chapter, in fact, takes place in the past as Wolitzer fills us in on each character’s backstory and what’s happened since we saw them last. And yet it never quite feels like that, because she’s able to keep the momentum of the present moment unfolding at a quick pace. We become so engaged in the world of the characters that we’re equally interested in the past and the present.

Wolitzer is able to get at the heart of each of these characters. We may not like them all equally, but Wolitzer’s empathy for each of them shines through. Greer is a terrific lead for this book; it’s almost as though we grow up beside her, as she begins to understand how the world really works. Cory is particularly appealing, as he makes complicated life choices, prompting Greer’s mother to say, “…I feel like Cory is kind of a big feminist, right?” (Could there be more Corys in the world, please?) Truths and ideas are unpacked here in ways that make sense, in ways that feel fresh. Zee and Greer talk about power, and Zee thinks: “To live in a world of female power—mutual power—felt like a desirable dream to Zee. Having power meant that the world was like a pasture with the gate left open, and that there was nothing stopping you, and you could run and run.”

Several big ideas run thoughtfully through the book, linking it back to the outside world. The most important, perhaps, is the assessment of the ongoing feminist movement. Faith is one generation; Greer is the next. This is Greer’s novel, not Faith’s, although Greer’s success is built on her belief in Faith (see what Wolitzer does with names?). But before Faith, there were generations of other women, fighting the good fight, and after Greer, presumably, hopefully, there will be more. Each generation makes progress, in different ways and in different arenas, Wolitzer seems to be saying, but the work will never end. It is because of the legacy, though, because of those who came before —notwithstanding mistakes that were made—that the fight can continue.

The novel also examines the role that ambition and career play in our lives. Greer and Cody are close to the stereotypical type A high school students that we all know. The top of the class, from the reading groups in elementary school right up to the Ivy applications. Toward the end of college, Greer realizes: “Everyone was thinking and worrying a little about the long run, that abstract road that supposedly might lead to happiness, before it led to death.” But somewhere along the line, in fact all along the line, that ambition comes into conflict with other needs and desires: family, love, a meaningful life. Wolitzer seems to be pushing back against the idea of ambition, or at least against the idea of the predetermined life, of the stereotypical definition of success. Things happen; life gets in the way. There is more than one path to a successful life; there are many ways to make a difference.

And, that, too, makes for a great novel. What a disappointment it is when a novel goes exactly where we expect it to go, when the narrative arc is too neatly planned and executed. The Female Persuasion never disappoints: there are twists and turns that keep us guessing, new voices to take on the storytelling task, heartbreak as friends and lovers disappoint, deceive, and part ways, and a marvelous flash-forward at the end that takes us just beyond our present moment. That flash-forward works so well here because it acts, in part, like a soft landing for the reader. Here we are, the book tells us, back in the real world. And, yes, it is still “the big terribleness” that we’ve been in for the past year and a half but we’ve had a respite for a bit, as we’ve lived in the worlds of The Female Persuasion. We’ve cared and worried about Greer and Cory and Zee and Faith, but we’ve also considered how best to move forward, how to live a meaningful life.