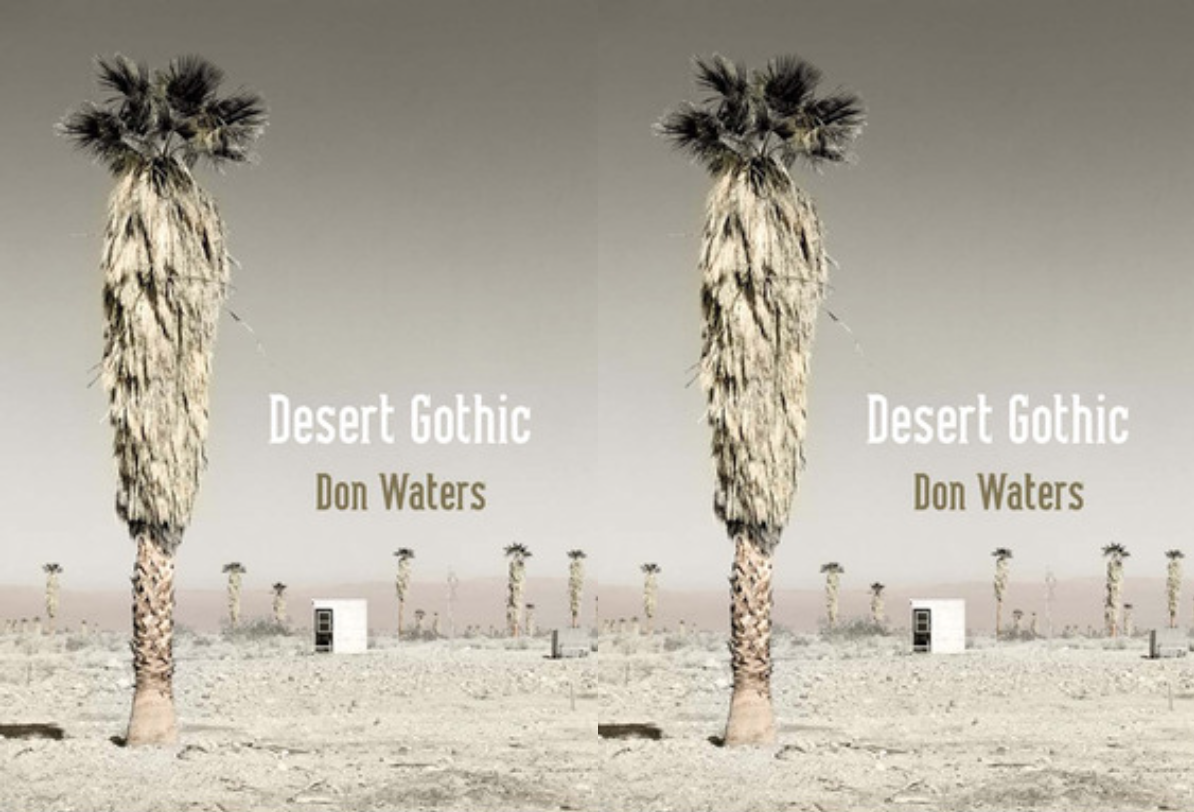 I’m going to be talking to a few authors whose first books I admired and see what they’re working on in terms of a second book. One of the things that interests me here is how writers move from a shorter form to a longer one. Talking about the process while in the process is something I don’t see a lot, and I’m sure some writers would hesitate to do it. I have, however, found some brave souls willing to discuss their work, past and present.

Like Josh Weil, I met Don Waters while at the Sewanee Writers’ Conference. Those folks sure know what they’re doing when they read an application.

I remember seeing Waters’s Desert Gothic in the Sewanee bookstore, opening it to “What to do With the Dead,” the first story, reading that opening line (“Melvin, my coworker, sometimes talked ghosts while preparing a burn.”) and immediately bringing it up to the register. (This was before I had even met Don Waters.) Over the course of the rest of my time in Tennessee and my flight home, I’d made my way through most of the collection. I savored the rest of the stories, trying to draw out the feeling of the conference, which would be forever linked with Waters’s spare, evocative prose.

Despite their somewhat tight-lipped nature, Waters’s narrators have a specific view of the world, and Waters wrings it out of them in concentrated, lethal doses. His descriptions of the desert and its sun-bleached inhabitants are always vivid, but also, by turns, hilarious and heartbreaking.

Waters agreed to chat with me about what he’s been up to since Desert Gothic.

James Scott: What kind of initial resistance did you meet for a story collection?

Don Waters: From agents and editors? I didn’t meet any resistance. But of course there’s a story about that. The only resistance that I can recall came from yours truly. You know, the usual: wondering and fretting and knowing how difficult it is to sell a story collection. Before I began the process of trying to find a publisher, I’d written eighteen or so stories. When I looked closely at what I had, I thought ten of them fit together really well—and those ten eventually became my book.

At that time, an agent in New York had written me and expressed interest in several published stories of mine, and so while I was preparing the manuscript to send off to New York, I also decided to submit the book to the Iowa Short Fiction Award. Months later, I mailed my final manuscript to the agent and crossed my fingers. That was on a Tuesday. Early the next morning, on Wednesday, I got the call from the director of the University of Iowa Press telling me that I’d won the book prize. For those two things to happen within a 24-hour period was surreal.

JS: Winning the Iowa Short Fiction Award put an end to that resistance in a hurry, I guess. What was that like?

DW: Working with the folks at the University of Iowa Press was (and still is) a terrific experience. I can’t say enough good things about them. Of course, everything happened quickly after the initial phone call, which was during the month of January. I believe I had about thirty days to send them my finalized manuscript. That was a tight timeline. The book was scheduled for release in September of the same year. So that only gave us eight or so months. After I’d sent in my version, which was the same one I’d submitted, but with some changes, I received the copyedited one—there was a lot of back-and-forth and even more last minute changes. I wanted every story to be clean, taut. It was a tremendous amount of work, but the copyeditor was a godsend and I learned so much from her. (Thank you, Mary Russell Curran.)

JS: Copyeditors. The unsung heroes of the literary world. They’re like football kickers: you only think about them when they don’t do their job perfectly.

What are you working on now? How far into it are you?

DW: Well, I’m putting the finishing touches on another story collection. Most of the stories have found comfy homes in literary journals, and I’m hoping it will eventually find a publisher. Of course, I’m still rearranging the order and swapping out one story for another—and recently I began a new story for it. At some point I’ll have to just call it finished.

I’m also working on trimming down and streamlining a rather long novel. This novel has been a journey in numerous, numerous ways. There was a time in my life when I would write a novel, edit it, print it out, and put it under my bed—I did that far too many times. Something tells me that I need to stick with this novel and see it through to the end, which means not putting it under my bed.

JS: Yes, let’s keep that novel away from your bed.

Your collection had such a strong sense of place—the deserts of Arizona and Nevada. Are you staying there/headed elsewhere?

DW: The novel I’ve been working on is set in Arizona.

As for the stories, well, I’ve slightly expanded my reach to include New Mexico in the mix and, in one story, the drug cartel mess in Juarez.

Now that I’ve finished these latest desert stories, I’m growing more interested in writing about my other great love: the ocean. I’m drawn to the desert and the ocean with equal enthusiasm, and I think both environments have much more in common than one would think. My characters are often searchers, wanderers, and there’s no better environment to contemplate one’s place in the universe than when surrounded by vast desolation—or when staring into the deep blue.

JS: You grew up in Nevada—do you find it easier to write about if you can look out your window and see it, or is it easier to see it when you’re not physically there?

DW: Let’s just say that Nevada will always be with me. It’s part of me. I spent my formative years there. I can’t shake the place. That said, I find it easier to write about Nevada, or other desert places, when I’m away from them. Still, I often feel the need to visit, and I love it when I do. But while I’m there I’m more like a sponge. After I leave, I wring out whatever entered my pores onto the page.

JS: That sounds gross, though one can’t argue with the results.

Is it more difficult for you to negotiate the open spaces of a novel, or are you enjoying the room to stretch out?

DW: The main issue I face when writing a novel is trying to figure out what not to include. I do a lot of research before starting a bigger project. And all that open space in a novel is so tempting. I want to include everything, but of course, you can’t. I can’t. For this recent novel, I traveled to Tucson several times and hung out with cemetery workers and a group that places water barrels along the borderland for thirsty immigrants trekking across the desert. It was all research. Even though I wanted to include many of these details in my book, they didn’t have anything to do with the story, and so I had to cut them. That’s always the hardest part for me—condensing, keeping only what’s necessary.

JS: Are you finding things are easier with this collection or is the process about the same?

DW: The only thing to change: my new stories are becoming longer. I don’t know when or how this happened. There was a time when I would aim for a tight, 6,000-word story. These days, many of my stories are around 10,000 words. The stories demand the length. It’s a bit irritating, to be honest, but for now I’m going with it.

JS: Do you think short stories are a necessary training tool for young writers?

DW: Oh, I don’t know. That seems to be the trend in creative writing classes, but some young writers may feel energized inside a longer work. Others may find that they’re comfortable with short-short fiction. It really depends on the temperament of the writer, I suppose. Writing a solid short story is hard, mysterious. I’m sure there are plenty of young writers who could write a novel and not a short story. Anyway, I believe the only necessary training tool for young writers is to read, read, read. And write. That’s it: read, write. And be sure to spend time outdoors, in the sun, under the sky, in the water. That’s my advice. Get out every once in a while and remind yourself that there’s also beauty and grandness beyond what’s on the page.