Home
»
Reading
»
The Food-Centered Story: The many faces of hunger 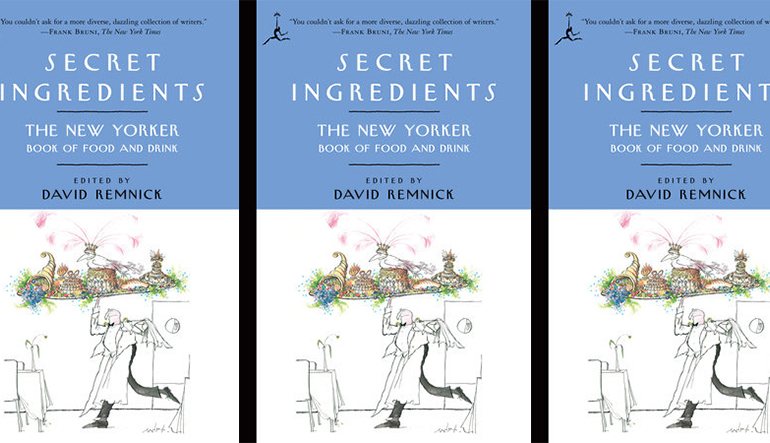 Ten years ago Random House published a wonderful anthology of food writing, Secret Ingredients: The New Yorker Book of Food and Drink. All essays, articles, and fiction featured in the book had earlier appeared in The New Yorker. I bought the book a couple of years after its publication and have since been consuming it bit by bit like a child hoarding something delicious. I have written posts about nonfiction food writing and references to food in fiction. Virginia Woolf’s novels have delectable descriptions of gourmet fare. But what about depiction of food in short stories? The section in Secret Ingredients that most intrigues me is “Fiction,” containing nine short stories. What’s most salient in these food-centered short stories?

After reading five of the nine stories—I have preserved some for later!—I have found a way to begin describing what constitutes the “genre” of food fiction. The food fiction story centers on food and drink, but not necessarily on gastronomy, with associations with passion, craving and desire for either food or something that mirrors the satisfaction—spiritual or carnal—that food provides. In other words, food or drink must play a key role in the theme or plot. Often craving for food or drink brings about disaster in characters’ lives or sates a primordial or elemental hunger.

In “Taste,” a tautly constructed, suspenseful short story by Roald Dahl, the theme centers on wine snobbery. Mike Schofield is an aspiring food and drink connoisseur who invites Richard Pratt, a wine expert, along with a few other guests including the narrator to dinner and challenges Richard to divine the vintage and name of the wine served without looking at the label. A betting game ensues, with stakes going up higher and higher until the crazed wine snobs—host and guest alike—lose their equanimity. It’s the maid who saves the day for the host with her presence of mind.

In V.S. Pritchett’s “Two Roast Beefs,” 50-year-old Mr. Plymbell is a greedy antique-seller who must have more than his share—double, in fact—of food and who wouldn’t hesitate to have his secretary, Miss Tell, pilfer from restaurants and butchers for him. She “flirts” with his hunger as he plants kisses in exchange for morsels and rations. Set in London during the Second World War, the story invests food with hyperbolic value. The story begins with a speech Plymbell loved to give his foreign customers: “One recalls observing, rightly or wrongly, at that time that one was probably witnessing not the surrender of an heroic ally but the defeat of sauces. Béarnaise, hollandaise, madère—one saw overrun.” The story ends with another speech similarly grandiose, referring to the “war on the stomach.”

John Cheever’s “The Sorrows of Gin” shows a child’s perspective of an affluent American family given to the pleasure of cocktails. The child, Amy, is often confined to their house alone with maids as her parents go out socializing with friends. She learns a trick from a maid to keep her parents from drinking: Emptying bottles of gin into the sink when nobody is looking. This act gives rise to crisis as the suspicion falls on the maids, one after the other, who don’t last in the Lawtons household. The crisis results in the girl trying to run away from home.

Italian writer Italo Calvino’s short story,“The Jaguar Sun,” shows that often food is more than cuisine to be consumed for satisfying mere physical hunger. Calvino’s story is an account of a couple’s culinary journey through Mexico. This story has the lushest description of food of all the stories I read in Secret Ingredients. In this story, ancient rituals and ecclesiastical characters feature as consumers and purveyors of gastronomic delights, which the first-person narrator and his companion, Olivia, eat or learn about:

“After that, for us, the thought of nuns called up the flavors of an elaborate and bold cuisine, bent on making the flavors’ highest notes vibrate, juxtaposing them in modulations, in chords, and especially in dissonances that would assert themselves as an incomparable experience—a point of no return, an absolute possession exercised on the receptivity of all the senses.”

The story shows different kinds of satiation—spiritual and carnal. Food is depicted as ecstasy. As the couple travel through the country, food evokes desire in them. They communicate with each other through flavors:

“Did you taste that? Are you tasting it?” she was asking me, with a kind of anxiety, as if that moment our incisors had pierced an identically composed morsel and the same drop of savor had been caught by the membranes of my tongue and of hers.

The climax seems to emerge as the two curious tourists ask the tour guide about the “secret ceremonies,” where the priest assumed the functions of the god, and the victim of human sacrifice became “divine food.” Human flesh becomes gourmet food as “sacred cuisine.”

In Don DeLillo’s“Sputnik,” Erica loves to cook with Jell-O, making chicken mousse and antipasto salad for her family: her husband, Rick, and adolescent son, Eric. She gets creative by chilling tilted glasses and making dynamic-looking diagonal shapes in her Jell-O dishes. The story deploys a stream-of-consciousness technique by interjecting product-label disclaimers, and appears to compare food with sexual craving, especially by referring to the reclusive Eric’s tendency to indulge in self-pleasure and, once, sticking his head into the bowl of Erica’s Jell-O antipasto salad. She disbelieves her son’s explanation for doing it—a scientific experiment—and imagines he’s seeking a “lickable female body part.”

Several of these stories show food as a symbol of desire and craving beyond sustenance. Humans have different kinds of hunger: love, lust, spiritual fulfillment, gastronomy, intoxication, taste, flavor, culinary satisfaction, passion, pleasing others, and mere nourishment. The food-centered short story can weave infinite associations rich with meaning. Food fiction is exciting because it embraces these numerous possibilities.