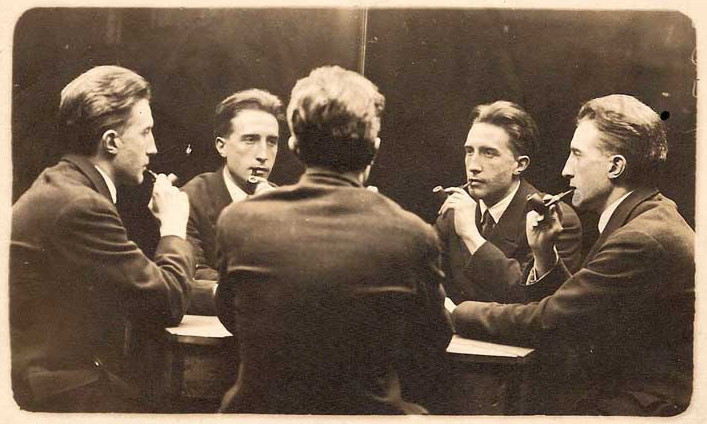 Founded in 1960 by a collective of French mathematicians and writers, Ouvroir de Littérature Potentielle (Workshop of Potential Literature), or Oulipo, was established to identify new forms of writing using numerical and alphabetical constraints. Early member Georges Perec, for example, structured his novel Life A User’s Manuel according to the Knight’s Tour algorithm, in which the knight visits every square of a chess board exactly once. Similarly, Mike Keith used the first 3,835 digits of pi (3.14…) to determine the length of each word in his short story “Cadaeic Cadenza” (the first word being composed of three letters, the next of a single letter, and so forth).

At first glance, Oulipian works such as these seemingly contradict those old saws of storytelling: we do not know where ideas come from, and there is no formula for writing them. For me, this prompted early distrust toward Oulipo: that trendy name, the suggestion of ease—it all seemed too convenient and marketable, a quick-fix formula for improving the creative life. I imagined stiff, impractical prose held aloft as the source of something irreducible. I cringed at the idea of constraints allowed near the expansiveness of art. I will admit to this: originally, I viewed the members of Oulipo more as evil scientists than authors.

Yet this unease also inspired fascination, and further research proved I was misreading Oulipo’s intentions—the group (still active today) does not purport to ‘solve’ literature so much as demonstrate its endless possibilities. While originally exploring the relationship between mathematics and literature, Oulipo later evolved to include writing crafted under a range of self-imposed restrictions, from the formal sestina to the alphabetically-informed lipogram. The surprises of perception that arise from such constraints drew the likes of Marcel Duchamp, Jacques Roubaud, and Italo Calvino, whose collective writing inarguably stands as testament to experimentation and originality. Infinity, after all, is another concept claimed by mathematics.

It must also be said that Oulipo does not necessarily aspire to produce finished works; rather, Oulipian structures are often viewed as a means to access unanticipated material for future use. This is, of course, explicit in the group’s name: Workshop of Potential Literature. In every instance, the madcap challenges embraced by Oulipo are intended to inspire imagination, setting boundaries to be pushed against rather than respectfully minded.

Crucially, Oulipo strives through this approach to call attention to the invisible constraints that haunt the fabric of literature, whether these are popular conventions of creative writing, or an author’s own proclivity to structure their work in a routine manner. In this way, Oulipo is best viewed as creative calisthenics: exercises in overcoming unconscious restrictions by rendering them obvious. Paradoxically, the imposed constraints serve as ingress to liberation and play.

This playfulness can be felt in Oulipo co-founder Raymond Queneau’s “A Hundred Thousand Billion Poems,” in which the lines of ten sonnets are printed on separate strips of paper that can be rearranged to create 1014 different poems. It is likewise felt in more contemporary works, such as Elliot Holt’s abecedarian short story “Picnic, Lightning,” and Harryette Mullen’s “Sleeping With the Dictionary,” a finalist for the 2002 National Book Award. Every poem in Mullen’s collection draws from Oulipian structures, including the wordplay game N+7, in which each noun of a preexisting text is replaced by the seventh subsequent noun in the dictionary.

As Robert Hass observed in a conversation on science and poetry: “Artists almost always start with a kind of play based on elements that are fixed and variable, things that conventions express…on the one hand, and, on the other, departures from those conventions that lead to new ways of seeing and feeling.” According to Hass, “The formal imagination in art — the half-conscious shaping that occurs when an artist is at work — is always working on this problem.”

As I learned from my study of Oulipo, drawing lines around the creative process does not necessarily produce writing that is falsified or restrained. In a recent interview for the podcast On Being, poet Mary Oliver exemplified this truth when discussing the origins of “Wild Geese,” counted among her most influential works: “This is the magic of it. That poem was written as an exercise in end-stopped lines….not every line is that way. I was trying to show the variation, but my mind was completely on that…I was trying to do a certain kind of construction. Nevertheless, once I started writing the poem, it was the poem.”

That an exercise in technique can produce writing of such searing emotional veracity exactly encompasses Oulipo’s aim—the constraints merely serve to focus the lens, frame the canvas. Whatever material results remains a matter of discovery, drawn from the incalculable depths of the imagination.