Home
»
Uncategorized
»
The Full Cleveland and the Salon of the Refused 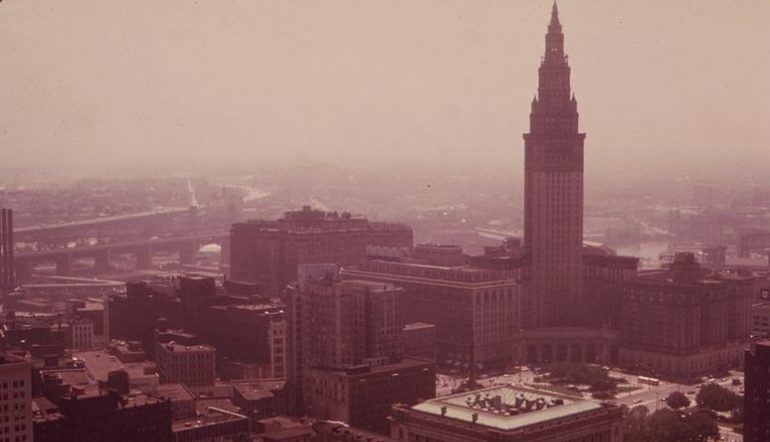 Today we welcome back Alicia Jo Rabins, our second guest blogger from the Winter 2009-10 Ploughshares. Thanks to all who read and commented on our first Get Behind the Plough with Peter B. Hyland. We encourage you to use this space to ask questions and continue conversations.

“The Full Cleveland and the Salon of the Refused”: Part I
Guest post by Alicia Jo Rabins

I’ve had a city-crush on Cleveland for a while. I should say up front, I barely know the place; I just have this feeling we would get along. When the bands I play with tour through Cleveland, we stay in cheap hotels in the business district downtown. The streets are empty and you can feel the bustle that still echoes from the 1950s: dated gorgeousness bouncing off the brick edifices.

“Cleveland” sounds to me like “possibility.” No uncharted territory exists on the surface of our planet, but there is an unexplored frontier of vacancy and fragmented space in cities that have been passed over, left behind, or otherwise warped by history.

I like to think of cities as people. Cleveland feels like a painter friend who happens to be quite beautiful, but is too down-to-earth to make a big deal out of it. You know if they dressed up, they’d be gorgeous, but they never do: they just put on an old sweatshirt and go make their paintings in a weird reclaimed studio in an abandoned building. The real instead of the ideal.

Yahoo! recently rated Cleveland the most miserable city in America. “There has been a net migration out of the Cleveland metro area of 71,000 people over the past five years. Population for the city itself has been on a steady decline and is now less than half of what it was 50 years ago.” Half of what it once was: a partial Cleveland.

The Full Cleveland was described to me by an older gentleman, the proprietor of a hat store in downtown Cleveland, when I toured through there in 2006. The hat store looked like it was from the ’50s and was the only mom-and-pop business remaining on the block. When I expressed admiration of his classy hat selection, the owner told me with a combination of pride and pity at my ignorance that Cleveland was known as a very stylish city, and even had its own look, the epitome of snappy dressing.

There it is: the Full Cleveland, a leisure suit with white shoes and a white belt. As Wikipedia somewhat snidely notes, “By 1978, most retailers were all but giving their inventory away.” It’s hard even to find a picture of the Full Cleveland nowadays, hence the blurry images. What happened to those suits? And what is a country that all but gives its cities away?

Next week, Alicia talks with Julie Patton, a Cleveland-raised artist and writer, about how art survives in the city. This is her first post for Get Behind the Plough, and her second for The Ploughshares Blog.