It’s 1979 and the Mad Men-esque execs were in a cab, on the way to present a corporate identity theme to the bigwigs at GE. The current version was pretty clunky and they knew it: We make the things that make life good.” Their agency teams had spent weeks researching, brainstorming, even songwriting.

Ad man Phil Dusenberry writes about the final moments before the cab dropped him off, “As we honked, bounced, and stalled our way through traffic, a beautiful thing happened. Maybe it was the last pothole, but the theme line, full-blown, popped into my head. ‘GE… We bring good things to life.’” That GE slogan lasted for more than twenty years.

Why is that some ideas seem to, at the last minute, congeal in a way that they didn’t when you had all the time in the world?

In my professional life, I’ve certainly seen many versions of the GE story—hours spent brainstorming a campaign name only to have the perfect one arrive ten minutes before a client presentation. Or, wrestling with a particular communication challenge for days before the solution comes, almost instantly, in the middle of the night. Or in the shower.

“Having deadlines is so helpful.”

Early on in my journey as a Ploughshares  blog contributor I began to notice an uncomfortable pattern: even if I started a post well before its due date, it absolutely did not come together until I was pushing the limits on that due date. But it’s not like I was sitting around waiting for the muses to come. I was writing and thinking and revising and wrestling and revising again. I was staring at the computer screen for hours at a time trying to figure out if that sentence was really saying what I intended for it to say. Too soon, the due date would arrive and I’d be scrambling. But then “magically,” usually within the last hour before I submitted a post, the idea would come together.

Why oh why can’t we live in a world where we produce great things without deadlines, without the stress and low-level anxiety that comes from not being ready? There are, of course, all sorts of psychological and creative theories on this. Theorizing aside, the simple truth is this: when you have due dates for writing, the work does, eventually and inevitably, get done.

“I don’t get anything done until I have a deadline.”

My writing group often decides who submits for our next workshop based on who’s most desperate to get something finished, a.k.a. who needs a deadline. Novelist Elliott Holt recently tweeted: “I’ve said it before, I’ll say it again: Deadlines are lifelines.” But we’re not the only writers clinging to a deadline as lifeboat. Guardian columnist Robert McCrum explains a little about Dickens’s process:

Dickens almost always subjected himself, self-consciously, to writing for serialisation, meeting a succession of deadlines with carefully constructed, and sometimes improvised, cliffhangers… Dickens’s writing is always spontaneous, majestic and intrinsically comic, apparently without a care in the world, even when addressing momentous themes of life and death. But it is also urgent and driven, with a relentless momentum inspired by those looming deadlines. Dickens, then, is a novelist who benefits, creatively, from the restrictions placed on his art by the prevailing publishing conditions. 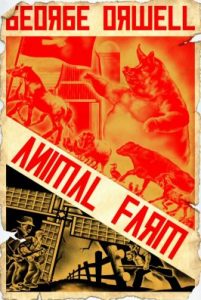 Another example McCrum cites is Orwell’s Animal Farm, an allegorical novel written in a mere three months. I imagine, having read Orwell’s “Why I Write” essay, that he was compelled by a certain urgency of the time, his need to respond to current politics. He instituted—and responded to—his own deadline.

I used to think that I needed wide open days and uncluttered hours to get important creative work done. Sometimes that’s true. But I’ve also learned that perhaps more important than what happens when I’m staring at the page is what happens when I’m not. How I chew on the idea in my downtime. My subconscious must know about the deadline—needs it, even—and works feverishly to pull it all together. Perhaps it’s even a pipe dream to imagine having something done early enough to bask in its finished glory with a glass of wine. And maybe that’s not even the point—writing is work and the furious finish is part of the process.