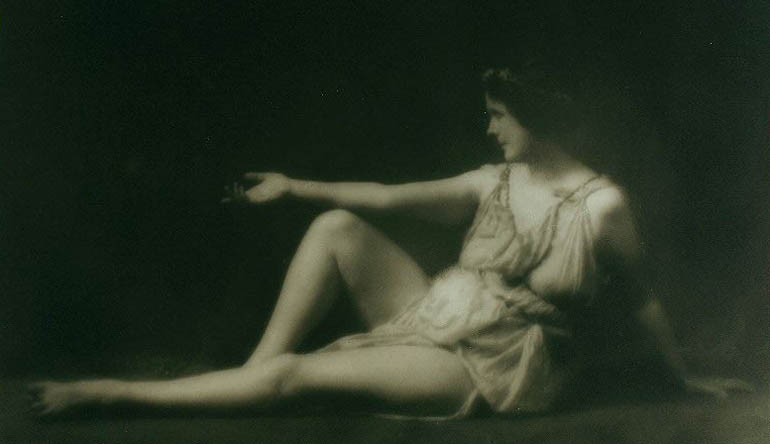 Only four seconds of film footage exist of Isadora Duncan dancing, at what looks like a garden recital, spinning with her arms crossed in fourth position. She’s wearing her signature toga, presumably dancing barefoot. She reported hating that footage, and despised being filmed in general, arguing that her style of dance was about organic movement rather than positions, which is certainly hard to capture on film. So why does she still occupy significant space in our cultural mythology if we can’t even verify her exceptionalism? Her cult following makes her legacy mostly word-of-mouth, and we can trace how her revolutionary ideas about modern dance have influenced later movements. We mostly are left with Duncan’s memoir, My Life, in which she insists on her own genius, the largeness of her mission in changing the face of dance, in messy and disjointed anecdotes, with all the grandeur of her larger-than-life persona.

Amelia Gray picks up the dropped stitches of Duncan’s own autobiography in her new novel, Isadora, in which she shines her spotlight on Duncan as a grieving mother, toeing the line of sanity. Isadora famously had two children—her daughter, Deidre, with Gordon Craig (son of actress Ellen Terry), and her son, Patrick, with Singer sewing machine heir Paris Singer, both of whom were killed in a car accident when their car drove into the Seine. Gray’s novel switches its narration between the grieving and half-mad Isadora, Paris Singer, Duncan’s apparently long-suffering sister, Elizabeth, and Elizabeth’s lover, Max Merz. We see the sisters’ fraught relationship, Elizabeth’s particular interest in grizzly news stories, and Isadora eating her children’s ashes. The book allows our gaze to lurk in the shadows cast by the family’s grief, and explores what it means to make art even when the world is crashing down around us.

Duncan’s memoir certainly reads as fictional: after her two older children’s deaths, she meets a stranger on the beach in Italy, and when he asks how he can help her, she responds, “Save more than my life. Save my reason. Give me a child!” Gray plays with Duncan’s story by painting this improbable side note as a full scene. Romano, the stranger who does, in fact, “give” Isadora a child, tries to lift her, sopping wet, from the ocean waves, but Isadora narrates, “When he tries to stand again, he makes it halfway up but loses the strength in his legs, and I hit the ground rolling.” Gray holds Duncan accountable for her bravado, creating humor in the face of tragedy to show exactly how people—even self-proclaimed geniuses—find vibrancy even in grief, which, as Gray says everyone wants to try on “for a little while, but nobody wanted to claim.”

Gray’s ability to poke fun at Isadora’s grandeur never comes across as mean-spirited, nor does it undo any of the careful work Duncan herself did in writing about her life. Instead, it deepens her careful crafting of her persona with delight and admiration. While her grief and art form take center stage, many paragraphs end on a note that Duncan would probably love. For example, in a chapter from Paris Singer’s point of view as he contemplates divorce from his wife in America, by stating his wife was so different from “Isadora, who once demanded that a sofa be brought to her in a restaurant and, when her request was refused, ruined the entire meal trying to properly pose in a straight-back chair.”

Ultimately, and unavoidably, Gray encounters the problem of using one art form—writing—to reference another—dance. But she describes the feeling rather than movement to give us the larger sense of Duncan’s own dance philosophy and technique. We see Isadora going “hand to feet in a dancer’s stretch,” her spine beginning “in gradations to ease.” And towards the end, Gray delivers a magnificent description of a pregnant Isadora appearing in all her fullness, onstage: “She moved with a very purposeful subtlety to balance out the obscenity of her body under her thin tunic.” As the girls in Duncan’s school follow and mimic her onstage, “She transformed from the raw materials that compromised her to an elegant effigy, an idol poised and ready for their worship.”

To use words to capture dance is an act similar to using film to capture those precious four seconds of her dancing. We can name the positions or steps she moved through, specify which leg is raised, or which direction she turned. But the novel best captures the grief housed in a childless mother’s body, the woman who appeared onstage pregnant with a baby she conceived—and lost soon after birth—to replace the first two. We only have word of mouth and Duncan’s memoir to tell us why we refer to her as the mother of modern dance. I am still struck by the image of the scarf that strangled her just as her memoir was set to be published—fluttering from her neck as she whizzed along in the car, then winding around the wheel of the car, an important and iconic totem of her costume, and of her demise. Duncan defied definition, capture, life, and death. Her mythology is complete—we just can’t say what was real and what was a metaphor. But by seeing her as a real woman, complex and tragic, brilliant and revolutionary, we reach closer to her as she wanted to be remembered, and perhaps, as she really was.