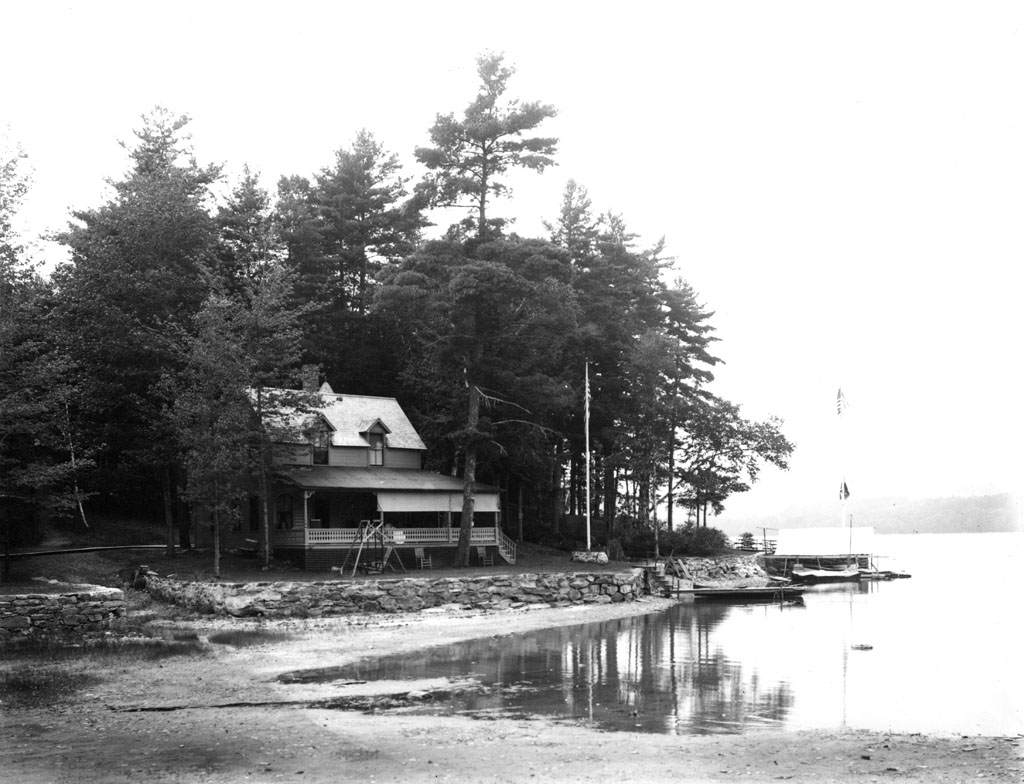 Haunted houses are liminal spaces by design, the boundary between life and afterlife blurred and the line between truth and imagination called into question within. But the most effective haunted houses in literature blur even more lines—between past and present, and memory and reality. Throughout Lucy Wood’s debut novel, Weathering, even the boundaries between physical spaces are challenged as the distinction between the house Ada inherits from her dead mother, Pearl, and the river outside it becomes less concrete. This blurring frames the lives of the book’s three main characters: as Ada and her six-year-old daughter, Pepper, spend more time in the house and around the river, their experiences not only overlap with and repeat Pearl’s life, but also intersect with Pearl’s ghost.

The house that Ada inherits is set back from a quiet road, surrounded by woods and a river in a damp, rainy valley. When she and Pepper first arrive at its front door, she realizes that it hasn’t been well-maintained in the thirteen years since she last visited:

There was the house, low and stooping. It had always looked like a listing boat, propped up and lopsided with its barns and outhouses tacked on. Brick and wood and corrugated metal. A porch added on haphazardly. The chimney perched at a wild angle, about to crumble off any moment. Rust bloomed like moss, moss in the gaps on the roof where tiles should be. Cracked windows, the roof buckling like an old tent. Ivy garlanding everything.

This description makes the house rife for haunting. Wood makes it clear that the house has been abandoned, and the porch, chimney, and roof all threatening to fall make the structure dangerous. But these collapsing foundational elements also suggest that the house is not a structure firmly distinct from its rural surroundings; in fact, moss and ivy have covered the house, overtaking the tile and the cracked windows, letting the rain seep inside. The boundary between inside and outside, between the house and the woods, is blurred from the start.

This blurred boundary and the state of disrepair have more immediate consequences for Ada and Pearl. It’s late fall when they arrive, and the wind, already sharply cold and heavy with the threat of rain, passes through the weak walls and cracked windows. When Ada wonders how much colder the house will be in January, just a few months away, she quickly reminds herself that she and Pepper will be gone by then. She has returned only to fix up and sell the building she has inherited. Ada isn’t planning on becoming trapped in a remote area in a house that would be hard work to make live-able and harder work still to live in.

What Ada doesn’t realize, however, is that her mother arrived at the house with the same intent. Throughout the novel, Woods uses images of the house and sounds of the river to bridge the transitions between chapters, particularly when shifting times, locations, or perspectives. Harsh wind breaks a window and, as snow seeps inside, Pepper glimpses an old woman she doesn’t know as her grandmother at the end of a chapter; this cracked window opens the next chapter, as Pearl remembers that it had been broken before. Pearl had moved into the house with Frank, Ada’s father, when Ada was a baby; the couple planned to fix it up, but Frank left frustrated by the repairs, the claustrophobic sounds of the river, and the obligations to parent Ada with Pearl. He walked out when Pearl went into town for milk, without even leaving a note or making a phone call later to explain. Pearl could tell he was gone for good because he boarded up the window before he left, carefully cutting and fitting planks of wood over the cracks so that it would hold. But Pearl hadn’t been concerned about it holding for long. The chapter ends with Pearl, now alone, deciding to leave: “Nowhere else to go, but she whispered to Ada that they wouldn’t be staying here, not for long anyway.” Despite this resolution, however, Pearl stays and stays, and ends up haunting the house she had never meant to spend her life in.

Knowing that Woods uses shared images to bridge the shifts between characters, to connect their experiences, it’s significant that the next chapter opens not with Pearl or even Pepper, but with Ada. Throughout the novel, Ada and Pearl coexist, but it is Pearl and Pepper who interact, though only outside. When Pepper sees the old woman outside the broken window, she doesn’t recognize the grandmother she never met; she does, however, recognize the old woman she’s seen and met by the river. Exploring the house for the first time, Pepper notices the sound of the river right away: “Something roared and thumped. The river. It sounded like it was in the room.” It’s just after Pepper remarks on this sound that she notices a woman—Pearl—outside. Soon after, Pepper walks along the river and again notices the sound of the water: “The river was flinty and made a plunking noise, like someone was throwing in rocks.” Pepper’s interactions with Pearl are marked by the same shared images that Woods uses to the bridge the transitions between time and characters’ perspectives: images of the broken structure of the house and the overwhelming sounds of the river, both outside and within.

Although Pepper sees Pearl through the cracked windows and talks with her outside the river, Ada doesn’t hear or see her mother’s ghostly presence—at least not until later in the book. Despite Ada’s resolve to leave before January, she and Pepper are still in the house when the month rolls around. Even more, Ada has taken a job cooking in a local pub, and Pepper has enrolled in the village school. On New Year’s Day, Ada runs a bath in the cold morning, but despite the noisy effort of the pipes, the water is lukewarm when Ada gets in: “The pipes were chuntering, or maybe it was Pepper speaking. She came back up, water streaming off her face. Her mother was sitting on the toilet seat. Her skin and hair were the same colour as the dim light and there was snow lodged under her nails. A rim of smooth ice around the bottom of her boots.” Pearl appears to Ada for the first time not simply in early-morning hours of a new year, but just as Ada surfaces from the water of her tepid, murky bath; Pearl, meanwhile, is seated casually on her own toilet, in her own house, and she brings inside the snow and ice from outside. More importantly, the snow and ice remain intact.

While Pearl sits with Ada, she tells her about the river. Pearl gestures to her daughter’s bath and explains what happens in the shallow pool in the river. When Ada corrects her mother, Pearl moves on to describe the water “moving faster and getting deeper.” Ada listens and realizes how strikingly similar the sound of her mother’s soft speech is to the river itself: “Her voice seemed to bubble and drum. Sometimes a silty crunch on her teeth, sometimes she seemed to be rolling stones around on her tongue.” The sound of the river here not only marks the connection between these characters, but also signals a breakdown in the house’s physical separation from the river, in the boundary between life and afterlife: Pearl hasn’t previously been able to bring the snow and ice inside without melting, and she hasn’t been able to interact with anyone inside the house before.

The similarity between the sound of the river and the sound of Pearl’s voice also makes Ada reflect on her mother’s connection to the river and to the house. She is “reminded all over again how well her mother knew the place, how she’d belonged: the weather not difficult and unexpected, the river not strange, the valley not lonely or trapping.” This realization proves to be a turning point; although here Ada reflects on how her mother belonged and how the valley wasn’t lonely for her, Ada also begins to realize that she isn’t lonely. Her job has been going well; Pepper has made friends at school; they both celebrated the New Year with friends from village. Perhaps Ada even belongs herself, and maybe Pepper belongs, too.

It’s shortly after Ada’s realization that the river overflows in a rainstorm, crashing into the weak walls and cracked windows and flooding the house. Then, with the physical distinction between the house and the river collapsed, Ada sees her mother again: “There was a huge puddle on the front step that kept washing in. Rain drove into her face. She turned and saw her mother leaning against the wall, shaking her head as if trying to clear her thoughts. Water pouring down her hair and back.” Pearl appears to Ada again through water, again physically settled on the house, this time against a wall. Exasperated, Ada asks her mother if there are more sandbags to form a barrier to keep the water out, but Pearl tells her there’s no keeping the water out. She tells Ada not to fight against the force of the water in a voice that “drummed like the rain.” When Pearl herself soon feels the same force of the water sweeping her away, she lets it.

After Ada begins reconstructing the house she has decided to stay in, she walks with Pepper to the river and, as she watches her daughter, Ada also watches the water:

She had forgotten, or maybe never noticed, the sound the river made when it lapped at the shallow edges, how the drizzly mist clung to the surface like static on fabric. And all the shifting colours. She’d thought of it as dull and monotonous, the same old river from one moment to the next. But it changed second by second: now a clump of feathers tumbling down, now a plank of wood, now the water riled up around a snapped sapling.

Here, Woods recalls the sounds of the river used to mark the overlapping characters and the blurred boundaries, but this time, the sounds are revised. Even though the experiences of these characters overlap, and Pearl’s ghostly presence blurs the line between past and present, the river and the house that Ada and Pepper experience aren’t exactly the same as Pearl’s. These settings are renewed and reconstructed, layered with memories and associations. Perhaps more importantly, they are newly framed by the images of the house coming back together and by the softer sounds of the river, its movement now safely outside.