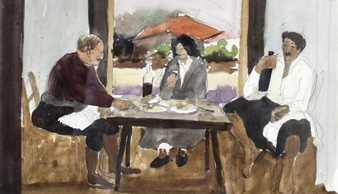 Lawrence Durrell’s life-long relationship with Greece began early. Like Patrick Leigh Fermor, he too was the product of British colonialism, having been born in Jalandar, a case that may be more common than is often realized in thinking about Britain’s involvement in India. Sent off to England at the age of 11 for school, he would eventually fail his university entrance exams.

Again much like Fermor, with whom he was friends, Durrell was to spend most of his life outside of the United Kingdom, particularly in Greek-speaking areas. He called England “that mean, shabby little island,” in a letter to Henry Miller, that “wrung my guts out of me and tried to destroy anything singular or unique in me.” Indeed after spending his own time in London in the early 1930s, he convinced his family, as well as his first wife, to move to Corfu (Kerkira). This move would cement his life perpetually abroad – and indeed it seems that despite his work for the British government and his parentage, he does not seem to have ever held British citizenship.

Durrell would eventually become known for his Alexandria Quartet, which draws entirely from his time spent in Egypt during World War II. In 1953 he escaped to Cyprus hoping to have a rest from the turmoil of the Balkans, where he had served as press attache in Belgrade. The calm he hoped for in Cyprus was not to last, despite the calm beginnings of warm friendship with his neighbors in the Greek village of Bellapaix, a place that is now located in Northern Cyprus. A year into his stay on the island, he was drawn back into working for the British government for a fifth time ― as the director of public relations in Cyprus.

To read his memoir about this time, Bitter Lemons, is to see the gradual transformation of ideas as they were then from Durrell hoping to appease both the British and the Greek Cypriots in the messages his office put out to trying to convince then Secretary of State Harold Macmillan that support from Turkey was necessary in resolving the problems that the enosis movement had brought up to entirely giving up on the situation. Throughout the text, though, one cannot help but think that even if the events of the 1950s and following decades on the island would inevitably lead to the same conclusion, a divided island and the only divided capital city in the world, Durrell’s involvement must have extended understanding for a brief time due to his knowledge and feelings of goodwill toward the region.

More than anything, Durrell wanted to know Cyprus “through its people rather than its landscape, to enjoy the sensation of sharing a common life with the humble villagers of the place” rather than dive first into history to inform his stay. On arriving he declares a bus stop scene full of chaos to make him feel as if he’s home, and with tenderness he defuses tension with a neighbor through praise and makes a friend through the falsified story of his brother’s death at Thermopylae. At times one would accuse Durrell of patronizing the Greek Cypriots if it were not for his awareness of the behaviors his own countrymen who “lived as if we were in Cheltenham” with “terrace[s] laid with little tables and religiously marked ‘Afternoon teas’.” The British in Cyprus at the time rarely knew even a few words of pleasantries in Greek or Turkish according to Durrell, words that would “cement friendships and lighten the burdens of everyday life.” His assessment of his fellow counterparts in the Foreign Affairs Office in London is not much different, citing that “their information was largely based on reports from their own departmental officers which, while factually accurate, lacked political pith and the sort of interpretations which are essential” to truly understanding the way enosis stood from the view of the United Kingdom, Greece, and Cyprus. Durrell with his views from all of these sides knew he could step in and help with more knowledge than most, and though he does get involved to fix his financial woes due to fixing up his Turkish home in Bellapaix, he seems to give the work an honest try.

Though the situation would prove in hindsight to be inevitable in its outcome, even Durrell writes of the early days, “The tragedy is that it need not have happened,” and then immediately retracts the sentence, saying that he doesn’t know if his way of dealing with enosis would have worked had it existed in an implemented policy. He acknowledges that retrospect is odd as it builds an alternative reality in which what happens is the product of fate, not of a series of events that were not bound to connect to happen to build into a certain outcome. When Durrell began working for the British government, the climate and the kindness of the people lead him to believe that the movement would die out.

Durrell notes too that all too soon a conflict becomes normalized to those around it, and in doing so he reminds me of what I and others who have left Istanbul had normalized for months -bombs, threats against the metro, and more recently the steady arrests of over 32,000 people since the coup attempt and the firing of over 2,300 academics. Even in leaving, the sounds of fireworks exploding push a gut reaction of worry. On a not-yet-cold Saturday night in the upper West Side of Manhattan, a friend who also left Istanbul and I turned when we heard hollowed popping noises we couldn’t see from beneath the looming skyscrapers. “They have to be fireworks,” we said, and yet, we looked at each other with worry, unconvinced that they weren’t bombs until we checked Twitter.

Durrell eventually gets ready to leave Cyprus, and just before he does he hears gun shots while on a picnic. In the olive grove with his Greek Cypriot friend, Panos,

the echoes of …[the shots] rolled about for a while on the range, sinking and diminishing as if they described the contours of the land in sound; then silence closed in again, and everything was still save for the rustling folliage in the trees around us.

He and his friend look at one another, and on hearing no more shots, they relax. Only when they see a man with a gun approach do they tense up again, and when the man is close enough that Panos can see him, that the “’sensation so foreign as to be frightening in itself’” leaves as he is recognized as a close friend.