Home
»
Critical Essays
»
The Importance of Uselessness: Language and Nature in the Poems of A. R. Ammons 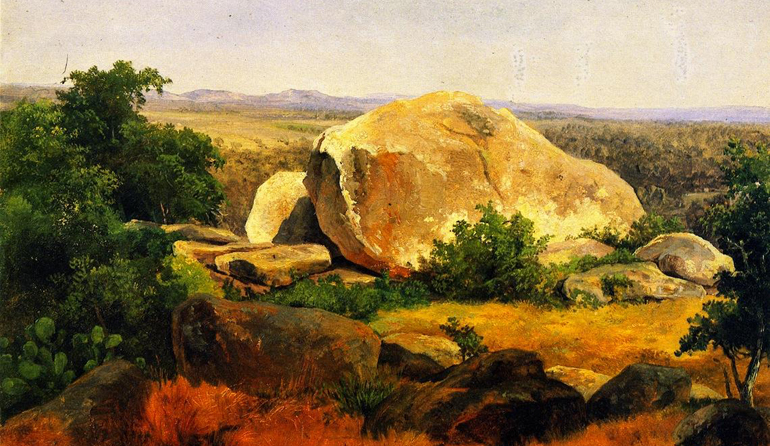 The poems of A. R. Ammons focus on easily overlooked, easily dismissed elements of the natural world. Ammons observes the inevitability of time both on a microscopic and global level: how time affects everything from maggots to “drift-logs.” Though poppies and golden leaves make appearances in his poems, Ammons is more concerned with forlorn, sharp natural features than with picturesque landscapes. His poems expose permanence in the seemingly transitory, and fleetingness in the seemingly permanent. Two poems in particular explore the connections between useless things—ugly landscapes, obsolete colloquialisms—and poetic value.

In “Clabberbabble,” Ammons investigates the evolution of colloquial language, wistfully pointing out the replacement of certain agrarian referents by technological ones. An earlier poem, “Conserving the Magnitude of Uselessness,” is a reflection on features of landscape that might be considered useless—valuable to no one except poets. In the poem, Ammons suggests that uselessness is what makes these landscapes timeless and worth preservation. A compelling poem, Ammons suggests, has its roots in grand useless things; but language, poetry’s vehicle, changes inevitably to match what we find useful in a given age. The two poems form an interesting juxtaposition: language is dependent on the colloquialisms created by fast-paced technological change, and at the same time draws energy from things we can’t use: glacial deposits, wind between rocks, “brush oak on a sharp slope.” Both poems also have interesting implications for how we think about environmental and historical conservation. These debates often center on use—whether a national monument, for example, will bring revenue to a local community. To celebrate uselessness is a reminder of the tenuous and complex link between use and value.

The delightfully titled “Clabberbabble” relishes out-of-date language. Ammons doesn’t tiptoe around the poem’s central argument. “How usage changes usage,” he begins, emphasizing the word’s double sense: the use of a phrase, and the things we use in daily life. His first example of changing usage: “with so many people / in the cities, and so few geese, nobody is / silly as a goose anymore.” Immediately after marking the expression as out-of-use, Ammons goes on to use it. Playfully and imaginatively, he then introduces another that’s even less familiar to modern ears:

looks like something the w has been left out of:
so unexpected; in fact, silly as a goose: makes
me think of some English hamlet.

Though I had to look up “anserine” (it means, essentially, silly and goose-like), Ammons manages to make the word meaningful even for someone who doesn’t know its definition. The old-timey, out-of-fashion word isn’t just a relic: instead, it generates a poem. But this generation is bittersweet: the word only conjures up images of the past. As Ammons writes, “animals were television then, so much time to / learn the ways of geese and time to dream / a gooseless world in no need of tending.” What makes the poem powerful is that it doesn’t veer into saccharine nostalgia: it doesn’t claim that a goose-filled world was better than our current gooseless one. Instead, Ammons suggests that evolution of language—and lifestyle—is inevitable. The work of the poet isn’t necessarily to venerate old colloquialisms, but to record them. This mixture of obsolete (anserine, silly as a goose) and new (“now, it’s video and digital and Internet”) is what makes language vivid. It’s what builds and expands the range of language as a whole.

But if “Clabberbabble” suggests that language’s evolution sustains poetry, “Conserving the Magnitude of Uselessness” celebrates changelessness. Where the tone of “Clabberbabble” casts change as inevitable, “Conserving the Magnitude of Uselessness” is mostly reverent and urgent, though still not sentimental. It’s not a pastoral ode; the natural features Ammons describes are not beautiful, nor significant:

Why should we care about “spits of glitter in lowgrade ore” or “incalculable, irremovable water” if they’re “merely tiresome”? Because they’ll outlast us. The poem ends: “nothing useful is of lasting value: / dry wind only is still talking among the oldest stones.”

Interesting that the wind isn’t whistling, or whooshing, or doing any of the other onomatopoeic things wind does: it’s talking. The poets, by contrast, are yelping and hooting, “rank as weeds themselves.” This reversal suggests the limits of poetic language—that even if poetry takes useless, forbidding natural elements as its subject, the dry wind will still be there longer. Where “Clabberbabble” demonstrates language’s capacity to transform, resurrect, and form fresh combinations, this earlier poem shows language’s shortcomings in the face of the “oldest stones.”

The poem celebrates the objects that are “not worth the work / of having” but that are worth preserving. Examples include “precious stones too poorly surrounded for harvest” and “the irreparable desert” and “all things / crusty or billowy with indifference.” It’s the fact that we’re unable to extract anything from these places that makes them both “tiresome” and worth keeping around.

When read together, these poems suggest a powerful way of writing about nature and thinking about usefulness. We have no other tool than constantly evolving language to write about solid, eternal things. We may briefly animate ancient landscapes with fresh colloquialisms, but even the freshest combinations will be insufficient and transitory. Still, as Ammons suggests, this mismatch is what generates poetry: constantly trying to find language to convey what we see, and inventing what’s not already there.