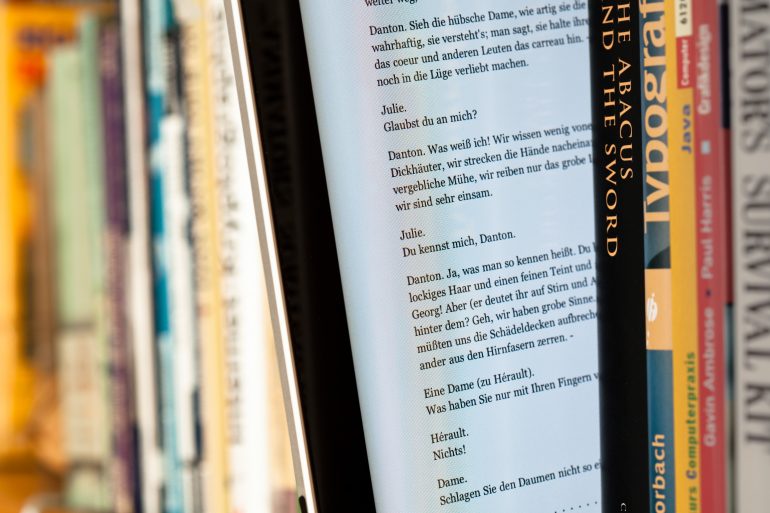 Imagine being cut off from more than ninety percent of the world’s printed material. According to the nonprofit World Blind Union, that’s the case for people with visual impairments.

There are plenty of things that can be done to make books more accessible to those with visual and other disabilities. Those with learning disabilities may benefit from the easy read format, which involves thoughtful use of pictures, simple language, and very clear layout. Those with cognitive impairments may appreciate a language system like Makaton, which supplements speech with (gestured) signs and (drawn) symbols.

Systems like these call for text to be designed with disabled readers in mind. But, of course, there are also ways to translate conventional printed matter into an accessible format (and vice versa). Braille is one of the best-known examples. There are also large-print books for people with reduced vision, and audio books are an example of a book form that’s useful to both people with and without limited vision. As for those with dyslexia, a simple step that makes reading easier is using a sans serif font, notably Helvetica or Arial.

But the measures don’t end there. While it’s common to bemoan the decline of the printed book, here’s one very good reason to laud the rise of the e-book: its ability to reach readers with varied needs.

As people with print disabilities form very diverse groups, one advantage of digital formats and e-readers is their customizability. Want more generous line spacing, as may be true of some readers with cognitive disabilities? Keen to change the color of text or the background to make the contrast work better for people with visual impairments? Interested in toggling between fonts to find one that’s dyslexia-friendly? It’s simple to do all these things with an e-reader.

More advanced are refreshable braille displays, which can instantly translate text into braille form, using a compatible device with plastic pins. And mouth-operated controls allow people with mobility impairments to turn pages, among other things, while reading digital texts.

Of course, the technology is only one piece of the puzzle. Another is economics. This isn’t just about the costs of specialized equipment; the intellectual property backbone of e-books can itself limit access. For instance, publishers have restricted text-to-speech functionality on popular e-readers, citing copyright infringement. This has made it harder for, say, a blind person to download an e-book and press a few buttons to listen to the book read aloud.

And those special features mentioned earlier, like the ability to change the font, color, and size of text? Digital rights management means that those functions built into a digital file may be lost when a company converts an accessible format into its own unique format. Intellectual property proponents can talk about copyright breaches; on the flip side, human rights advocates point to breaches of the right to information.

There are some promising signs. The Australian Parliament is now considering a bill that would relax copyright restrictions for the sake of people with disabilities. This would enshrine into Australian law some of its obligations under the Marrakesh Treaty, the second international treaty focused on people with disabilities, which came into effect in September 2016. Countries ratifying the treaty allow disabled people, as well as organizations representing them, to share copyrighted publications without obtaining permission from the copyright holder first. While the treaty is a positive step forward, it’s been ratified by fewer than twenty-six countries. The US is not one of these; nor is any European country.

Even apart from high-income countries resisting copyright leniency, technological developments may be of limited benefit to the residents of low-income countries. Richard Orme is the Chief Executive of the DAISY Consortium, a network dedicated to accessible publishing. Orme commented in a talk at the London Book Fair on March 16th that “most people with disabilities live in the developing world,” and they’re very underserved by accessible books.

These omissions should be seen for what they are: violations of rights. After all, the UN Convention on the Rights of Persons with Disabilities has been ratified by nearly every country in the world (the US is one of the few holdouts). Article 21 of this international agreement stipulates that countries should “take all appropriate measures to ensure that persons with disabilities can exercise the right to freedom of expression and opinion, including the freedom to seek, receive and impart information and ideas on an equal basis with others and through all forms of communication of their choice.”

Clearly, we aren’t fully meeting this obligation yet.