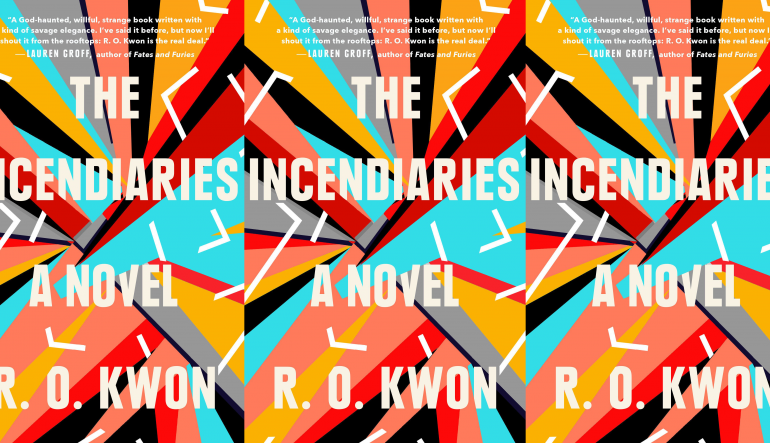 R. O. Kwon’s stunning debut novel, The Incendiaries, starts with an explosion, and the novel, in its investigation of grief and spirituality and a searching for meaning, carries the impact of that explosion throughout its 210 pages. This slim and concise novel is a work that always feels tightly coiled, even as we cycle through three major characters and move in time through two years. The book generates considerable momentum through its short chapters and often gorgeous language, and through the always present search for understanding. It is a difficult book to put down, one whose images and ideas remain long after the read.

Following the opening, the novel moves back in time and traces the events of the two years leading up to the explosion at the fictional Noxhurst, located in New York State near the Hudson River. Will Kendall, a Bible school dropout, has enrolled at Edwards College where he meets and begins dating Phoebe Lin early in their first academic year. Phoebe, a child pianist, is still reeling from the death of her mother in an auto accident, and part of her coping mechanism has meant retreating from the world of music. The third major character, John Leal, is a spiritual leader with a hazy past, and he is intent on bringing Phoebe into his congregation.

The novel begins and ends with Will, and it really is his book, as he attempts to understand his relationship with Phoebe and hers with John Leal. Short chapters cycle between Will, Leal, and Phoebe, always in that order. Will narrates the events of the two years chronologically, leading up to and then beyond the explosion. From John Leal, we learn something of his backstory but—increasingly, as the novel progresses—we are also taught his spiritual beliefs. Phoebe’s sections fill in her past, but she also narrates the present, yet she is always lagging behind the storyline we learn from Will. Secrets, particularly those that we keep from our closest friends and confidantes, are at the very heart of this novel and fill in the gaps between the three characters.

The key to the way the novel is told is that both John Leal’s and Phoebe’s sections are, in fact, narrated by Will, so the entire book is through his lens. He acts, essentially, as the stand-in for the reader, the outsider trying to make sense of it all. Both Phoebe and John Leal are elusive; we see them in bits and pieces. Late in the book, when Will and Phoebe have broken up, he sees her from afar on campus: “She was crossing the quadrangle with John Leal, lit up then extinguished in pools of light.” It is as though Phoebe and Leal are always a step ahead, just out of our reach.

Kwon is clearly fascinated by spirituality, and by what causes some people to search for meaning within organized religion and for others to leave their faith. Will had become a teenage evangelist who had hoped to save his parents and did believe, in fact, that he had saved his mother by convincing her to be baptized as well. Phoebe, on the other hand, is burdened with grief and by the belief that she caused her mother’s death. This twinning and doubling is seen throughout the novel, in both small and large ways. By having Phoebe’s narration of events lag behind Will’s, we often see events unfold twice, the second recounting a prism of sorts, with space between the two narratives.

This connection to time and to the relationship between the past and the present is of interest as well. Will thinks: “Time, I’d learned, was believed to be less sequential than it felt. It could spiral; it frilled. It might well halt.” Kwon investigates this on the sentence level as well, with the present and past tense often eliding. Although Will is telling the story of the past, the present telling moment interjects itself, and we see that, for him, the past is more alive than the present, causing the tenses to switch places. In considering the truth of the story of Phoebe and Leal, Will thinks: “What Phoebe said gets spliced with his future inventions. I strain to pull them apart. I fail. John Leal intrudes even here, as I walk with Phoebe along the wet, short grass.”

And Kwon also manages to create first-person voices out of a third-person framework, a sleight of hand that works wonderfully well. Even though Will is narrating, Phoebe’s chapters quickly slip into Phoebe’s voice:

I collided into a truck, she’d have said. I’m trying to imagine it: Phoebe, sitting with the group again, legs pulled in. Posture like a ball, a full-bodied fist. The others in a circle, staring while she exposes her life.

The truck driver broke his leg, Phoebe said. I wasn’t hurt. My mother absorbed all the impact.

There are even moments in Phoebe’s sections that slip into her mother’s voice. Again, we see Kwon’s ability to create this tightly coiled structure on every level of this novel.

This is a novel of ideas, one that warrants multiple reads to truly think through those that Kwon is positing. But it is her imagination and language that enables this novel to soar. Each sentence feels tight and close to perfect; never is there a wasted word. Will often reflects on his ability to tell this story, and on his relationship to the truth. He covers up his personal history with an invented past, and we feel the joy in creating a fiction:

I cut the strings. I had the balloonatic’s glee. Timelines cracked, shifted; my father pulled his emptied seat to the table. My mother’s little rental house sailed south from dull, meth-addled Carmenita to the hills of Los Angeles, expanding mid-flight into an open villa with the kind of misshapen pool no one but the rich would have. It lit up at night. I swam in its blue fire.

This imagistic prose allows us to see the characters clearly, both what they are seeing and what they are thinking and feeling. The underlying current of storytelling, of revision, of creating a fiction from facts, carries through the whole novel and creates a fascinating sub-thread of ideas.

There were moments when I had trouble seeing and always believing Will and Phoebe as underclassmen. While they both had experiences which certainly would have matured them beyond their years, I often perceived them to be out of college, in graduate school, perhaps, or in their late twenties. But that is a small quibble with such a fascinating book by a writer who is certain to have a long and wonderful career. This is a novel that explores important ideas—spirituality, grief, love—but also fully examines the angst at the heart of our present moment and does so in prose that haunts and transcends.