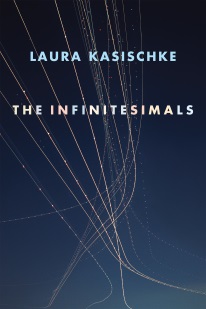 Imagine a strange land where tumors that resemble “terrible frogs,” a man with an “unbuttoned” face, and an ever-returning sea beast dwell, and where motherhood is a “grand opera staged in a cave.” This is The Infinitesimals by author Laura Kasischke, her ninth poetry collection (in addition to nine novels), which was published by Copper Canyon Press (July 2014). Here, illness and mortality assume anthropomorphic contours, wherein the loss of Kasischke’s mother, for instance, becomes “birds on the other side of . . . binoculars” who stare her (and us) down.

As with Space, In Chains (2011), which won the National Book Critics Circle Award, Kasischke’s latest collection, tight with her distinguishing concision and strong lyricism, continues to invent and explore new terrains. Never over-the-top with her surrealism, Kasischke aims to excavate the “infinitesimal” in this collection, which seventeenth century philosopher George Berkley, in the epigraph, defines as “the ghosts of departed quantities.” Put in another way, she challenges us to consider what we cannot see, explain, or portend. In the “The Second Trumpet,” for example, the speaker reflects on how tragedy creeps in without warning: “Each time, expecting trumpets, I/received silence instead.”

Throughout, Kasischke acknowledges how mortality can alarm and confound us, but, no matter how hard we look away, must settle in us, as when she writes:

I grew older, and had to begin
to dig my own
pitiful little
hole with a teaspoon
to get them out again. (“Of the Dead White Men,” 93-94)

But Kasischke also importantly reminds us that she is not alone in her probing. For eons, dead, white, and male poets (her words), scientists, and philosophers have sought answers to these eternal questions, as the following excerpt also exemplifies:

Who are these elders
in their white robes? These
females and males? These
royals and ruled? Who

are these children? This woman beside me? This
magician, this priest, this meat in this soup, this
utter conundrum—what

is it and where did it come from?

O Kepler, O Newton, O Darwin, O Driesch.
What machinery all night, and all day
what dream? (“Who,” 7)

But perhaps one of the most defining characteristics of Kasischke’s collection is her anaphoric refrains; after addressing her subject, Kasischke investigates possibilities lying behind the initial image by listing more images (usually metaphors) that turn it on its head. As images accrete, Kasischke leads us down paths to new discoveries of what lies at the essence of illness and mortality. And, as if unsatisfied with one answer by the end of a poem, Kasischke reemploys them within new contexts throughout the collection, so that the reader engages in a continual discovery.

A “bestial form,” for example, reappears throughout the collection. In the opening poem, “You’ve Come Back to Me,” it is “A small thing crawling toward me/across this dark lawn. Bright/eyes the only thing I’m sure I see . . . smaller this time than the stars.” At other times, Kasischke characterizes the beast as “your dark omnipresence now as it stretches/from one edge of the everything to the next,” (“That Men Should Kill One Another) or as it “struggled under water,/bound by ropes” as two lovers row a boat, a boy reeling in fish (“At the End of the Text, a Small Bestial Form”). And then, in “The Woman Escapes,” Kasischke explains how cliché but correct the image of a wolf howling at the moon to describe the ineffable loss of a parent:

you can pull the plug
and still
I will
love
my husband, my son
my ugly
death
and my mangy, un-
domesticated pet
at the crest
of that wave. (48-52)

And, four different poems, all titled “Beast of the Sea,” appear throughout the collection, as if to remind the reader of inevitable possibility behind the everyday. Indeed, Kasischke gives readers the sense that, among images of everyday, domestic life—piles of unfolded laundry, the receptionist at the doctor’s office and the sink full of hair—an unfamiliar and strange beast writhes beneath. As if to punctuate the uncertainty of the journey, each of the four sections of the book is named after the title of a poem located in a different section of the book. With Kasischke, you never know where you might end up—the end may very well appear “at the beginning/in the middle again” (“Perspective”).

Sarah Katz is a writer studying poetry in the MFA program at American University in Washington, DC. Her poetry and short fiction have been published at jmww, Deaf Lit Extravaganza, and From the Depths, among others. She works at the Association of Writers and Writing Programs as the Publications Assistant of The Writer’s Chronicle, and lives in Fairfax, Virginia with her husband.