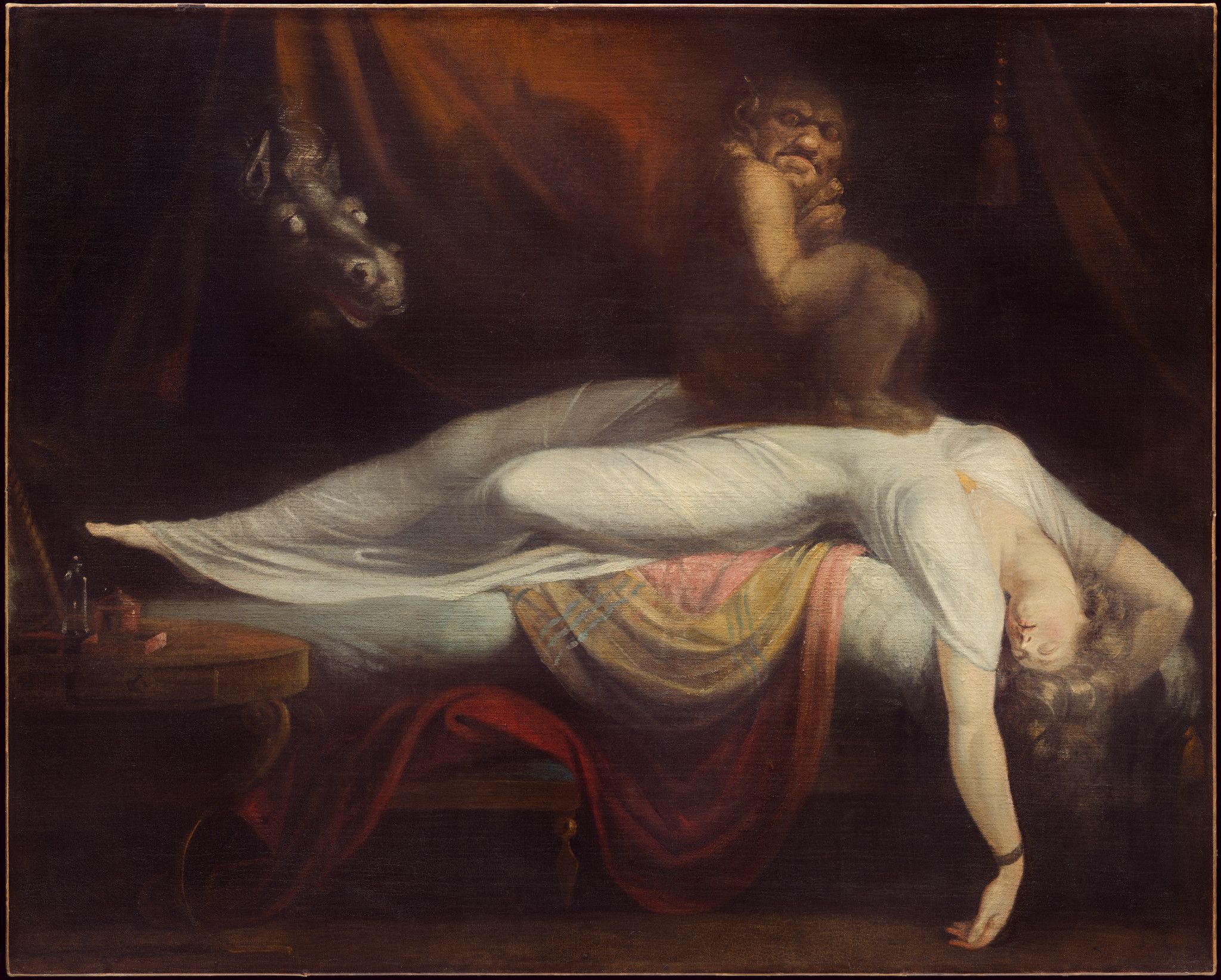 “I have gre[a]t wonder, b[y] this light,” begins the narrator of medieval poet Geoffrey Chaucer’s Book of the Duchess, “How that I lyve, for day [and] nyght / I may n[o]t sleep . . . .” So tormented is he by his insomnia—which he has horrifyingly endured for eight long years—that he has “fe[el]nge in nothing.” This prolonged sleeplessness, he says, is against “kynde,” against nature. No “e[a]rthly creature” can endure it. Lack of sleep changes our disposition; it deprives us of the will to live and the capacity to respond emotionally or with any life at all to the world around us.

Over the past several years, popular interest has been captured by medieval sleep patterns. This interest is a product of the collision between the wellness movement’s fascination with the relationship between sleep and health and new historical research into what sleep practices looked like in the premodern world. And it has resulted in a flurry of articles asking the question if the medieval practice of “second sleep” could fix modern insomnia.

Historian A. Roger Ekirch first spurred interest in second sleep with his 2006 book, At Day’s Close: Night in Times Past. As Ekirch describes it, medieval practitioners would sleep for a few hours, wake after midnight to enjoy a brief period of wakefulness, and then return to sleep. Tracking references to second sleep through a wide range of sources, Ekirch goes so far as to suggest that this sleep pattern might have been a (if not the) natural sleep pattern in prehistoric times before the advent of artificial light. Part of the appeal of second sleep for the wellness crowd has been that some studies suggest that the wakeful period in second sleep has a unique endocrinology that affects hormone production and induces a state similar to meditation. At their best, contemporary essays treat second sleep as a touchstone for considering divergent forms of sleep; at their worst, they treat second sleep as a “how to guide,” an atavistic wellness ritual. If we return to this earlier form of sleep, they suggest, then we will sleep better and, consequently, be better, and healthier, versions of ourselves.

Somewhat perversely, this is an essay not on second sleep but on medieval insomnia. An enormously popular trope in medieval texts across a number of genres—from poetry to autobiography to philosophy—insomnia was everywhere in medieval texts. And, as the lines from Chaucer suggest, it was frequently excruciating. Margery Kempe, the first autobiographer to write in English, was tormented by visions of devils that kept her awake at night after the birth of a child. John Gower, Chaucer’s close contemporary, makes age-induced, frustrated insomnia into a central feature of his main character, Amans, in the Confessio Amantis. What these examples of medieval insomnia reveal is a distinctly medieval anxiety about sleep; or, rather, what they reveal is that insomnia in medieval texts was often a powerful literary device for investigating cultural and individual anxieties. Thinking with insomniacs allowed medieval writers a valuable space to explore their deepest fears, hopes, and worries.

But how—and why—was the exploration of medieval insomnia so productive? The answer is partly generic. The literary space of the medieval insomniac coincides with that of an important medieval literary genre called the dream vision. Dream visions were narratively complex works in which a dreamer was propelled in their sleep through an often symbolically dense dreamscape populated by allegorical figures and surrealist landscapes. In these dream visions, the dreamer would often engage in philosophically complex work—imagining, as the writer and philosopher Christine de Pizan did, what a city might look like when populated only by women, or, as English poet William Langland did, staging complex allegorical investigations into social and religious reform. Insomnia wasn’t the sole propulsion into the world of the dream vision. It was, however, a common one, with authors frequently pairing the underlying causes for the narrator’s insomnia with the subject of the dream vision.

One of the consequences of this is that medieval dream visions also offer a glimpse into various, often comedic, accounts of the desperate ends to which people might go to cure insomnia: fall asleep on top of Roman poetry (Chaucer’s Book of the Duchess); be scolded by an old man in a field (Thomas Hoccleve’s Regiment of Princes); pray to Morpheus, god of sleep (Jean Froissart’s Paradys d’Amours); fall into a trance while thinking about your long-lost love (James I’s Kingis Quair). To these we might also add recommendations from philosophical and medical treatises: visit the tomb of William of Norwich, hang out with St. Bartholomew’s relics, listen to soothing sounds like water trickling over shells, have a nice bath. None of these are as eye-catching or, in many cases, as achievable as pursuing second sleep—St. Bartholomew’s relics are no longer in Yarmouth anyway—making them less likely to be taken up by contemporary wellness culture. These cures, however, do reveal what any modern insomniac knows (and what I certainly know when I find myself awake again at 3 a.m.): to grapple with insomnia is often to grapple with one’s own fears and anxieties.

This may seem an obvious thing to say—that our fears and worries make us sleepless—but the ways it plays out in medieval dream visions are anything but simple. These medieval insomnia narratives suggest that the insomniac, pushed to their limit and then suddenly catapulted into a dream-rich sleep, gains new insights into the various social or poetic problems that caused their sleeplessness because of this sleeplessness. Insomnia becomes not a critical hurdle to be overcome, but a crucial element in the process of gaining insight.

Take the Book of the Duchess. The narrator describes feeling listless, pushed to the very limits of life and existence. He cannot tell why he cannot sleep, and he is tormented by not only a lack of feeling but also “fantasies” that move through his mind. So far gone is he that when he picks up a collection of stories by the Roman poet Ovid and reads the story of Ceyx, a king who dies in a shipwreck, and Alcyone, his queen who dies by suicide when she learns of his death, the narrator mistakes their tragic love story for a sort of instruction manual for contacting the god of sleep. When the narrator finally falls asleep on top of Ovid, exhausted, he subsequently enters into a strange and difficult dream about a Black Knight grieving the sudden death of his beloved. It is in the push and pull of both insomniac musings and dream encounters that the narrator learns something valuable: how to recognize grief and loss when he sees them. Once unable to recognize romantic loss in a book of poetry, in the final moments of the dream vision the narrator learns what grief is. His final haunting words to the grieving Black Knight—“Is that youre los? B[y] God, [it is] routhe”—sum up the terrible and painful nature of loss that cannot be corrected, only mourned. Routhe, which refers to a deep sorrow but also connotes necessary empathy, suggests that the narrator has learned to see sorrow and to feel with others in response to it. That this process also cures his insomnia has led some critics to consider that perhaps this was the narrator’s (unacknowledged) problem all along—that he too had lost a love and failed to recognize and mourn it. Only in recognizing and processing grief with another is his sleep restored.

I’m not suggesting here that we treat medieval insomnia narratives as guides for how to harness insomnia for greater wisdom or poetic creativity. Instead I want to gesture to what medieval insomnia narratives try to grapple with: what it means to live with and accept fear and anxiety. Chaucer’s poem, for all that it is a lengthy meditation on grief, is amazingly non-didactic or condescending about the inherent challenge of this process. This is in many ways a feature of this genre of insomniac dream visions. They offer no (sincere) advice on fixing grief or insomnia, only a recognition of the painful reality of living with both. This lack of didacticism suggests what’s so fundamentally skewed about our current cultural fascination with second sleep. In looking to the past, hopes pinned on second sleep are often looking to put off the anxieties of the present. If we go back to a pattern of the past, we believe, when people could sleep, or at least slept differently, then we don’t have to confront the reality of our own individual and cultural fears and anxieties—our own lack of sleep. But that isn’t the way anxiety works, and it’s not the way you fix sleep. As any medieval insomniac would tell you, you can’t escape bad sleep by retreating into the past.

Tags:Book of the Duchess, Geoffrey Chaucer