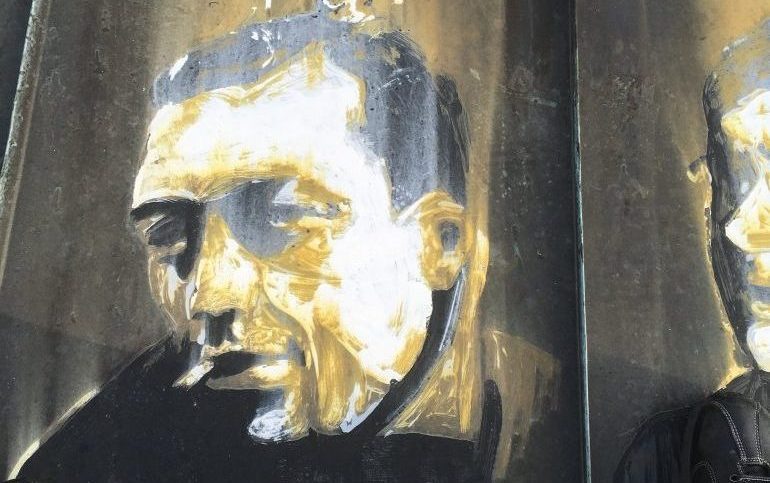 The three of us—my son, my son’s violin teacher and I—are all looking at a score with three sharps jumping across the treble staff. The teacher asks, What key are we in? After hearing a guess or two, the teacher raises the violin and plays the A-major scale. I wonder about the connection between the sound of the violin as the bow moves across the strings in this particular pattern and those symbols, directing in silence from the distance of the staff. The thought reminds me of an anecdote from James Wood’s 2015 memoir, The Nearest Thing to Life, in which he recounts the time he heard pianist Alfred Brendel give a lecture on Beethoven’s piano sonatas. Wood was struck by the difference between Brendel’s “inaudible Viennese mumbling” and the times he turned to quote passages on the piano. While playing, “he became not a quoter but a performer, not merely a critic, but an artist-critic.” The scene for Wood has come to stand for a form of excellence in criticism—where the critic is not simply talking about the subject (the forgettable spoken portion of Brendel’s presentation), but rather speaking, writing, or, in this case, playing through the subject (the passages that, coming to life in sound, become a creative act in itself). Elsewhere, Wood terms this “writer’s criticism”—an endeavor that has, after all, existed for much longer than academic literary and theoretical criticisms of the late nineteenth-century. What might these ideas mean in the context of Wood’s work as a novelist? If a critic can write through a text, in what sense, then, does the novelist write through life?

Upstate, Wood’s 2018 novel set in Saratoga Springs, New York, is about the spoken and the unspoken between father and adult daughter. Among the critics who have weighed in, Ron Charles of the Washington Post calls it an affectionate, “slim book with a tiny cast doing little in a remote place,” composed deliberately as an antidote to the novels written in the hysterical realist mode. In the Wall Street Journal, Sam Sacks calls Upstate’s main character “a bit boring,” whose observations of Manhattan as “heaven and hell combined, infernal but glittering with lights” are touristy and unoriginal. A glance at Wood’s 2000 essay, “Human, All Too Inhuman,” in which he coined the term “hysterical realism,” provides a fitting response: “Bright lights are taken as evidence of habitation.” If we read with the idea that the most important actions are internal, and that external landscape is no match for its internal counterpart, Upstate accomplishes much. Given the intimacy of rearing another human being from her birth, to what extent is it possible to fathom her once she has become an adult?

Alan, a remarried widower and successful businessman from northern England, is called to check on his eldest daughter Vanessa, now a professor of philosophy at Skidmore College, who is reportedly suffering from depression and who has, perhaps, begun to harm herself. Alan is accompanied by his younger daughter, Helen, whose life has in contrast followed a straightforward trajectory to success: she is a London-based record executive, married with young children, vivacious and earthy to Vanessa’s childless thrift. It is also evident that Van’s hipster boyfriend, Josh, younger than herself and often away for work, is not up to her level of devotion; Alan sees—to his consternation—that he is called there to, among other things, break the fall.

The characterization of Helen, who serves as Vanessa’s counterpoint, is telling. Helen is aware of the irony of being a successful executive in charge of broadcasting a way of living that wants to “tear down the Sony tower.” It is the unspoken agreement between herself, the recording industry, and the socioeconomic class she has joined that “everything existed to be made use of. ‘Life’ was conceived of as entirely pragmatic—work, office nonsense, commuting, relentless haste and fatigue, imperfect weekends, a bit of sleep: that was ‘the world’.” But this is not all: “Life was something else, too. It was endless loss: Mum.” Helen reflects—but, unlike her sister, does not dwell—upon the fact that there is no lasting protection from suffering. Her antidote? Children and rock and roll.

Vanessa’s suffering, invisible to all but for the cast she wears on her broken arm, is of a different texture. Josh describes her behavior as if “she was doing a kind of ironic voice-over to her own life.” But Jerry and Diane, Vanessa’s Evangelical neighbors who find her after she has fallen down the stairs, say that she was “in pretty bad shape” when they took her to the hospital; Alan learns that Vanessa has attended their church services more than once, ostensibly as an observer, and wept through them. In a moment that feels simultaneously forced and awkwardly moving to Alan, Jerry assures him that hers is a “spiritual sadness” that could only be healed in one way. Vanessa’s own story minimizes all of the above as a series of aberrations, and insists that her fall was accidental, nothing more.

The novel provides the reader with insight into both Vanessa’s motivations and the limitations of her father, sister, and lover by allowing a glimpse into Van’s early college life, which makes the platitude that the ideas one encounters in one’s early twenties are those that make the strongest and most lasting impressions seem perfectly true. The thinker Vanessa loved first was Camus—a philosopher outside the academy who, much like artist-critics, did not care to make the distinction between living and the life of the mind. The idea of the absurd, to Vanessa, was not something to be picked up, turned around in one’s hands with ironic detachment, and then set back down. What if, on the other hand, “it was hard to stop thinking about the brevity and meaninglessness of things? What if despair…kept on returning?” One might question, though Alan does not (he is, after all, a businessman interested in going into these things only as far as he must), why Vanessa takes the absurd as her premise. Why not start with Pangloss instead—another figure distant from the academy?

Despite her depression, optimism is present externally for Vanessa. Not only is she maintaining her teaching position, but she manages her classes with humor and calm authority. When Alan attends her first lecture of the semester, he fears that it somehow may turn out badly. But there she is, at the head of a small group of students, “in her smart ‘teaching clothes,’” joking about the cast upon her arm. She proceeds to outline a definition of philosophy as “a way of thinking that would ideally negotiate a modus vivendi between reflecting on life and living life.” Alan sits and tries to stay awake as she moves through Aristotle to Kant, to Weil and Singer, but only to reflect on the contrast between the professor at the lectern and the image of his daughter, “weeping like a child in church,” broken and alone at the bottom of the stairs. “If he described that person, that failed adult, to the students, not one of them would believe him.” It is the moment when the reader is brought close to the sunderings within a life—Helen’s music and her job; Vanessa’s life as an academic and as a philosopher; Alan’s role as a father who cannot protect his child from grieving.

Novels—Wood’s among them—have the unique capacity to show that the prosaic parts of life are necessary, for they are the gestures that enable the machinery of the world to continue. The other parts that appear to be incompatible with adult life—all forms of excess and resistance, defiance and disruption, questions without answers—must, too, find a place within the arc of the story. Taken together, it is not necessarily inevitable that one end with Camus; alternately, one may also hear in it the voice of Pangloss who says, in this best of all possible worlds, that if it were not for experience, you would not be here now, as you are.