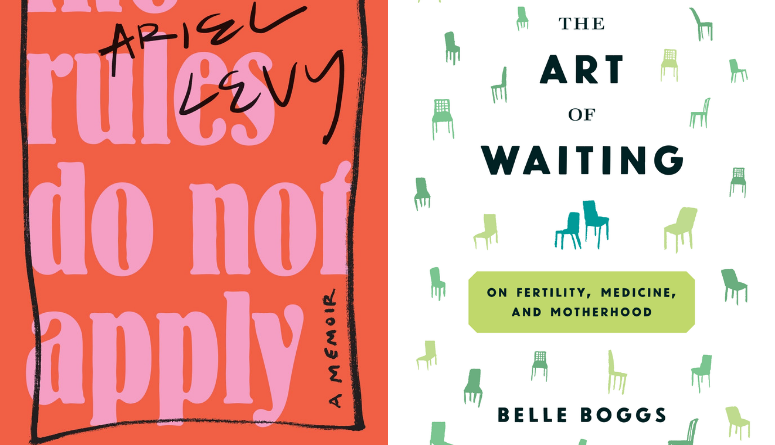 The childless woman is an image we all hold—she might be a career woman, living in a big city, barking orders at her assistant, or she might live with too many cats and too many books. Women who choose not to have children, can, of course, have rich and fulfilling lives. Books like Meghan Daum’s Selfish, Shallow, and Self-Absorbed: Sixteen Writers on the Decision Not to Have Children explore this choice, and its ramifications, in detail.

On the other hand, so many recent books center motherhood, from Jenny Offill’s Dpt. of Speculation and Meaghan O’Connell’s And Now We Have Everything to Sheila Heti’s Motherhood and Maggie Nelson’s The Argonauts. Most of these books place motherhood in opposition to a writing career, and yet the books exist thanks to a growing community of women who have treated motherhood as a subject worthy of great literature. We see domestic scenes of delight and frustration, read of women who plan or do not plan their pregnancies—women stuck at home with babies, or trying to leave home with babies, who recognize others clinging to sanity while raising a baby who is completely reliant on them. As Lauren Elkin wrote in The Paris Review, “Motherhood is the new friendship, you might say. These are books that are putting motherhood on the map, literarily speaking, arguing forcefully, through their very existence, that it is a state worth reading about for anyone, parent or not.”

These two sides of the motherhood coin leave out one-eighth of the childbearing-aged population (a group in which I currently find myself): those who long for a baby and yet cannot seem to get or stay pregnant. Not being able to have a baby naturally makes each month feel like mourning someone who has gone missing. In my reproductive endocrinologist’s office, an upscale clinic with fluorescent lighting and soft-voiced nurses, we collect numbers that tell a story about my body. We measure hormones and follicles, count days before I self-administer shots or take a pregnancy test. This journey, an increasingly common reality for so many women, can’t find its literary foothold. Where are all the books about miscarriage and assisted reproduction and about experiencing the loss of something you never had to begin with?

Works by Belle Boggs and Ariel Levy are the only answers I’ve yet found to this question. In her 2016 collection of essays about undergoing a successful in vitro fertilization (IVF) treatment, Boggs meditates on the complications of this sense of loss and her own fertility journey. “By now we were painfully aware of the way our rituals and traditions might appear to other people, continuously reminded that our life together did not resemble the lives of our parents at this age,” she writes. “Increasingly our life was less and less like the lives of our married friends who had entered a new and somewhat exclusive world of playdates and birthday parties and bedtimes.” The falling out of sync with your family and friends is familiar to all of us regardless of our reproductive choices or experiences—that realization that your parents were married by your age, or your friends seem to have already bought a house while you’re still struggling to pay off student loans. But the body’s failure to stick to a timeline feels like the rupture is within you.

Boggs writes about IVF as a social issue, as well—its commonality among non-heterosexual couples, for example, or the injustice of its expense making assisted reproduction only available to the wealthiest couples, even though infertility disproportionately affects the poor, minorities, and the less educated. It also affects men and women in equal numbers, yet it still seems like a woman’s problem. By widening her lens beyond her own personal experience, we see the ways in which infertility and its treatment expose larger injustices, providing new ways to consider a highly personal challenge.

“The problem with infertility,” writes Boggs, “is that it is not a patient, serene kind of waiting, not a simple delay in your plans; it happens for many of us in the context of consuming struggle, staggering expense, devastating loss. It’s five (or eight, or ten) years of trying and failing, which erodes any feelings of confidence or anticipation of a positive outcome.” Boggs herself wrote this book after her IVF’s successful conclusion, once she gotten the happy ending for which she’d put her life on pause for five years.

A year later, Ariel Levy’s memoir The Rules Do Not Apply tackled a tragedy in her journey towards motherhood: that of the birth of her son after only nineteen weeks, alone, in a hotel room in Mongolia where she was on assignment for The New Yorker. She sees her son, who “was translucent and pink and very, very small, but he was flawless. His lovely lips were opening and closing, opening and closing, swallowing the new world. For a length of time I cannot delineate, I sat there, awestruck, transfixed.” She calls for help, and then takes a picture of her baby, to remember the few moments of her life where she was someone’s mother. In the months following this loss, she takes it out to show people, to find witnesses to her motherhood, now only a memory.

Levy was thirty-eight when her baby died, and soon afterwards got divorced, the pain of the loss too great for her marriage to sustain. The book focuses on the scripts our culture writes for women, and explores what happens when they work rather than get married young, travel, write, or experience other miracles of life before the miracle of life. And yet, the loss of her baby, and the knowledge that she will have only been a mother for a few minutes of her life, is the center of her grief—the lesson of thinking she is somehow above the rules. “The truth is,” she writes, “the ten or twenty minutes I was somebody’s mother were black magic. There is nothing I would trade them for. There is no place I would rather have seen.”

The extraordinary difficulty some women have with their reproduction should be the material of great literature—the tension, grief, and suspense of success or failure. And yet, it remains off-limits, a private shame and heartbreak, too unending, perhaps, to make into palatable art. The Art of Waiting and The Rules Do Not Apply bring warmth and life to a topic often heavy with defeat or clinical coldness. What Boggs and Levy provide is a complication of the motherhood narrative, a way to say, there are so many ways to have a normal body, so many ways to be a mother, or not, depending on the lives we choose.

Tags:Ariel Levy, Belle Boggs, The Art of Waiting, The Rules Do Not Apply