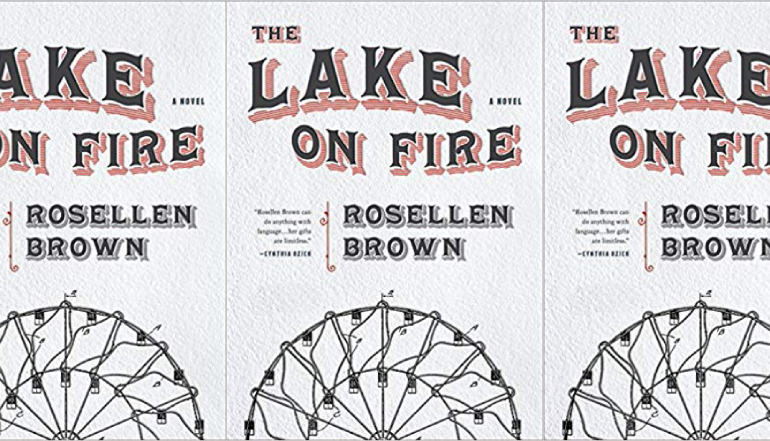 In response to her novel, The Lake on Fire, Rosellen Brown has been compared to both Jane Austen and Tillie Olsen. After reading it, I can see the disparate strands of each. In fact, it’s almost like Tillie Olsen got her hands on an early copy of Mansfield Park and said, “Come now, Jane, you know this would never work in the real world.”

But The Lake on Fire is not about prim, English young women with lively eyes. It’s about the clash between wealth and labor in Chicago’s Gilded Age. It’s also about Jewish emigrant siblings, Chaya-Libbe and Asher, living on a farm in Wisconsin until they run away and find themselves in a city that doesn’t want them.

Brown’s first novel in almost twenty years begins as the Shaderowsky family arrives in America. “Here we will take care of ourselves, eating from our own crops, owing nothing,” their idealistic father says. But there’s a problem. They know nothing about farming. Their efforts to live off the land might be funny—the buildings are lopsided and leaky, the chickens avoid the coop—if it weren’t for all the starvation and their earnest attempts to make the farm work. When a grotesque, young Jewish man shows up at the farm, Chaya’s parents try to make her marry him. “I am not yours to give away,” she tells them in a letter and runs off to Chicago, her brother Asher joining her.

As Chicago prepares for the Columbian Exposition, the siblings find work in the city: Chaya, rolling cigars; the precocious Asher, pick-pocketing on the streets in the manner of Dickens’s Artful Dodger—except that he gives away most of what he takes. The Austen-like storyline comes in when Chaya-Libbe meets a tall, blue-eyed stranger named Gregory at the train station. We don’t know it yet, but he happens to be the socialist son of one of the city’s wealthiest families.

As they depart the train station and see the city for the first time, the novel separates into back and forth narratives, one from Chaya’s point of view and the other from Asher’s. These different sections break the novel into micro and macro stories. Chaya’s point of view seems the heart of the piece, while Asher’s gives us the story of the city and its workers. The narratives exist in conversation with one another, and at times, Asher’s chapters speak to concerns the reader has regarding Chaya’s storyline. For example, like him, I never trusted Gregory.

This dual narrative forces the reader to move between two modes of empathy: one of anxiety for Chaya’s strife, and the other, a nod to the more universal concerns we have for the poor, like workers who are treated unfairly, or large segments of the population living in filth. But despite the fun Brown has with Asher’s perspective—he spends a lot of time obsessing over words and language and his short chapters are told in quick staccato bursts—this is really Chaya’s story.

“We hope to make our fortune here,” she says to Gregory when they first meet. Yet when she does, she’s thrust out of the only Chicago society she knows and dropped into one where Gregory introduces her as “Ceil” because he thinks his family will have trouble pronouncing the foreign sounds in her name. Despite the historical backdrop, the novel’s most essential and most compelling questions revolve around Chaya-Libbe’s good fortune in meeting Gregory. He’s a Darcy-like character, willing to risk his family’s disapproval to be with her. But does she deserve her good fortune? How could she when there are so many in the city suffering?

In describing this suffering, Rosellen Brown’s prose shines. It is lucid, rhythmic and offers vivid descriptions of the city: its inhabitants are an “endless dark river of men—mostly men, rumpled and redolent,” its poor neighborhoods have “the lurch of piss and occasional vomit, of dead dog in the street and spoiled food in the kitchens,” the sweatshops smell of “perspiration … fish and fried food from lunch pails, the air dense with fabric finish, and the stink of scorch thick across it.” Especially during Asher’s sections, as he navigates the city dashing from street to street, we see Brown’s ability to not only recreate late 19th century Chicago, but recreate it with beautiful sentences.

Unlike the 2004 book Devil in the White City by Eric Larson, which glorifies the craft and workmanship that went into the Columbian Exposition, this novel shows us the darker side, and in some ways, asks us to pick sides. When Chaya sees the artistic exhibitions at the World’s Fair, she cringes and shows her distaste to Gregory’s family. Questions arise about the luxuries of those who create and enjoy art while others suffer. Since the 2016 election, I’ve heard quite a few artists trying to work through this same dilemma. And it’s an interesting question for a novel to ask of a reader. (While reading it, I kept thinking, I should be somewhere protesting something right now instead of lying in bed with this book.)

The novel begins by saying of Chaya-Libbe’s life, “The missing parts stayed missing.” Chaya shares her story, but seems to tell us, too, that the stories that matter most are the ones that aren’t shared. Then we have Asher’s perspective. “The Fair had had a heartbeat” he says when the World’s Fair is over. When the walkways and building materials from the Exposition sink into the swampland by Lake Michigan, if feels like a real death with “dry sections upthrust like something trying not to drown.” Even if it was never alive, it made Asher feel more alive. Yes, sometimes “the missing parts” stay missing. Like the hungry, those who yearn for justice in this world are rarely satisfied, the novel seems to tell us, but sometimes art can hold us off.