Home
»
Series
»
The Limits and Freedoms of Literary Regionalism: Defining Homeland in Sherman Alexie’s Stories of the Pacific Northwest 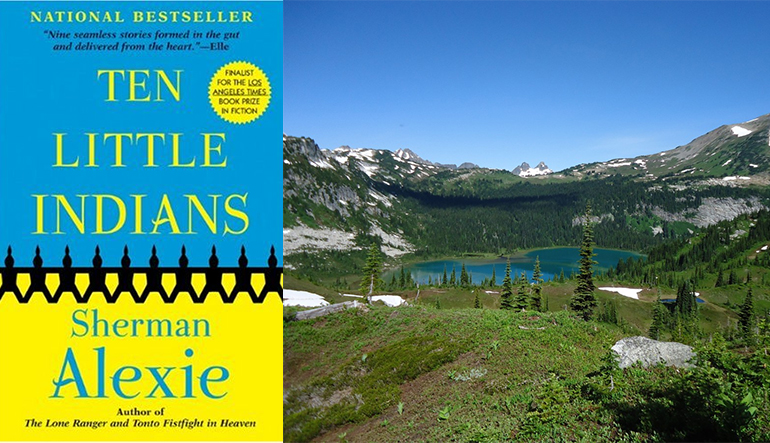 In literature, the Pacific Northwest feels somewhat neglected, almost as if the Cascade Mountains have divided it from the eastern literary scene to the point of obscurity. Similarly, the representation of Native Americans in fiction is aggressively limited, made worse by the caricatures they become in the hands of those not familiar enough to do them justice. Sherman Alexie, arguably the most recognized Native writer, has brought both visibility to his hometown and the home of his ancestry. Born in Spokane, Washington to a member of the Coeur d’Alene tribe, Alexie weaves decidedly non-universal narratives, choosing instead to celebrate the specificity of his people in Spokane and Seattle.

However, the multi-hyphenate writer’s 2004 short story collection Ten Little Indians contains nine stories, all set in Washington state, and are less focused on containing his characters to their Spokane-based reservations and instead on releasing them to the world. Alexie uses his literary mobility to move beyond his tribal land into the larger region of the Pacific Northwest, and brings his characters with him, creating greater visibility for Native Americans and accurate portrayals of their culture. In this way, he overturns Andrew Jackson’s Indian Removal Act of 1830; through catching the dreams of his people and repurposing them into stories of exploration and unlikely connection, Alexie redefines homeland from being land-based to a sense of belonging instead.

In the story “Do You Know Where I Am?” a young Native American couple navigates life outside of the reservations they descend from and create homes in each other as a result. Eager to move beyond their Indigenous identity and assimilate into the broader Washington landscape, they oscillate between two places that have made them who they are, together. “Sharon was Apache, and I was Spokane, but we practiced our tribal religions like we practiced Catholicism: We loved all of the ceremonies but thought they were pitiful cries to a disinterested god.” Alexie illustrates the tension between inherited and designed belonging: neither character can divorce themselves from their Native lineage, nor can they dismiss the connection they feel to Seattle at large, by way of their wealth and opportunity.

Even still, Alexie never allows his characters to forget their roots, forever complicating the idea of home. “We sprinted though a residential neighborhood, which may or may not have been a good idea for two brown kids, no matter how high our grade-point averages. But it felt good to run fast, and I dreamed about being a superhero.” The protagonist’s acknowledgment that his private school education and childhood spent in Seattle is not enough to protect him from the marker of his first home—his skin—is sobering. And on the heels of this realization, Alexie catapults him to a place even beyond the land that birthed him: into the sky, above both Washington and reservation, into a region all his own. Imagination is the tool that both threatens and binds the couple. Sharon’s mind wanders itself into an affair, an action only reality ultimately could end. But the imagination of a life together, a life of ceremonies without a god, is what caused the young couple to fall in love in the first place.

Sherman Alexie finds a way to make environments inside of environments—his brand of literary regionalism is both the world of the Pacific Northwest and the world of the Native identity inside of it. This nesting doll of setting ultimately allows him to dismantle stereotypes of Indigenous people by giving their spaces range. He shrinks Washington into a smaller region of community, based on shared experience and ancestry instead of mere zip code. Alexie subtly resettles Western land, this time by choice and not by force: through honoring the dead he gives power to his people in the present-day, choosing to define homeland by where one is most able to be visible, whether that be through might or innate majesty: “My mother didn’t call my father by name because she wanted the dead to stay dead; I wanted to learn magic and open a twenty-four-hour supermarket that sold resurrection and redemption.”

Most of “Do You Know Where I Am?” shows Native characters living outside of the stereotypes traditionally placed upon them, opting instead to assimilate to white, Pacific Northwestern culture. Even still, Alexie insists upon the omnipresence of the protagonist’s Native identity to remind the reader that land ownership and, therefore, the notion of home for Native Americans is complicated by the history of their organized deaths. Alexie’s character attempts to reverse this uneven assignment of regional rights (if you will) by dreaming of a building that sells “resurrection and redemption” to his people on their native land. Ultimately, this renegotiation of power serves as a way to both intellectually and physically reclaim home.