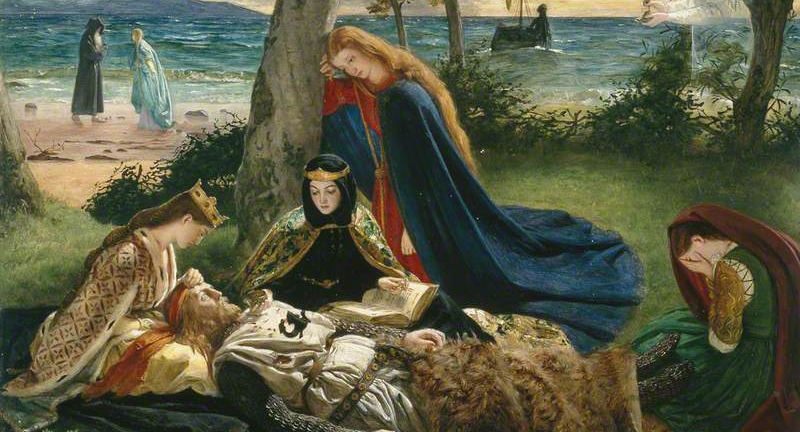 Few witches in literary history have been as influential—or as maligned—as Morgan le Fay. By turns either the healer-ruler of the mystical island of Avalon or the arch-villainess of Arthurian legend, for more than nine hundred years Morgan has shaped popular perceptions of witchcraft. She has been at the center of utopias that construct places of powerful connection among women, magic, and the natural world, and she has been the poster child in misogynist visions of women out of control, made dangerous by magic. To understand Morgan le Fay is thus to understand something of the nature of witches’ and witchcraft’s literary representation as a whole. And so, in honor of Morgan le Fay and the witches who have come both before and after her—those practicing and those just aspirationally witchy—I offer a brief literary history of Morgan le Fay.

The roots of Morgan le Fay’s history are a cloudy mixture of Celtic mythology and legend. She first appears in writing in the twelfth century but was likely based on much older figures from Celtic folklore and mythology. She has been linked to figures like the Morrígan, the “phantom queen” of Irish myth associated with battle and prophecy, and the mari-morgans of Breton folklore who, siren-like, lure sailors to their doom. The most direct influence, however, was likely Modron. Etymologically linked to Dea Matrona, the divine mother goddess of ancient Gaul, Modron was a divine figure in Welsh mythology connected to the court of King Arthur. In these Celtic stories, we can see glimmers of who Morgan le Fay would become: an otherworldly figure, a voice of death and prophecy, a divine figure of creation and creativity.

Morgan le Fay’s narrative began to crystallize in 1150 when it first appeared in writing in Geoffrey of Monmouth’s Vita Merlini. The Morgan of the Vita, or Life of Merlin, is a renowned healer and scholar, one of nine ethereal sisters living on the mystical island of Avalon. The best of the nine, Morgan is known for her beauty, skill in mathematics, and ability to shape-shift: “…that art is known to her by which she can change shape and cut the air on new wings in the manner of Dedalus. When she wishes, she is in Brist, Carnot, or Papie; when she wishes, she glides out of the air onto your lands.” In this translation by Emily Huber, Morgan’s powers are otherworldly and substantial, depicted as a form of art comparable to the creative force of Dedalus, the great inventor of Greek mythology. It is that capacity for art—not just the magical arts but also healing—that makes her essential to the story of Arthur. Morgan’s knowledge and power are the only thing that can restore a mortally wounded Arthur to health, and her skills offer the best hope for the future of Britain.

From these powerful, otherworldly beginnings, Morgan’s image begins to turn. In the writing of Chrétien de Troyes, the influential twelfth-century French poet, Morgan le Fay is still a powerful healer, but she has suffered a downgrade in position. No longer the sole ruler of Avalon, she has been demoted to the lover of Avalon’s ruler. Chrétien’s French successors extend this political de-centering and begin to treat her knowledge of the magical arts with deep suspicion. In one popular iteration found in the Vulgate Cycle, Morgan begins life in a nunnery where her quest for knowledge drives her to study healing, astronomy, and the magical arts. Whereas other stories have linked Morgan’s witchcraft to healing and creation, in the Vulgate Morgan uses it to further her own terrible hatreds and jealousies. She grows entangled in an elaborate love triangle with Queen Guinevere and Guinevere’s adulterous lover, Lancelot. Morgan, jealous of Guinevere, works to expose the Queen and Lancelot’s affair publicly. A later version in a work inspired by the Vulgate has her send a “chastity-revealing horn” to Guinevere in an attempt to expose the adulterous affair (this genius plan predictably ends badly). Morgan even goes so far as to create an otherworldly shadow realm, ominously called the Valley of No Return, that she traps Lancelot in three times.

Driven by stories like these, over the next several hundred years Morgan transforms. While she is still associated with healing and Avalon, literature increasingly links her beauty and power with dangerous instability. Her beauty, which in the Vita was a reflection of her inner creativity and goodness, transforms into a sign of a sexuality run amok. Authors increasingly depict her as licentious and prone to jealousies. Her power, which had initially been the only hope for Arthur and the future of Britain, becomes a force of corruption and darkness. Authors show her as a central threat to Camelot and the world as she tries to kill Arthur and his knights through demonic monster servants, deadly seductions, and elaborate plots involving green knights.

Almost inexplicably, Morgan le Fay is also almost always shown as the final person entrusted with a dead or dying Arthur at the end of Arthurian legends. Such is the case in Sir Thomas Malory’s Morte D’Arthur (c. 1470), in which a mortally wounded Arthur is entrusted to an often duplicitous Morgan le Fay who bears him away by boat to Avalon.

One way of looking at this is through her epithet: le Fay. Morgan le Fay speaks to her close association with the Faerie otherworld. Very different than our modern, Disney-fied fairies, the Fae in Celtic and British folklore were otherworldly beings of enormous power who were sources of both awe and danger, and encounters with them led to either great fortune or tragedy. Perhaps, like the Fae, Morgan’s witchcraft was too powerful, too otherworldly, to be confined fully by human moral logic. Saving a person that you’ve just spent years trying to destroy is the sort of thing the Fae would do.

Or perhaps the sort of literary misogyny—and it is literary misogyny—that shaped these later medieval versions of Morgan le Fay didn’t see these things as contradictory. Perhaps this was simply part of being a woman. In medieval humoral theory, women’s bodies were understood as physiognomically unstable. Or maybe it’s what lies at the heart of Morgan’s power, her capacity to heal and create, that’s the problem. That part of what was so threatening about Morgan’s witchcraft was its inherent generative and creative capacities.

So, what’s the state of Morgan le Fay now? In the past forty years, there has been an interest in Morgan as a proto-feminist figure: her narrative ambiguity transformed into a source for telling Arthurian legends from a different (feminine) perspective. Novels like Marion Zimmer Bradley’s The Mists of Avalon (1982) depict Morgan as a Celtic priestess, defending her beliefs against the encroaching Christianity. Fay Sampson’s Daughter of Tintagel (1995) looks at Morgan’s legend from different perspectives, Rashomon-like, finally concluding with her own.

But in many ways these works are overshadowed by the enormous number of films, video games, comics, and RPGs that depict her as a villain. (Handily, Wikipedia has a full list of modern Morgans sorted by “good,” “evil,” or, intriguingly, “other.”) Some modern works, like BBC’s 2008 Merlin, have attempted to round out her character by explaining the cultural, political, and gendered forces that lead her to turn toward villainy. The reality, however, is that many contemporary depictions of Morgan le Fay continue to write her in the same vein as her later medieval representations: beautiful, lustful, dangerous, and powerful. I guess at least they add some modern twists, covering her wickedness in solid gold bodysuits, cutting one liners, and plans for world destruction.

I say this not to crush anyone’s love of the campy villainy of many contemporary Morgan le Fays. You will have to pry Elizabeth Hurley’s quippy Morgan of Runaways from my cold, dead hands. But it’s important to acknowledge that these, like their medieval counterparts, participate in a tradition of literary misogyny. The sort of things that are “evil” about Morgan le Fay’s witchcraft in their modern form—from her beauty to her social manipulations to her jealousies—are undeniably gendered. And if we trace Morgan’s literary history, we see too that her literary fate parallels that of many of the women who stick around the Western literary tradition long enough. Narratives about women, especially powerful women, often turn their power to villainy. This transformation reveals a deep and long-established cultural fear of women who have access to power.

Powerful women, witchy women, might use that for good, yes. (And isn’t it shocking how often that good is in service of saving a man?) But the fearful question at the heart of so many of these cultural anxieties seems to be: is it possible to guarantee that a woman’s magic, that a woman’s power, can be controlled? If we look at Morgan le Fay, who no matter how often her schemes are challenged or defeated returns again and again to stir up witchy trouble, the answer seems to be no, or at least, not fully. Morgan le Fay is always slipping through someone’s control, ready to heal or destroy, create or manipulate. It is that disruptive resistance to control that helps to account for why her power has so often been written as dangerous. Some power just can’t be contained.