Home
»
Uncategorized
»
The Little Dictionary That Could

It’s a skinny thing, Gustave Flaubert’s Le Dictionnaire des idées reçues, not even 100 pages. And The Dictionary of Accepted Ideas also isn’t the source you’d turn to when someone peppers a conversation with a few big words. It is, however, the dictionary you could pick up and read during, say, a federal government shutdown.

Flaubert’s definition of America: “Famous example of injustice: Columbus discovered it and it is named after Amerigo Vespucci. If it weren’t for the discovery of America, we should not be suffering from syphilis and phylloxera. Exalt it all the same, especially if you’ve never been there. Lecture people on self-government.” 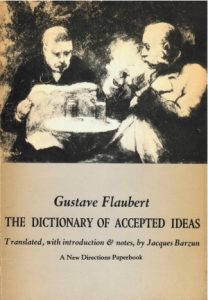 In 1913, thirty-three years after Flaubert’s death, the little book was published in French. Forty-one years after that, The Dictionary debuted in English. Translating was no easy task. The linguistic nuances of humor and satire, particularly when it comes to language, can often be lost, literally, in translation. And though Flaubert’s original work takes aim at a French society he loathed, it turns out that there are still quite a few similarities across the pond and the years.

COMPROMISE. Always recommend it, even when the alternatives are irreconcilable.

EXCEPTION. Say it proves the rule, but don’t venture to say how.

GOTHIC. Architectural style which inspires religious feeling to a greater degree than others.

HORIZONS. Find them beautiful in nature, dark in politics.

IDIOTS. Those who differ from you.

NATURE. How beautiful is Nature! Repeat every time you’re in the country.

“From infancy,” writes translator Jacques Barzun in the book’s 1954 introduction, “[Flaubert] refused to suffer fools gladly; he would note down the inanities uttered by an old lady who used to visit his mother, and by his twentieth year he already had in mind making a dictionary of such remarks… From the early 1850’s, Flaubert kept writing and talking to his friends about this hand-book, this Dictionary, as his beloved work, his great contribution to moral realism. The project was for him charged with a personal emotion, not simply an intellectual one: ‘To dissect,’ he wrote to George Sand, ‘is a form of revenge.’” 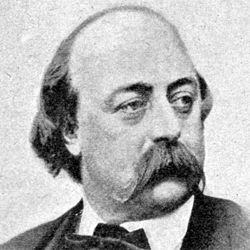 For years Flaubert took notes on his fellow man’s crimes against language and, inevitably, each other. “Flaubert,” Barzun explains, “has an infallible ear for the contradiction that everybody absent-mindedly repeats…” Though I’ve yet to read Madame Bovary (I know, I know), that prostitute-loving 19th century writer is intimidating. His ability to zero in on what’s just under the surface of language rivets me. I am terribly jealous of those who can see what’s really going on in chaos of culture before the dust settles—before the rest of us can even see clearly in hindsight.

One would hope, with more than hundred years on Flaubert and his observations, that we’d have ourselves—and our language—just a little more together. Unfortunately not. Most of us don’t have the energy, even if we have the recognition, to fight the ways that lazy thinking and too-easily-embraced cultural norms shape not just our language, but also our lives.

This past August, Teju Cole wrote about The Dictionary of Accepted Ideas, admiring Flaubert’s protests against automatic thinking and challenging himself to come up with a few of his own definitions. “Stupidity,” he admits after the personal exercise, “stalks us all.” But maybe that’s  also what can save us—acknowledging the propensity for stupidity and moving oh-so-carefully around it, to approach the world and each other with a sense of humility.

Flaubert’s ultimate goal for the notes, as he writes in a letter to then-lover Louise Colet, is that “after reading the book, one would be afraid to talk, for fear of using one of the phrases in it.”

Sorry, Flaubert. In that case, we’ve disappointed you. We keep talking. And talking. Without the right amount of fear. We have, however, in the years since you left us found a cure for syphillis (SYPHILLIS. Everybody has it, more or less) and now have plenty of other words now for coitus (COITUS.COPULATION. Words to avoid. Say: ‘They had relations…’). And so we grow. In some ways, at least.