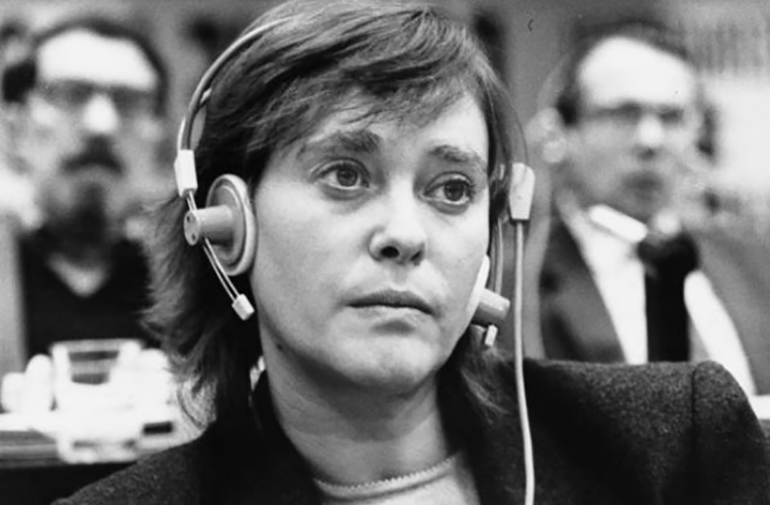 When I first discovered the modern Italian classic Passaggio in Ombra, the only thing I knew was that the author was a woman. I’d found it while researching an article commissioned by Literary Hub and the activist group Women in Translation about works by Italian women that had not been translated into English. I was shocked that a work that had won the Strega Prize (the Italian equivalent of a Pulitzer) had not been translated into English. So I tracked the book down, and decided rather impulsively that I needed to translate it.

The author, Mariateresa Di Lascia, finished the manuscript for A Walk in the Shadows (my tentative English title for her book, Passaggio in Ombra) twenty-five years ago this year. Shortly thereafter, she tragically died, at the age of forty—never living to see her novel go on to win Italy’s most prestigious literary award the following year, in 1995.

At the time I found the book, in mid-2016, I was finishing an MFA in Writing, but instead of working solely on polishing my short stories, I’d begun looking around for Italian books to translate. I had long dreamed of translating a novel, and I saw the process as an apprenticeship in fiction-writing.

As I began reading Passaggio in Ombra, I quickly noticed the novel’s lush prose and at times archaic vocabulary. While it was published by Feltrinelli in 1995, the book is almost like a time capsule. Its style is deliberately flowery and dense, leading Di Lascia to be compared to Giuseppe Tomasi di Lampedusa, the legendary author of the similarly dense 1958 Italian classic, The Leopard.

After my first read-through, I considered the book to be simply about a recluse—Chiara—who after a difficult childhood never amounts to anything. Describing her limbo-like existence, she says, “Imprisoned by my own life, I’ve remained a creature of the periphery” (translation my own). Translation involves not only close reading but re-reading, and so, in the course of reading particular passages dozens of times, I’ve come away with a different summary—or rather an additional summary. Sure, the book tells the story of Chiara, a middle-aged loner with the air of a bag lady who doesn’t work and never had children. But it is about much more than that—and is also unexpectedly attuned to our current cultural moment.

Consider this: One woman character is raped, becomes pregnant, and is forced to give up the child, with whom she later reconciles in clandestine meetings that have the air of trysts. She’s then forced into an arranged marriage she must accept to repair her image. Another contracts syphilis as a newlywed (from whom? Ahem!) and must abort a pregnancy because the disease is ravaging her; thereafter she cannot have children. One stubbornly pursues single motherhood after falling pregnant from a short affair. And the last and most important—Chiara—mindful perhaps of the fates of the other three, opts out entirely from marriage, children, and life.

Di Lascia wrote the novel long before the words “me too” meant anything other than “ditto.”  But I see the book as incredibly pertinent to the way our society is finally grappling with how a woman’s life is often marked by an endless series of hidden indignities that mar and distort. While the prose may at times have an antiquated bent, the crushing double standards dished out to the novel’s heroines are disturbingly familiar.

This novel is a #MeToo novel. And yet, how can it be? It was published it a quarter of a century ago! But take Giuppina, the character who is raped and forced to give up her child. Who rapes her? A friend of her father’s. A friend. She’s a fictional character yet that description gives me the chills. This is a moment where the trauma women experience is finally coming to light. And this is a novel where the trauma women experience forms the backbone of the narrative.

To be sure, while the author was certainly a pioneer (and an official of the Italian Radical Party), she logically couldn’t imagine something like #MeToo. Moreover, she eschewed the label “Feminist” (as did other important Italian women writers before her, including Elsa Morante). She was bold, fearless and thoughtful. But she didn’t like anything that singled women out. She wrote men just as sympathetically as she did women.

And yet, she seeded the book with these little incidents—sometimes mentioned in passing or briefly—such that all kinds of crimes against women are hidden in plain sight.

That tells me the value of exploring older books to see what they can tell us—to see what they have been telling us all along, whether we realized it or not. I find it ironic—and painful—that the reckoning happening now could have happened much sooner if only those who have doubted women paid closer attention. How long do we need to know something before the urge to act on this knowledge bursts upon us? To wit, the relevance of this translation project has made my work a personal crusade. I need to see this book published in English.

As such, I happily spend my time translating paragraphs that lay out the cost simply of being born a woman rather than a man. In the world Di Lascia created, women often resign themselves to different lives from the ones they had once imagined. The narrator is a prime example. Chiara tells us early on:

Now that my old age approaches and my monthly bloodshed has inexplicably stopped early, my humble appearance and the wrinkles that have slowly appeared act like a cloister even more than the slovenly clothing that I wear on my body. Dressed like this, ageless and sexless, I can finally laugh off the world.

In the myriad notes I’ve made during the project, I scrawled at one point, “She may still be a virgin.” Part of that laughing off of the world she does? It’s a result of watching her father leave her mother stranded at the altar, and also of her own failed love story.

Passaggio in Ombra is also the story of the other women in Chiara’s family, including her aunt Giuppina, the woman who survived rape. Giuppina—like many young women and girls—is completely unprepared for where unsought male attention can sometimes lead. Di Lascia writes:

With a friendly character, and a disposition such that she considered the town an extension of her house and the neighbors an extension of her family, Giuppina must have seen the constant embraces from Bernardo Bucci, a friend and peer of her father’s, as nothing more than paternal attention. Moreover, the growing chorus of gossip in town and her friends’ embarrassed hints did nothing to save her from her fatal destiny.

Her fatal destiny. What’s notable about this description is that Giuppina doesn’t die a tragic or early death in the book. Yet how many women who have come forward under the #MeToo banner would describe their unwanted interactions with male aggressors as fatal? I suspect many. Fatal to their self-esteem, fatal to their relationships, fatal to their careers.

The #MeToo moment is an American phenomenon, to the extent that the reckoning with female trauma at the hands of over-reaching males began here and has probably had its widest impact here. So it’s interesting that a book from another country can tell us something about a moment we are living now in the US. That’s one of the gifts of working in, and reading, literary translation.

Before I began translating the Di Lascia text, I was trying my hand at translating various male authors, only to discover, much to my chagrin, that the rights had already been secured and another translator was at work on the English version. That was a form of Divine Providence. Indeed, when I think about all the stories by women I’d like to translate, I am reminded of a passage from the Di Lascia book: “The chatter rises like a chorus of cicadas in August, taking only a moment to fill the whole room. I become a flower, a tree, a blade of grass. Or maybe I am the bare earth trampled underfoot or the flowing water that sated their thirst.”

Tags:#MeToo, A Walk in the Shadows, Mariateresa Di Lascia, Passaggio in Ombra