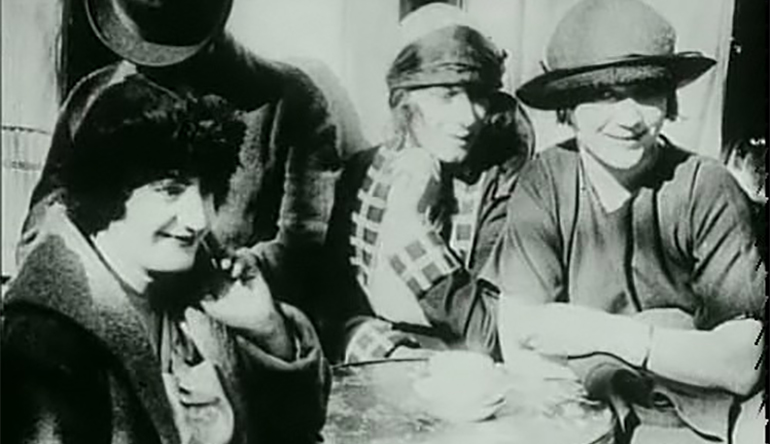 In A Moveable Feast, Hemingway tells the story of Gertrude Stein eavesdropping on a garage owner in Paris who yelled at a young mechanic too slow in repairing a car, “You are all a lost generation.” The phrase struck Stein, who used it to describe Hemingway and his compatriots. “That is what you are,” she reportedly told him. “All of you young people who served in the war. You are all a lost generation.” The young people who made up the lost generation were her friends and protégés, writers and artists who felt out of place and unanchored after the First World War. The generation straddled wars, genres, and identities, leaving behind the staid writing of Edwardians, or what Hemingway referred to as “broad lawns and narrow minds.” Gertrude Stein was their godmother, acting as both an artist and a supporter of the arts.

While Hemingway and Fitzgerald, Joyce, and Sinclair Lewis were making noise and changing literature, a group of women, also gathered largely in Paris, were making their own ripples. Stein and her partner, Alice B. Toklas, kept the literary salon at 27 rue de Fleurus, where they hosted those same male writers, along with Picasso, Ezra Pound, and anyone else making a splash. There, at the center of the literary and artistic left bank, were the women, too—among many others, Stein and Toklas, as well as American Djuna Barnes and her partner, Thelma Wood. If the lost generation of men lived between ideas and events, the women lived between genders and roles, exploring and subverting the expectations of women as muses and women as writers.

The Autobiography of Alice B. Toklas (1933) emphasizes the performance of both gender and writing. Stein’s first person biography of Toklas ignored the genre it professed in its title in favor of a new genre of book—a first person biography. Stein wrote the book; Toklas typed it, a menial task largely considered to be women’s work. Stein tells us Hemingway offered to do this for her too, surprisingly for a writer who is mythologized as the ultimate alpha-male. Stein was not playing a male artist, though. She allowed Picasso to paint her in Autobiography, serving as his muse, all the while using Toklas as her muse as she wrote the book.

At one point, Toklas narrates through the pen of Stein,

Toklas polishes Stein’s work, in effect helping her craft it, dusting it, the labor amounting to some combination of composition and revision, a space between the writing processes, between the traditional concept of men’s work as writing and women’s work supporting and inspiring.

Djuna Barnes and Thelma Wood were two guests at Stein and Toklas’s literary salon (Stein famously complimented Barnes’s legs when they first met, perhaps a form of objectification we usually ascribe to men). If Stein confuses the performance of gender and biography, Barnes creates dualisms and rests between them with all the feeling she can summon. Nightwood (1936), her masterpiece novel loosely based on the period of her life after breaking with Wood, is full of juxtapositions between light and dark, nature and artifice, animal and human, and notably, man and woman. She, like Stein, belonged to a generation of lost artists, and further complicated her own position as a woman in a man’s world through binaries she created in her storytelling.

Nightwood is wild and rending, allowing itself a full scope of breaking open any notion of categories. Dr. O’Connor, a rambling and cross-dressing unlicensed gynecologist, speaks of emotions as anatomical parts: “There is no pure sorrow. Why? It is bedfellow to lungs, lights, bones, guts and gall! There are only confusions.” He confuses a human’s emotional soul with anatomy, the mind and the body negotiated through their depending on each other to survive.

The two female characters, Robin and Nora, loosely based on Barnes and Wood, nearly devour each other in their heartbreak. Nora Flood asks Dr. O’Connor, “Have you ever loved someone and it became yourself?” She, Robin, and O’Connor are trapped in gender binaries as well as the confusion of loving to the point of losing sight of who is who. Nightwood’s refusal of categories is new and groundbreaking to the lost generation. Barnes leaves readers with an ambiguous ending—do Robin and Nora reconcile or not?—mirroring the same themes Hemingway and other male writers wrote about through the lens of the war. Nothing, after war, can be certain, nor pinned down. The choice to move to Paris, live in nontraditional arrangements, or invent modernism seems inevitable.

The First World War, according to the male writers who fought it as well as the women who didn’t, killed tradition, order, and the American dream. How could writers or typists, artists or supporters, do otherwise than to rest uncomfortably in the gray area left in its wake? Stein and Barnes’s books and their roles therein rejected what didn’t work, even when there was nothing to take its place.