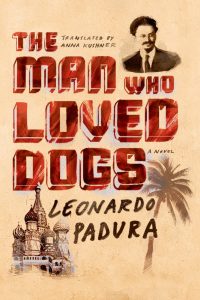 “I asked you to come today because I want to tell you that story, Ivan,” the man who loved dogs said to me. [… ] “It’s an incredible story; you’ll see that I am not exaggerating. Before I tell it to you, I’m going to ask two things of you […] First, don’t be so formal with me anymore. That way it will be easier to explain everything to you. Also, don’t tell anyone, not even your wife; that’s why I asked you to come alone. But above all, I don’t want you to write it down.”

On a deserted Cuban beach in March of 1977, Iván Cárdenas Maturell, a humble editor of a veterinary journal, meets a mysterious man out with his two Russian Wolfhounds. While these were the dogs of the Russian aristocracy, a symbol that has no place in the glorious proletarian society, Iván soon learns that Borzoi were also the favorite breed of both Lev Davidovich Trotsky and his assassin, Ramón Mercader.

Painstakingly researched, The Man Who Loved Dogs reconstructs eleven years of Trotsky’s exile in Turkey, France, Norway, and finally Mexico, and of his assassin’s life over that same period. We see Mercader recruited away from the front lines of the Spanish Civil War and reborn first an NKVD agent, then undercover as Jacques Monard, a Belgian photographer. The factual details of each man’s life blend seamlessly with the kind of liberties that a work of historical fiction allows. (Mercader has a delightful run in with George Orwell in Spain.)

There is no glorious revolution in The Man Who Loved Dogs. Instead, this is a project of humanization (or rehabilitation, in the Soviet parlance). Stalin demonized Trotsky ruthlessly, but the Lev Davidovich we follow is a tired, often defeated man, who lived to see his friends executed and the revolution betrayed. At the same time, Padura makes us sympathize with the man who murdered our beloved Trotsky with an ice pick. Far from a hardened killer (despite the obligatory montage of his Siberian training), Mercader is physically ill for days before the attack, and doubts his ability to carry out the act. He hears Trotsky’s scream for the rest of his life.

The only villain here is Stalin, to whom Padura shows no mercy. He is a ruthless puppet master, a point we feel not so much in the laundry lists of show trials and purges, but the fear he inspires in even the most mundane situations. Consider the story Ramon’s NKVD mentor Leonid Eitingon tells about the Hotel Moscow:

[T]he plans were given back to Shchusev the designer…both of them authorized by Comrade Stalin. […]. The only solution was to ask Comrade Stalin if he had made a mistake, but who dared to bother him during his vacation to Sochi? Besides, the general secretary was never wrong. Then Shchusev was inspired, like the genius he is: they would carry out both projects in a single building, half according to Saveliev and the other half according to Stapran…Thus was this freakish building born. […] The building is absurd, an aesthetic horror, but it exists and it conforms to Comrade Stalin’s ideas and decisions.

It would seem cliché to have such a vicious, all-powerful antagonist in a novel, if not for the fact that Stalin achieved terrifying power in his lifetime. The pure terror the authoritarian communist regimes inspired in their subjects is palpable long after his death. So long, in fact, that it takes Iván (our Cuban narrator) decades of living in fear and mediocrity to get the courage to write the story of the man who loved dogs.

In the end, the communist machine devours its own. Mercader serves twenty years in Mexican prison, and the best his Hero of the Soviet Union award can do is shuttle him to the front of the Moscow bread line. His mentor Eitingon is accused of a plot to poison Stalin, and he goes to jail as well. By the time Mercader meets Iván on the beach, he is an old man dying of cancer, from an irradiated wristwatch. Nor does Iván get out safely: in the end he succumbs to the weight of the story he was so afraid to tell all these years.

The only shortcoming to Padura’s thorough research, and his loving his reconstruction of Trotsky and Mercader’s psyches, is that he sacrifices the overall pacing of the novel in the interest of completeness. On the other hand, those four hundred eighty-two pages also serve well to emulate the creeping oppression of waiting, year after year, for the axe to fall. Thus Padura reveals the tragic fate that damns the entire system, for the leader, the party member, and the prole alike. The lesson, which Trotsky learns quickly and Mercader slowly, is that even the most passionate revolutionaries exist at the mercy of forces outside their control.