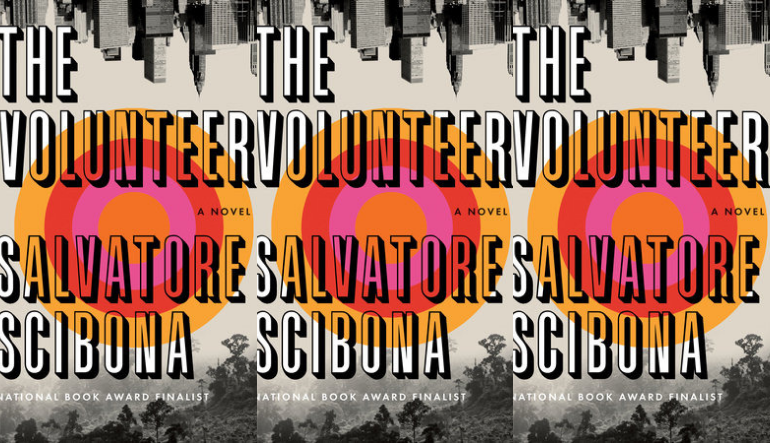 It is often the descriptive details of character, dialogue, style, and rhythm that we pay close attention to when we consider language in fiction, but one of the greatest powers of language is its ability to manipulate time so that its linearity is broken up and we, as readers, are able to witness the “unseen.” We might pause for reflection or return to backstory, get swept up in a character’s reverie or stream of consciousness, or fall into essayistic soliloquies voiced from a collective society.

These literary opportunities—shifting the focus to other points in time, whether real or imagined—are apparent in Salvatore Scibona’s new novel, The Volunteer, out this week. The book spans four generations of a family suffering the consequences of the Vietnam War and sweeps over approximately a hundred years. But the reader feels this expansion, and contraction, of time less in the book’s structure and more in its sentences—how they move in and around the actions of a scene while offering insight into the past, and sometimes into the imaginary.

The novel begins in 2010 with a young boy stranded at the Hamburg-Fuhlsbüttel Airport. It then jumps back in time to America in the late 1960s, following Vollie Frade, a character who forges his father’s signature while a minor so that he can enlist in the Marine Corps. Vollie volunteers not for honor or even heroism, but to escape his Iowan home where he struggles with his existence and sense of self. While serving in Vietnam, he meets a mysterious character named Lorch who recruits him for a secret government operation that sends Vollie to Queens. He escapes from this operation, then heads to New Mexico where he falls in love with Louisa, a free-loving woman who is a member of a love commune, and begets a son, who then grows up to serve in Afghanistan. The sprawling nature of this multi-generational plot moves geographically and throughout many cultural turns in American history, but what is most masterful are moments in the novel when Scibona is able to reflect this same kind of vast terrain inside the imagination of his characters.

For instance, near the start of the novel Vollie discovers that his parents are illiterate. Shamed by the news, he runs upstairs to his bedroom and stands at the window looking out, where he sees an image of himself on fire in the yard. His father stands over a steel can from which flames leap; inside is a burning figure of himself.

Vollie stood upstairs at the window in his underwear, engulfed by a fear that was the god of all previous fears, encompassing them, compounding them into the perfect fear that was being realized right now: his father and mother were burning him alive. Black smoke, the remnant of him, rose and dispersed into the nothing of the night sky.

Vollie’s imagination wanders into a space that does not exist; it’s outside of the character’s reality, yet incredibly real to him. “Compounding them into the perfect fear that was being realized right now” directs us to the present—“now”—emphasizing that the scene is imagined; it has been slipped into the narrative by the author’s hand, Vollie’s reverie marked with the stated “now.” And yet, time stops mid-thought. The scene continues with the description:

And yet, if Vollie himself had just been turned to nothing out there, what was this limbed creature inside the house that watched it all and shivered with cold and still hungered for supper?

His self was a ‘who’ who had burned away in the flames; but the creature was a ‘what’ that could endure even this. The self that had seemed all of him was only a part; it could be shed and left behind.

Such an intimate look at how Vollie perceives himself as member of his family–a philosophical and poignant image of him removing himself from the family, of disappearing. This is, in fact, what eventually happens in the novel. He enlists in the Marine Corps without telling his parents.

Descriptions of rumination demonstrate how to pause and reflect in order to get to something more essential in the character’s psyche, something that couldn’t be expressed with either action or dialogue—or couldn’t be expressed as powerfully. When the text reads. “The self that had seemed all of him was only a part; it could be shed and left behind,” there’s this aching vulnerability that is exposed about the character. We witness Vollie’s creative authoring of a scene that is only in his mind; time is suspended in order to get a closer look.

The theme of disappearance haunts Vollie throughout the book. When he moves to New Mexico and changes his name in an effort to wipe away his past, he meets Louisa, who soon realizes that Vollie is actually a man she’s heard about from the war named the Volunteer, someone who “looked much scarier now than in the pictures.”

Was it true what she’d heard, that his eyes came open in his sleep? And that none of the boys told him, and to see if they could insert stuff in his dreams they’d hung in front of his open, sleeping eyes a magazine cartoon of a devil roasting people in the fires of hell? And then in the morning the boys asked him how he slept, and he said real good, and they asked if he had dreams, and he said no, nothing?

With open eyes, Vollie is in a state of daydream, a kind of temporal suspension. But the space he inhabits is a cage as much as it’s a room without walls.

These episodic turns that make us pause in a novel inform character. Recollections, backstories, memories, dreams—when a reader is privy to the creative mind of a character facing a dilemma, as in The Volunteer, we get to know them better.