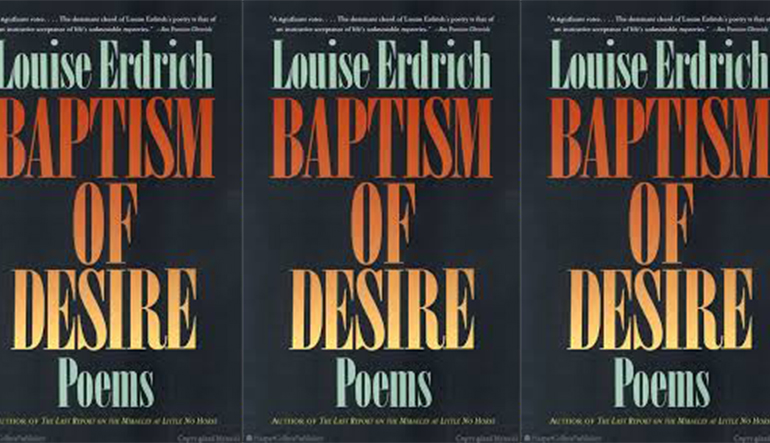 Most of us can think of examples of writers whose hybrid identities—as fiction writers and as poets—see them much stronger in one genre than the other. When a writer can pull off facility equally in each genre, it seems nothing short of miraculous.

Many scholars of Native literature have pointed out the extraordinarily high number of Native writers who are prolific in more than one genre. (Think Sherman Alexie as another obvious example of cross-genre talent.) Thinkers like Paula Gunn Allen have speculated on why this might be, offering theories that the interrelatedness of literary forms reflects the synthetic nature of Native thinking. To me, the poems of Louise Erdrich highlight this synthesis, which is visible in both the form and the content of her poetry. Take Baptism of Desire, her 1989 masterpiece that investigates the collision of Catholicism and Ojibwe systems of belief. While Erdrich’s fiction investigates the devastating impact that Catholic missionaries had on traditional Ojibwe practices, Baptism of Desire investigates a soul that exists in the hybrid space where the two spiritual forces meet.

The poems that anchor the first half of Erdrich’s collection—“Saint Clare,” “Mary Magdalene,” “Avila,” “The Sacraments”—examine the overlap of femaleness and Catholic faith. Clare, in particular, appears in numerous poems. Clare, who was a friend and spiritual companion to St. Francis of Assisi, is a symbol of both desire and the renunciation of that desire, representing both the fallible (female) human and the spiritual ideal—the negation of that humanness. (Bios of Clare suggest that she may have initially hoped to marry Francis, and pursued a life in the convent when he refused.) Many have remarked on the oppositional nature of women in the belief systems of Catholicism and Ojibwe: in the former, women’s power is negated, and in the latter it is celebrated. In Erdrich’s poems, women are often shown in human relationships, rather than being depicted in the typical way as “brides of Christ”: St. Teresa of Avila is addressed by her brother; St. Clare speaks to her sister, and Mary Magdalene speaks to her clear object of sexual desire, Christ. Traditional Catholicism exaggerates these figures; Erdrich restores them.

Towards the end of the book, readers see the formal hybridity at play: the second half of the book is a series of prose vignettes featuring Potchikoo, a traditional Chippewa trickster figure. Potchikoo was first featured in Erdrich’s debut collection of poems, Jacklight, where the vignettes took us through his birth, marriage, aging and death. The presence of a trickster in a book that takes the theme of hybridity as its central concern is, of course, an apt choice. Tricksters belong to the world of men and gods: they represent both human fallibility and divine power.

In one vignette, after Potchikoo has died, he gets to the pearly gates (after a winding journey complete with many distractions) and Saint Peter consults his book to determine Potchikoo’s worthiness: “Potchikoo became frightened to think how many awful deeds would be recorded after his name. But as it happened, there was only one word there. The word Indian.” Saint Peter tells him to keep walking. After he is declined entrance to heaven, Potchikoo follows a grass path to Indian heaven, which was “just a simple pasture gate of weathered wood.” Although there are people there, eating and talking around a fire, Potchikoo is not satisfied because he misses his wife. Although the portrait of hell and of Saint Peter’s exclusionary heaven are highly satirical of Anglo culture and religion, it is important to note here that Potchikoo is not satisfied with “Indian heaven” either and takes leave of it to go home to make love to his wife. It is not that the poems reject both Native and Christian systems of belief here. It’s that Potchikoo exists in the indeterminate space where the two meet.

In the book’s final poem, “The Ritual,” the speaker sees her primary role as the protection of her husband and children, and to that end, she calls upon all of the figures in her belief system. Trying to stay safely out of the path of a calamitous God, she says:

I bind the net beneath you with the tendons of my wrist.
I call the guardian owl
who terrifies harm. I hold the sheaf
of lucky flowers to your forehead.

By the poem’s end, the speaker has climbed back into the bed she shares with her husband, covered with “the wedding quilt, / the twelve-branched tree of life” and hears she hears the “long, receding footsteps” of the day’s potential harms. In many ways, this poem, and all the poems in the fifth section of the book, reflect a traditional notion of ceremonial Native American literature.

The speakers in Baptism of Desire consistently reveal identities forged of two religious traditions: the same woman who describes the moments of her life through the lens of the seven Catholic sacraments is the same one who invokes the Ojibwe guardian owl to protect her sleeping children. The synthesis of the two cultures is embodied, not merely in the speakers of the poems, but in their images, symbols, metaphors and form.