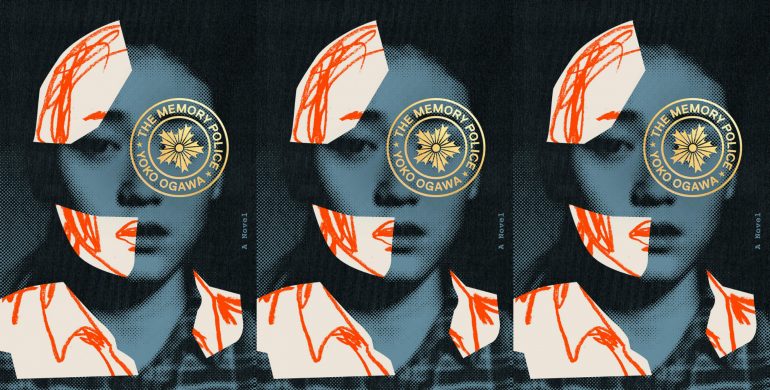 George Orwell’s Nineteen Eighty-Four and Margaret Atwood’s The Handmaid’s Tale, dystopian novels that explore overreaching states, have skyrocketed in sales since Trump’s inauguration, as readers seek to remind themselves of what almost was (the implications of losing world wars) and what might come to be (totalitarian leadership). Yōko Ogawa’s The Memory Police, translated by Stephen Snyder and originally published in 1994 by Kodansha, is a newer entry to the genre but one with a speculative bend. In the novel, the eponymous government group is tasked with making objects disappear, both from the Japanese island where the story takes place and from its community’s memory. They leverage secret scientific advances to realize this socio-cultural eradication, eliminating not just objects and memory but related industries and jobs too. The government, through its faceless Memory Police department, achieves a kind of mass thought control.

The Memory Police start by erasing benign things, like ribbons and stamps, and moves onto the city’s infrastructure, like the island’s ferry system, preventing anyone from leaving the island.  Though we don’t learn much about the deployed biotechnology, it infiltrates the island community with razor precision.  After each instance of its use, however, “things [go] back to normal, as though nothing has happened, and no one can even recall what it was that disappeared.” In this way, the city’s physical and cognitive means of industry are dismantled by the government.

The story centers on a novelist who wishes she could remember all she’s lost and who hides her editor, who she calls R, after the Memory Police discover he’s immune to the mind control. In hiding, R is separated from his wife and child, and his friendship with the novelist blossoms into something more intimate. While the novelist focuses on writing, R tries to help her remember her family. He shows her forbidden (already-disappeared) photographs and perfume she’s been concealing in the basement. But sensory memories fail her.

When the government announces novels are next to disappear, the novelist asks her editor, “If I go on writing stories, will those memories protect me?” He says yes and pleads for her to keep writing in secret. But when the pair witnesses a woman being dragged from a book burning yelling, “No one can erase the stories!” it becomes clear he is wrong—the novelist’s words won’t protect her, because she won’t remember how to write. Unlike Ray Bradbury’s Fahrenheit 451, people here aren’t just denied access to the printed word; in Ogawa’s dystopian world, the Memory Police remove society’s ability to write, remember, and fight persecution. They literally remove humanity’s ability to record history.

Readers should ask themselves what happens once the meaning of words is removed or regulated. How does this impact our ability to write and tell stories, to tell the truth? The most eerie thing about Ogawa’s story is that we don’t find out the answers to these questions. She surrounds her characters with increasing, immutable, and deafening silence. Some learn how to live without things, without loved ones, a passive approach to self-preservation; others, like the editor and novelist, fight back, even if it’s in the dark.

There’s a metatextual element to The Memory Police that can, at times, take away from the characters’ journey. Perhaps not enough space was given to these parallel character’s development. The protagonist writes a similar story to her own—inserted as palimpsest—where a typist loses her ability to type and is kidnapped in an attic by her male instructor. The wink works, but, in the process, readers might find themselves wanting to learn more about R and the novelist, their relationship so central to the heart of the tale.

Still, though—you’re in good hands with Ogawa, a Japanese writer who’s won every major literary prize in her country and many others abroad, including the Shirley Jackson and Independent Foreign Fiction awards. She’s patient with her story, letting it unfold along with its small cast, details revealed in due course. She could have written a political thriller but opts instead for a closer look at communities under siege by the very political forces that should be protecting them.

Walking away from The Memory Police, the theme of forced silence permeates. We lack the biotech to remove memories today, let alone erase them from an entire population, but the government and people alike have the power to omit truths from history. We create silences of our own, either because of national shame or because we forget. How often do we fail to underline African American convict leasing when discussing the United States post-Civil War or Japanese internment camps when celebrating American patriotism of World War II? And today, will we be brave enough to challenge the current immigrant camps for separated Hispanic youths and their families? Ogawa hits on something real in her novel—we must remember to write and write to remember, to ensure the survival of truth.