We all know the best thing to take with you on a summer vacation is a good book. Here are this August’s must-reads, begging to be read poolside or in the shade. 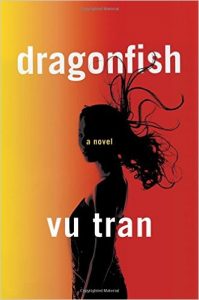 In his debut novel, Writing Award winner Vu Tran writes that “the life you leave behind never dies.” This eerie truth forms the thematic backbone for Dragonfish, a juicy Las Vegas noir about the ruthless ties that bind old lovers, mothers and daughters, and double-crossing gamblers.

Robert is a weary Oakland cop who can’t help but miss the chaotic romance he had with his ex-wife Suzy. When he finds out his beloved has disappeared from her tumultuous and violent life in Las Vegas, he descends into the whirlwind of their past together and the secrets she hid about her life in a Malaysian refugee camp, including the existence of an estranged daughter. Suzy’s new husband Sonny—who is, by turns, both savage and kind—blackmails Robert into finding the wife he loves and also feels he owns. Robert’s allegiances twist and double-back as he learns the truth about Suzy’s mercurial existence. As his own hopes of reuniting with her hang in the balance, Robert must put himself in one powerful man’s line of fire in order to help mend a broken family bond, just as the golden dragonfish is believed to do.

A sophisticated mystery anchored in one woman’s quest to make amends with the daughter she abandoned, Dragonfish delicately capsizes our notions of what it means to long for escape from the prisons of our own making. 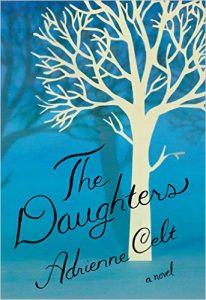 Adrienne Celt’s mesmerizing debut gives new life to Virginia Woolf’s notion that “we think back through our mothers if we are women.” Centered around a family curse that began when Greta, the family matriarch, unknowingly makes a terrible bargain in order to have a daughter, The Daughters traces the fates of four women whose virtues, sins, and passions are inextricably linked.

The novel lithely undresses the secret question many women have asked themselves: what part of myself will I lose once my child is born? World-class soprano Lulu fears she’s lost her voice on the day of her daughter’s birth—which also happens to be the same day her beloved grandmother Ada dies. Ada has long been the keeper of the family folklore, a trait her own daughter Sara despised. In grieving the loss of her grandmother and her voice amid the chaotic melancholy of early motherhood, Lulu returns to the magical tales Ada used to spin as a means to dream herself back into being.

I was lucky enough to have a baby of my own in the middle of reading Celt’s book, and I can’t imagine a more gracefully incisive piece of art to shepherd me through such uncertain trials on my way toward finding deep joy. With prose as star-lit and heart-bending as the story itself, The Daughters demands to be read by every sister, mother, daughter, and friend. 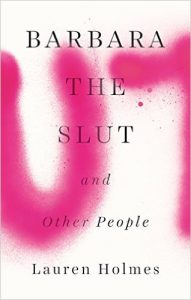 From start to finish, this funny debut collection slyly shines a light on taboo without taking itself too seriously. Holmes’ frank prose sings with simplicity, and her characters often find themselves stuck in life’s in-between moments: that lethargic summer before grad school, the alternatingly turbulent and dull weeks before the end of a relationship, the heavy hour spent waiting for test results. Each story swells with the possibility of youth, and together these stories question whether that possibility can coexist alongside an authenticity of the heart.

In “How Am I Supposed to Talk to You?,” a trip to the beach in Mexico to sell underwear out of a suitcase turns into a moment of truth between mother and daughter. “Mike Anonymous” causes more than one kind of confusion when he shows up at an HIV clinic demanding to be tested. A golden retriever charts the ups and downs of the relationship between her owners in “My Humans,” and slut-shaming gets even more toxic when “Barbara the Slut” earns a Princeton acceptance letter and rises to defend her autistic brother.

Barbara the Slut is the perfect accompaniment to a day at the beach, served best when swapped between friends and read while sucking on a Blow Pop.

Make Your Home Among Strangers

In her debut novel, Iowa Short Fiction Prize winner Jennine Capó Crucet takes an unusually comic and wise look at the dream of leaving home and that dream’s ambivalent reality. When Lizet Ramirez gets accepted into an elite East Coast university, her family in Miami interprets her decision to attend as abandonment and betrayal. Her parents divorce, her sister juggles life as a single mom, and her mother gets swept up in the life and cause of young Ariel Hernandez, a boy who watched his own mother die as they fled Cuba in a raft.

The white landscape and even whiter student body at Rawlings University leaves Lizet longing for a real connection—not just with her new classmates and her first love back in Miami, but with herself. What she finds when she returns home for a surprise visit at Thanksgiving pulls her even tighter between the girl she once was and the woman she’s becoming.

Make Your Home Among Strangers is as fun to read as it is essential. Crucet writes with insight and flair about resilience, loyalty, and the fight to find home again once you’ve left it.