Home
»
Interviews
»
The Narrative Conscience: An Interview With Connie May Fowler 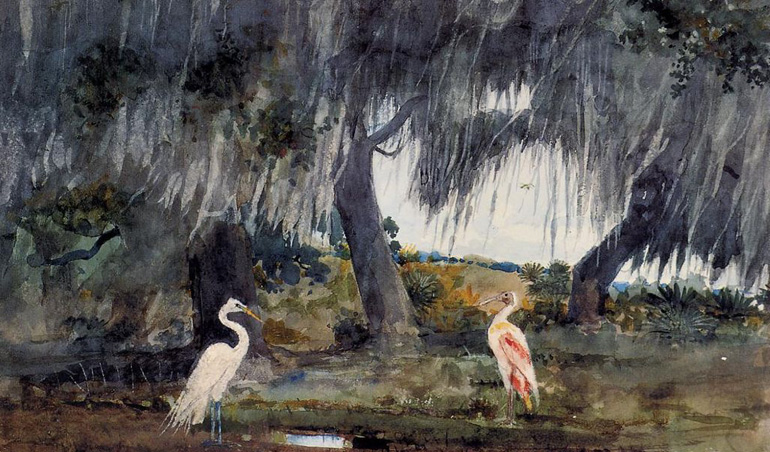 Connie May Fowler’s new memoir, A Million Fragile Bones, is the story of finding home on a Florida sandbar, a migratory crossroads for monarchs, hummingbirds, purple martins, where “dragonflies stir the air with the metallic thrum of transparent wings.” Alligator Point was also a dumping ground for surplus military ordnance. In 2010, following the Deepwater Horizon explosion, an estimated 210 million gallons of oil spewed into the Gulf. The oil spill, and the toxic chemical dispersants used to break apart the oil, changed the course of life for untold thousands of creatures along the coastlines of five states and sixty-eight thousand miles of ocean. Alligator Point, as Fowler had known it, was no more.

“This place teaches me a single lesson over and over,” Fowler writes. “Loss is not a cold, lightless grave. It is life.”

Carolyn Ogburn: I found in A Million Fragile Bones both stillness and movement. The thousands of dead animals, drifting, both still and in motion. How were you thinking about stillness, and motion, in the book?

Connie May Fowler: I’m not sure if there is such a thing as absolute stillness. I mean, even when a life perishes, the corporeal body is in movement, transitioning into food, dust, earth. Death is a busy time in the cycle of life. As for the spirit—if there is such a thing—one can surmise it, too, experiences quite the journey. In moments of great physical stillness, say what we experience in meditation, the spirit, the internal life of the person meditating, is quite active. On the other hand, extreme physical activity—long distance running, for example—requires a stillness of mind and focus. Maybe we are at our best when the two are in harmony with each other. Perhaps one of the definitions of chaos is those moments when stillness and movement are out of balance.

CO: Why did you choose memoir to tell this story?

CMF: The memoir began before the spill. I viewed it as an idyll, a Pilgrim at Tinker Creek meets the sea sort of project. But about two months in, the oil spill happened, inevitably altering both my sacred place and the book.

Throughout the book, my job is to bear witness. I bear witness to my past, to my present moment, to the physical place I viewed as a paradise. When the oil rolls in, I bear witness in minute detail to its destruction. At the end of the book, there is an appendix which provides nuts-and-bolts information about the ongoing destruction in the Gulf, the choice to use the dispersant Corexit, and other facets of the story that do not organically emanate from the narrative conscience.

CO: In many ways, this book is a call to pay attention to the manipulations of media and governmental oversight by multinational corporations. What do you hope will come from reading your book?

CMF: On that basis, sadly, I think the book is more relevant than I ever wanted it to be. The manipulations and cover-ups were quite blatant, and I take a lot of care to not only lay them out in the book but show their devastating effects on the environment and the coastal residents. Considering our current political climate, studying the ways in which BP and the government obfuscated during the Gulf oil crisis acts as a primer, a very cautionary tale, for what we are experiencing today.

CO: Your journey from a speechless, terrified child, to “witness-bearer, chronicler, storyteller, truthsayer,” is made possible, perhaps, by the trauma you’ve experienced, both as a child, a survivor of violence, and more recently as an “environmental refugee.” Is it possible to be grateful for the things which upend our very core?

CMF: Absolutely! It is a nuanced form of grateful, to be sure. But if I wasn’t grateful for surviving the travails in my life, grateful for gaining insights and lessons from them, grateful for being able to practice forgiveness and—when forgiveness isn’t in the cards—grateful for a joyful insistence on moving forward, then I would just be a dusty, bitter crank who doesn’t contribute to the universe’s positivity. I would be my own worst enemy.

CO: You began as a novelist, but this is not your first memoir. Your first memoir, When Katie Wakes, and now this one, A Million Fragile Bones, both share a narrative of complicated, fragile stability that’s shattered. In each, you quickly learn that to trust that people mean what they say, and do right by one another, is a myth born of those who’ve never had to put that to the test. Do you think that’s part of what’s happening in post-election America today?

CMF: I think what is happening in post-election America is a total breakdown of our democratic systems. When one branch—the executive—appears to be bought, paid for, and manipulated by a hostile foreign government, and the majority of members in the majority party in the legislative branch are either part of the takeover or unwilling to stand up for our country, for our democratic principles, then they have put country last and greed first. I know very few people who have not been sorely tested in their lives. But we have people in elected office who behave like school yard, privileged bullies who rule by one dangerous, sick guiding principle: what’s in it for me? They obviously do not care who they hurt in the process. They have healthcare and that’s all that matters. They pass laws that provide tax cuts for themselves while devastating programs to the poor and middle class, and the fact that they benefited is all that matters. They turn a blind eye to Russia meddling in our elections because it helped get them into office and that’s all that matters. We went past right and wrong and straight into a narcissistic stance of greed dressed in piety a long time ago. I do not know why it is a tradition in this country to vote against your best interests or why people believe and support politicians even after they have proven themselves to be liars who are concerned only for their own well-being. And the true danger in all of this is that the Disaffected Voter numbers will grow, leaving us with fewer and fewer citizens participating in the democratic process. This goes back to my insistence on moving forward with love and positivity, even in the face of tragedy. Giving up is a form of death.

CO: Many of us are having a real crisis of faith that we, as citizens, have any real power to affect change. You wondered in the book whether the Deepwater Horizon disaster may lead to increased awareness of the hazards of deep ocean drilling, and increased governmental and citizen involvement. In the book, we could see your vision slowly start to clear, as you recognized the dreadful reality: “The Gulf was a tragedy waiting to happen thanks to BP’s corporate culture that rewards cost-cutting while quietly muttering ‘oops’ when the inevitable happens: human fatalities, dead animals, a ravaged environment.” When we look at the conditions that resulted in environmental disasters like the Deepwater Horizon (like Hurricane Katrina, like the drought that’s resulting in famine across four African countries, like so many others), do you think we’ve got to start seeing disasters not as accidents but as results of decisions people have made?