This is the second post in a Ploughshares series where Charlotte Donlon interviews people who promote and support writing and creativity. The other posts in this series can be found here.

The Neighborhood Story Project (NSP) began in New Orleans in 2004 when Abram Himelstein and Rachel Breunlin started meeting with high school students at John Mcdonogh Senior High. Rachel (whose background is in anthropology and literature) and Abram (whose background is in creative writing and publishing) worked with six writers over the course of one school year to help them create books about their neighborhoods. In June 2005, the NSP published five books by these students. Since 2005, the NSP has published 13 different books by students and adults from the New Orleans area. Close to 50,000 copies of these books have been sold.

The Neighborhood Story Project is a collaborative ethnography organization. That means the NSP facilitates the study of the customs of people and cultures. They provide support, guidance, and teaching to residents of New Orleans who then conduct interviews and write books about their place and its people. In collaborative ethnography you co-create. This impacts how people claim ownership and the future of the finished products—the books end up having lives of their own that aren’t tied to sole individuals. After the stories are gathered and written, everyone involved with the project helps with the editing process to produce the final product. This is not always clean and pretty. Sometimes there are heated discussions and fights between collaborators. But these conflicts usually lead to a sort of new creative energy that provides insight for those involved, as well as breakthroughs in their projects.

Rachel says many of the books published by the NSP have flowed out of previously published NSP books because story lines tend to feed into other story lines. When the John McDonough Senior High students’ books were published in 2005, some members of the Nine Times Social and Pleasure Club took an interest in one of the books that focused on their neighborhood, the Ninth Ward. That interest eventually developed into another popular NSP book project, Coming Out the Door for the Ninth Ward.

Social and Pleasure Clubs are African-American benevolent associations that have been around for over a hundred years. Each club hosts an annual parade called a second line to commemorate its anniversary. Second lines are massive participatory parades that people join in as the parade, led by a brass band, passes by. Important places and special moments that have impacted the community are commemorated by being included on the parade route. 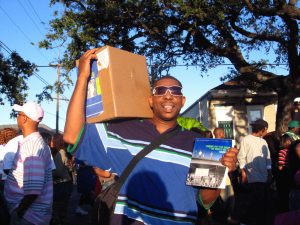 For Coming Out the Door for the Ninth Ward, seven writers from the Nine Times Social and Pleasure Club worked together to interview more than 50 residents of the Ninth Ward and members of the second line community. The resulting book was released in November 2006 when their annual parade took place. More than 500 people attended the book release party and over 3,000 people came to the second line parade that wound through their neighborhood. The following year, Coming Out the Door for the Ninth Ward was chosen for the citywide “One Book, One New Orleans” reading program. All residents of New Orleans were encouraged to read it in order to learn more about the history and culture of social and pleasures in the city.

In a November 2006 interview with NPR, one of the writers for Coming Out the Door for the Ninth Ward, Corey Woods, spoke about his involvement with the project. He said, “I was like we writing a book – Nine Times? But what we going to write about? I gave it a shot, you know. And as it went on we just met the children, writing about the South, interviewing different people who had a major part in our community. I try to write the truth, try to express what I really feel about things and this is how it was.” Another writer for this book, Troy Materre, also spoke about the process. He said, “Just sitting still long enough to write, that wasn’t me. I mean I could sit down and talk to you verbally and tell you a good story, but as far as just sitting down and writing it on paper, it wasn’t me. And I feel like it’s making me a better person to sit down and write and continue to write.”

What Mr. Materre mentions here is one reason the NSP exists. Rachel and Abram are committed to the written word and literacy and believe there’s something unique about gathering and writing stories that isn’t captured in other mediums like radio and documentaries.

Another reason the NSP exists is to help individuals see how they relate to the larger world. Rachel loves when the NSP participants connect their own stories to the broader story that exists around them. She says, “In the process of writing the books we often look at how personal stories are connected to historical and cultural movements in New Orleans and beyond. When the writers make these connections their books begin to blend creative writing and ethnography. They get to understand their own agency in a deeper way and the books become much more interesting to read.”

In addition to the connections individuals make during their time working on NSP projects, a larger web across the city of New Orleans has been cast. Through the work of the NSP, a beautiful network of people across the city has developed that crosses race and class and institutional affiliation. Some NSP projects have brought together collaborators from very different perspectives to create books together while different organizations in the city participate by providing archives and images. One example of this is a current book project with the Fi Yi Yi Mandingo Warriors (a Mardi Gras Indian Tribe) and the Backstreet Cultural Museum.

It’s important to note that the NSP and their books and projects wouldn’t exist if the University of New Orleans wasn’t committed to the organization and its work and mission. UNO supports the program financially and provides some of the infrastructure, as well. The NSP has also received grants and funding from other organizations, but UNO has been a longterm partner from the beginning with a strong commitment to the NSP and its desire to help others create “our stories told by us.”

During book releases and parties, everyone connected by the NSP web—all of the supporters, writers, and contributors from different backgrounds and different parts of the city—come together to celebrate and honor the finished products that they have helped create. Rachel says these events are where the magic happens.

Tags:Abram Himelstein, Coming Out the Door for the Ninth Ward, Rachel Breunlin, The Neighborhood Story Project