Home
»
Critical Essays
»
The Object in Writing and Art 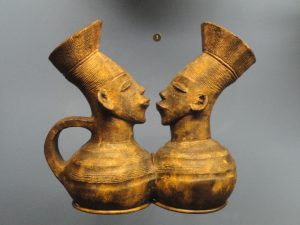 I didn’t learn how to write by studying the craft or by reading literature. I learned how to write by going to art school and becoming a visual artist. Color, light, perspective, scale—I use these same visual tools in my writing. But of all the practices I use as an artist, the practice of using objects has helped my writing most.

The history of the object in art is long and robust. Marcel Duchamp, with his “readymade” work, is largely credited with beginning this trend. His piece, Fountain, from 1917 was a porcelain urinal displayed on its side. Initially rejected by the art world, it is now considered one of the most influential artworks of our time.

The surrealist movement that followed, aimed to subjugate our preoccupation with logic and reason by taking the ordinary object and manipulating it in unexpected ways. It was a movement influenced by Freud’s theory that the truth was not found in consciousness or reason, but in our dreams and subconscious states.

In 1962, Andy Warhol’s Campbell’s Soup Cans went on display at the Ferus Gallery in Los Angeles and the work has remained an icon of our culture ever since. By changing the context of a mundane household object, he changed its meaning. The ordinary object became a commentary on the manufactured lives we live; a commentary that still resonates today.

Perhaps nothing illustrates the visual artist’s obsession with objects more than the still life painting. Still lives enshrine the ordinary in altars of almost religious glorification.

Visual artists see beauty in junk. In almost every found object, whether a rusty nail or discarded household item, there is potential to make art. We are experts at transforming the banality of stuff into magnificent things. The object is the visual artist’s holy grail, but like body language, writers often leave objects out. If objects appear at all, they are frequently generic, or relegated to the background as mere placeholders that indicate a setting.

But our objects contain our stories. The chair we sit in, the purse or wallet we carry, the toothbrush we use, the food we eat, the glasses we wear–these items have hidden meaning. Cleaning people can know almost everything there is to know about us because the objects that surround us put our secrets in plain view. And how we use these objects can disclose character. The bent tip on a kitchen knife tells us something about the impatient soul who couldn’t wait to open a package.

The most interesting aspect about the TV show Antiques Road Show is not the antiques themselves, it’s the tales behind them—someone found a vase in the garbage worth a million dollars, someone’s great, great, grandmother disguised herself as a man to fight in the Civil War and this is the helmet she wore.

Objects help us understand our habits. The New York City Sanitation department has its own trash anthropologist for just that purpose. There is now an area of study called garbology. Like anthropologists, garbologists seek to understand our civilization through the things we use and throw away. Archaeologists help explain the evolution of our species through the objects left behind. Shards of ancient pottery become artifacts in museums not because they have intrinsic value but because they tell our ancestors’ stories.

In the ordinary we find the extraordinary.

“To see a world in a grain of sand.
And a heaven in a wildflower,
Hold infinity in the palm of your hand,
and eternity in an hour.”

If the world can be seen in a grain of sand, imagine what we might see in a hammer: the symbol of progress or destruction, oppression or freedom, the conflict between classes, a commentary on communism and human rights. Imagine the rich themes that we could mine from a knock-off Gucci handbag, or from a character’s collection of Norman Rockwell coffee mugs: false hope, unattainable happiness, innocence, comfort, simplicity. Depending upon what you do with them, objects can hold infinite meaning.

The next time you sit down to write, try thinking like an artist. Try starting with an object. Pull the objects in your scene forward and embed them with meaning or juxtapose them to change their meaning. Personify them or turn them into visual puns like artists love to do.

The world we live in is filled with objects. There are 300,000 items in the average household. Overconsumption may someday destroy our planet, but we can’t seem to help ourselves. We love our things. Don’t let those things go to waste. Use them in your stories and make them work for you.