Home
»
Uncategorized
»
The Other Typist 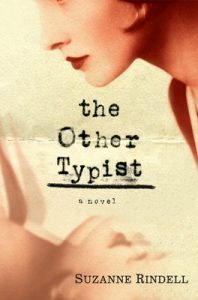 The Other Typist, a crime mystery nestled inside a lovely period piece, is the story of Rose Baker, a stenographer at a Manhattan police station in the early 1920s. Rose is particularly well-suited to her job: an unflappable, meticulous person, she was raised by nuns to be a proper lady. Her life is spartan and sensible, her politics entrenched in a strict Victorian morality.

Then in walks the new girl at the precinct, Odalie Lazare—a femme fatale in a bob cut. She smokes, she parties all night at the local speakeasy, and everywhere she goes men bend to satisfy her desire. Uptight Rose, of course, cannot help but be completely infatuated. And Odalie, too, takes an interest in her fellow typist, drawing Rose deep into her web of bootlegging, bribery, and worse.

From the very beginning, the pleasure of The Other Typist is watching Rose and Odalie in their inevitable downward spiral. Rose herself narrates, reflecting upon the numerous turning points where—she now sees—she went wrong. We watch Odalie manipulate Rose in a series of well-crafted ploys to gain her trust, all the while getting hints that Rose is more than just an innocent victim.

Rindell nails Rose’s character flaws, and thus makes the entire transformation completely plausible; in this world where statements and confessions hold enormous weight in determining guilt or innocence, we read Rose’s confessions with anticipation, wondering even through the end who she has implicated and who she exonerated.

A contemporary audience, with ninety years of crime drama and psychological fiction under our belts, will likely not find the ending nearly as shocking as Rose’s constant hints suggest it will be. But the climax is satisfying enough—and the epilogue a worthy play on the constant shifting of identities in opposition and in parallel.

History is made by women as much as men—and with the 1920s very much in vogue right now, courtesy Baz Luhrmann, it is refreshing to see a period piece through female eyes. Hopefully our renewed interest in Gatsby’s Roaring Twenties will inspire readers to pick up The Other Typist, too.